Tottenham have had their last three games postponed but are set to return Sunday at home when Liverpool pay a visit. It's a brutal spot for Spurs, but we find the EPL betting value in our picks and predictions.

Liverpool kept pace with league-leaders Manchester City on Thursday with a win over Newcastle but they face squad uncertainty this weekend as they make the trip south to London.

Sunday's opponents, Tottenham, have endured their fair share of positive tests themselves as the Premier League gets further complicated amid the congested December fixture list. Spurs have had their previous three games postponed but everything points toward this game remaining as planned.

Here are our free soccer picks and predictions for Tottenham vs. Liverpool, with kickoff set for December 19.

Little wind and no rain is forecast for North London on Sunday afternoon, while temperatures are expected to be around 45 degrees Fahrenheit at kickoff.

If there was ever any questions about the depth or mental toughness of this Liverpool team, they were answered emphatically on Thursday. Just hours before kickoff, the home Reds learned both Virgil van Dijk and Fabinho, arguably two of their three most important players, had tested positive for COVID-19 and would be forced to miss the meeting with Newcastle United. Then, just after the five-minute mark, a Liverpool error led to a Newcastle goal and just like that, the undermanned hosts were behind.

Yet, 90 minutes later, Liverpool were leaving the pitch as 3-1 winners after a dominant showing. Of course, the quality of their opponent is a caveat but it was a hugely impressive display capped off by as good of a goal as you can see. It wasn't a question but it's been reaffirmed countless times this year: Liverpool are back healthy and back in the big time as a worthy title contender.

Liverpool are the league's best attacking team by almost any measure, with considerable distance between themselves and the next closest team in goals and expected goals. In defense, they are right there with City, elite at defending from the front but backed by a superb backline and goalkeeper. They're a force to be reckoned with and now it's Spurs' task to do so, amid a weakened squad and having last played on December 5.

Prior to Spurs' season coming to a halt, they had reeled off three straight league wins as Antonio Conte began to put his fingerprints on his new squad. However, there are still levels to the Prem, and Tottenham are nowhere close to Liverpool — even in ideal circumstances. The Reds' goal difference is +35, compared to Spurs' -1, while the xG difference reads Liverpool +28.8, Spurs +0.5.

Fairness has gone out the window in the name of the show goes on since Project Restart last year but Tottenham restarting their campaign with this fixture is absolutely brutal. The show goes on and so too does Liverpool's title challenge.

Unsurprisingly, for a team that has scored 48 goals in 17 games in the league, Liverpool's 1-0 win over Aston Villa last weekend was just the third time all season they had failed to score multiple goals. They've routinely torn teams apart in devastating fashion, scoring three or more goals on 10 occasions. Even their three one-goal showings saw them create 2.5+ xG, with luck just not in their favor on those days.

For Spurs' part, while Harry Kane remains maddeningly lethargic since returning to the club, they have been more intentional going forward since Conte took over. They've scored multiple goals in each of their previous three league games and Lucas Moura's relentless energy and movement appears to be a great fit in Conte's team, giving Son Heung-min a worthy partner while Kane works out the sluggishness plaguing him.

There's a very real chance Spurs are completely torn apart here but with van Dijk and Fabinho's status still uncertain, Tottenham could pull one back too. The Over is the safe play.

Barring further positive tests for Liverpool (which very well could lead to another postponement), this should be a decisive win. They're well in the rhythm of the season at the moment, with two games every week for nearly a month now and winning their last eight in all competitions. The squad rotation has been nearly flawless, with bit-part players like Alex Oxlade-Chamberlain reemerging as genuine contributors. They are an elite team on auto-pilot at the moment.

To meet one of the world's best teams in such great form after several weeks off will be devastating to Spurs. Though they've been able to train for most of the week, the difference in fitness will be noticeable — even more so when considering Liverpool can stun teams and run circles around them even at the best of times.

A win for Liverpool is locked on here and to get such good odds on a win by multiple goals is our best bet. 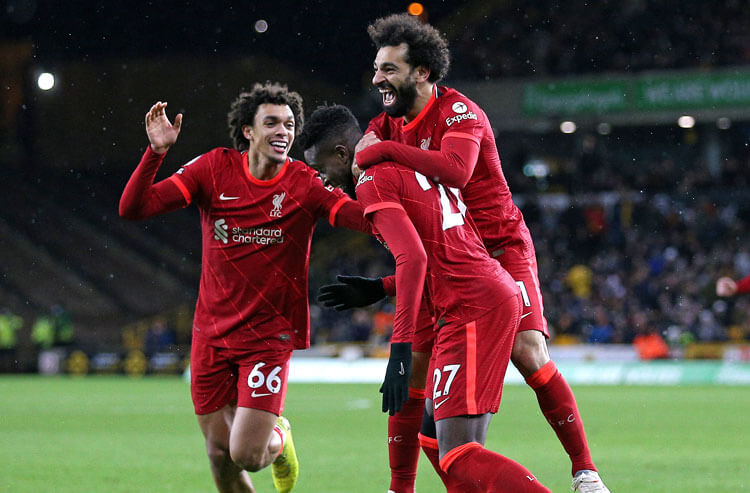 Tottenham vs Liverpool Picks and Predictions: Red Juggernaut Rolls Through London
Provided by