Arsenal have rebounded from an early-season dip, while Manchester United have belatedly done the same since firing Ole. As the two European hopefuls meet at Old Trafford, expect a tightly contested game — find out more with our EPL betting picks.

The midweek Premier League betting slate continues with a pair of matches on Thursday, including a big six clash at Old Trafford.

Arsenal will follow up a decisive win over the weekend with a trip north to take on Manchester United, who took a point off Chelsea at Stamford Bridge on Sunday.

Here are our soccer picks and predictions for Manchester United vs. Arsenal, as No. 5 visits No. 8 in the table on December 2.

Clouds are forecast in a dry, cold night in Manchester Thursday, with temperatures forecast around 35 degrees Fahrenheit at kickoff.

Manchester United looked like a new side over the weekend. While perhaps a bit lucky to get a point in their draw with Chelsea, the organization in defense and midfield was noticeably improved. However, the lack of quality in defensive midfield and in a depleted backline was still apparent, with Chelsea creating 2.9 expected goals and getting away 23 shots.

The biggest change, however, came in attack, where Man United pressed aggressively and won the ball back in the attacking third several times. It's not a coincidence this departure from the norm came with Cristiano Ronaldo on the bench, with the aging superstar entirely unhelpful out of possession. With the high press working well against Chelsea and Jadon Sancho stringing together his two best performances for the club yet, Man U should line up with the same frontline.

Arsenal, meanwhile, continued their strong run of form as they dominated Newcastle United 2-0, with the Geordies getting a single quality chance over 90 minutes.

For the most part this season, Arsenal have been potent in attack, with their midfield three superb behind Pierre-Emerick Aubameyang. Emile Smith-Rowe and Martin Odegaard are modern attackers in their fluidity of movement and ability to thrive in the half-spaces, while Aubameyang and Bukayo Saka stretch the opposition vertically.

Crucially, too, is that they've found a back four that works well together and is backed by arguably the Prem's best goalkeeper this season, Aaron Ramsdale.

The two big six clubs have had similar seasons in many ways, particularly if Manchester United's post-Ole upswing continues. The smallest of margins separate the two in xG and xG against, so much so in fact that they're level on xG differential (-4.6). Arsenal are the better team and have had a stronger season on balance but Thursday's hosts get credit for recent showings. Add in the advantage of playing at Old Trafford, and we like a draw here.

After a shaky start to the new season, Arsenal's defense has improved considerably as new signings Ramsdale, Ben White, and Takehiro Tamiyasu have settled in. Other than in games against the three title contenders in City, Chelsea, and Liverpool, they have effectively blanked opposition attacks. The other 10 fixtures they've played in the league this year have seen them average 1.1 xG against, which would be an elite mark across an entire season.

It isn't quite as positive for Manchester United, whose defensive record is not much worse than Arsenal's — but lacks the upside we've seen from the Gunners. Man United have conceded the fifth-most goals and xG in the Prem this season, while even the removal of Liverpool, City, and Chelsea leave them with a per game average of 1.37 xG against — a mediocre, midtable mark.

There were good moments for Man United against Chelsea over the weekend, with the midfield three of Fred, Scott McTominay, and Nemanja Matic providing considerable stability. While they were lucky not to concede more against an undermanned Chelsea attack, there's also plenty of reason to expect further improvement as there have already been noticeable improvements in the squad's organization and individual performances in the week since Michael Carrick took charge.

Both teams should find a goal in this one but with improving defenses and what should be a tightly contested game, a 1-1 seems likely.

With the suspect backline of Man United partaking in this one, we want to look toward an Arsenal attacker to score. And, who better than captain and striker Pierre-Emerick Aubameyang, who is once again leading the line for the Gunners and backed by a terrific trio in attacking midfield. In six meetings with Man United since coming to the Premier League, Aubameyang has scored four times.

Though the Gabonese striker's production has cooled over the last couple of seasons, with a goals per 90 mark of .38 this season and .39 last season in the league, he remains the club's top scorer in the Prem (4) and across all competitions (7). While his production may be slowing, his pace is not, as he remains one of the league's most devastatingly quick strikers. That, in particular, has us loving this matchup, as the likely center-back pairing of Victor Lindelof and Harry Maguire is a slow-footed one, and the other speedster in Arsenal's attack, Saka, is a doubt to play.

We're getting a great number on Aubameyang's anytime goal prop, at +175, as he's the starting striker in a team considerably more likely to score than not. And, to boot, the captain is Arsenal's penalty taker, and Manchester United have conceded the second-most penalties this season (3). 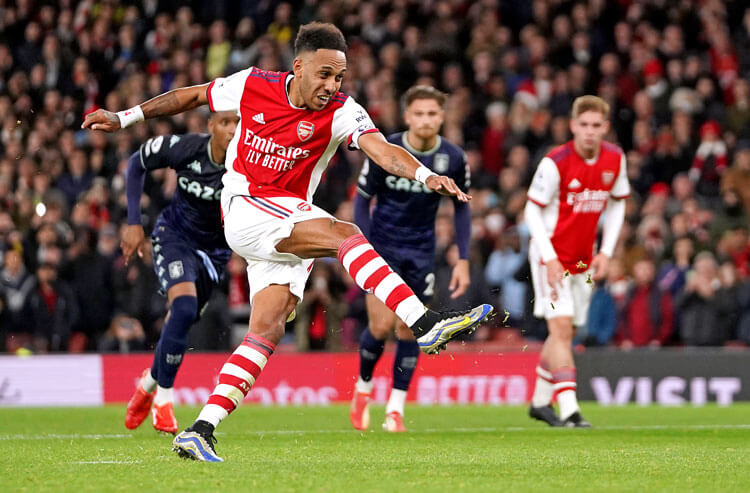