Liverpool vs Chelsea Picks and Predictions: Drawn and Quartered

Liverpool and Chelsea have both struggled so far in this EPL campaign, and with injuries still besetting both sides, a low-scoring game with few edges may be in order, as our soccer betting picks reveal.

While it’s always a big match when Liverpool and Chelsea do battle, very rarely can it be defined as a mid-table clash. That’s exactly what we will have at Anfield this Saturday however, as both clubs are well short of where they anticipated they would be at the midway point of the Premier League season.

The Reds enter the weekend sitting ninth in the table, level on points with Chelsea albeit having a match in hand. More importantly, they sit 10 points behind Newcastle for the final Champions League spot, and know getting three points would be maintaining that challenge for a top-four spot.

The Blues continue to splash cash in the transfer market but still can’t find a reliable source of scoring. With just 22 goals in 19 outings, they have their lowest midway-point goal total in more than 20 years and Graham Potter’s seat is getting hotter by the week.

Can Liverpool stay within touching distance of European spots, or will Chelsea get an important victory and placate their supporters? We dive into those storylines and more in our Liverpool vs Chelsea EPL picks and predictions for Saturday, January 21.

Liverpool vs Chelsea picks and predictions

Liverpool are struggling to find goals without Darwin Nunez in attack. While he’s undoubtedly missed some easy chances this season, his 70 attacking sequence involvements are second most on the team behind Mohamed Salah, according to Opta — with only 33 fewer than the winger in nearly half as many minutes. Nunez is expected to be available for the match off the bench, but unlikely to start.

In his absence over the last two matches, Jurgen Klopp has had to tinker and try to make do. Against Wolves in the FA Cup, he started Fabio Carvalho as almost a false nine. He paired Salah and Cody Gakpo in a 4-3-1-2 that bore no fruit in a 3-0 loss to Brighton.

Making matters worse, Klopp’s preferred 4-3-3 setup has been hurt by the loss of forwards Diogo Jota and Luis Diaz, both of whom are long-term absences. Now he enters his 1,000th match of his managerial career, he hopes to rebound from the Brighton match which he called the worst game of his Anfield career.

If this were any other year, you’d wager that’s unlikely with Chelsea being the opponent coming to town. But this isn’t any other year. The Blues have lost three of their last four Premier League matches away from Stamford Bridge, and haven’t claimed a road victory since defeating Aston Villa in mid-October.

To be fair, a team made up of players that are injured for Chelsea could very well beat the one he will field on Saturday. Reece James, Ben Chilwell, N’Golo Kante, and Denis Zakaria are just a few of the names that currently reside on the unavailable list.

So too is that of Joao Felix, who will serve the second match of a three-match ban following his straight red card in his debut against Fulham. Felix’s short spell on the pitch showed the quality that Chelsea is lacking in attack, a key reason for their subpar goal output this season.

Kai Havertz isn’t a pure striker but he’s doing his best, and his best was just good enough last weekend as his 64th-minute header gave Chelsea a 1-0 victory over Crystal Palace. It was just their second Premier League win in their last 10 matches, five of which have been defeats.

These two teams are so inconsistent that it’s difficult to pick a winner. Both of these teams would be contending for Europe if they weren’t so beset by injury, and it would make this weekend’s match a truly entertaining and exciting affair. All that said, right now we are looking at two squads that are trying their best to fill gaps and many players in unfamiliar roles.

That’s why I’m on the draw for this one. While it’s not necessarily the bet with the highest odds of winning, I believe there is immense value at +280. All four meetings between these two teams last year — including two domestic cup finals — ended with a level scoreline at the end of regulation.

There has been very little to separate these two teams who are facing off for the 61st time in the Premier League. With neither team having a clear advantage on Saturday, I expect that to yet again be the case.

Liverpool vs Chelsea side analysis

We’ve already discussed the moneyline for this match in terms of the value on the draw, and the recent history for these two teams, so we won’t dive too deep into that. However, there is a bit more team news to discuss.

In addition to the names already mentioned, Klopp will be without the services of forward Roberto Firmino this weekend. Gakpo and Salah are likely to start but the position of Gakpo will depend on whether Nunez starts or not. If he doesn’t, I expect Gakpo to take up the central role, which could lead to fewer shots for him but perhaps a better chance of scoring.

Keep an eye on Chelsea’s starting lineup,, as Havertz wasn’t in training on Wednesday, and the club hasn’t released a reason as to why. Were he to miss, Pierre-Emerick Aubameyang would likely take his place. The Blues will also be without Wesley Fofana, Christian Pulisic, Raheem Sterling, Armando Broja, and Eduoard Mendy for this weekend.

Chelsea hasn’t tasted defeat in their last two trips to Stamford Bridge, winning once and drawing once. That said, they’ve gone five away without a win, and have lost three in that span. Liverpool have won four of their last five at home in the league, with just one defeat all season. That’s a big reason why they are the favorites, because at the end of the day, it’s still Anfield.

If you watched the two aforementioned Cup finals between these two sides last season, I know how bored you were. Both fixtures went to penalties with scoreless draws, as the two clubs combined for just six goals in their four matches in the 2021-22 campaign.

Liverpool have scored just once in their last two matches, both away from home, in the Premier League. They also scored just once against lowly Wolves this past week in the FA Cup replay. That said, their fixtures have been high-scoring. Seven of Liverpool’s last eight matches in all competitions have seen at least three goals scored, with five of them having four or more goals on the day. The Reds haven’t kept a clean sheet in eight straight league matches.

Chelsea’s last seven Premier League fixtures have gone Under three goals all but once, that being a 2-1 defeat to Fulham where Felix was sent off. Five of those matches have failed to see at least one side score.

Given the lack of attacking options for both teams, and Chelsea’s issues with finding goals, there is a bit of value on the Under 2.5 in this game. That said, I’d likely wait to see if Nunez is going to start. If he isn’t, the first half Under could be a sneaky play here, allowing you to stay away from late impact from him off the bench.

It will be a chilly but dry afternoon for fans and players alike on Saturday. Temperatures will feel like they’re in the low-30s, with little chance of precipitation. Winds could play a factor, with gusts of 30 mph possible. 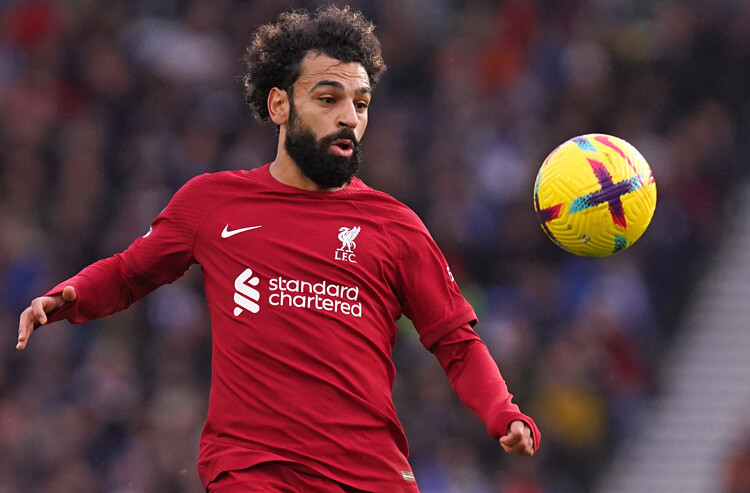 Liverpool vs Chelsea Picks and Predictions: Drawn and Quartered
Provided by