Everton vs West Ham Picks and Predictions: No Clean Sheets at Goodison

Everton and West Ham are facing fears of relegation early in the season, with a healthy amount of concerns for both sides. As they meet at Goodison Park, our EPL picks expect goals not to be of concern for either side.

Two teams will look to work their way off the bottom of the table on Sunday, when Everton host West Ham United at Goodison Park. The Toffees will try to get a win without their goalkeeper and captain, and end their longest winless run to start a campaign in nearly three decades.

West Ham will hope their forwards can find the back of the net, with goals in short supply this season for the Hammers. Their recent run of form will have them hopeful they can once again go into Goodison and get points.

Let’s break down the matchup in our Everton vs. West Ham United picks and predictions for Sunday, September 18.

Everton have conceded just six goals this season, despite having an expected goals against of 10.3 through their first six matches. That league-leading differential is down to the heroics of goalkeeper Jordan Pickford and his heroics are the only reason that Everton are not in the relegation zone at the moment.

Unfortunately for the Toffees, they won’t have Pickford to bail out their poor defending on Sunday. He will miss the match against West Ham, as well as England’s upcoming international ties, after suffering a thigh injury against Liverpool two weeks ago. Asmir Begovic will be his stand-in, a man who stopped only half the shots he faced in limited action last season.

West Ham’s three goals in the Premier League are the fewest of any side, but they managed to score three times in each of their UEFA Conference League matches in the past week and a half.

Summer signing Gianluca Scamacca has yet to score in the Premier League, but has already found the back of the net in three of their four Conference League matches, including qualifications. His goal on Thursday was one of three goals for the Hammers before halftime, something they’ve yet to do in any of their six Premier League matches.

Everton will welcome the news that striker Dominic Calvert-Lewin and midfielder Abdoulaye Doucoure could return on Sunday, especially given their struggles to score this season. Their four goals are just one more than West Ham, Wolves, and Bournemouth have tallied this campaign, and one of those four was an own goal. They are still awaiting the first goal from a striker this season.

West Ham will hope that Michail Antonio can find his shooting boots, as he’s scored just one goal this season. The striker will likely regain his place in the lineup ahead of Scamacca, although both will likely see time on the pitch. West Ham have the third-fewest touches in their opponent’s 18-yard box of any side this season, but Everton are conceding the fifth-most in the league.

I don’t trust either side to get a win on Sunday. West Ham have won each of their last two trips to Goodison Park 1-0, but their defense this season has been horrid. Meanwhile, Everton have been bailed out repeatedly by Pickford, and Begovic is often good for a critical mistake every match.

What I do trust is that both defenses are going to concede chances, and that neither is likely to keep a clean sheet. That’s why, for me, I’m all over both teams to find the back of the net in this fixture, a feat that has happened in four of Everton’s six matches.

Everton have yet to secure a single win through six matches, and failure to secure all three points on Sunday would see them go winless through their first seven matches for the first time in nearly 30 years.

If they were to draw, it would be their first run of five consecutive draws in 35 years. Everton have lost just once, however, as they fell 2-1 to Aston Villa in the second match.

West Ham have just one victory this season, a 1-0 away win at Aston Villa, which has them sitting in the drop zone at the moment. They’ve lost seven of their last nine away matches in the Premier League, winning the other two. Since the start of the 2022 calendar year, only Everton has lost more away matches than the Hammers.

The last six matches between these two at Goodison Park have seen one side take all three points, as have each of the last five meetings at all locations. The books have West Ham as the slight favorite on the three-way line, as well as in a draw/no bet scenario.

The last six meetings between these two sides have seen two or fewer goals scored, but their last meeting in the spring saw West Ham take home a 2-1 win.

On the season, Everton have seen five of their six matches fail to reach three goals, with both teams scoring in four. In their last 11 home matches at Goodison Park, the total has failed to reach three in nine of them.

West Ham have also seen three goals scored just once in their six Premier League matches this season, as they fell 2-1 to Chelsea their last time out. That match should have ended 2-2 but VAR denied them an equalizer and later apologized for doing so. Three of their matches have seen multiple goals scored, and their last two have seen both teams finding the back of the net.

Due to the goal-scoring struggles for both sides, the books are favoring this to be a low-scoring affair. However, the loss of Pickford and the potential return for Calvert-Lewin boosts the scoring chances for both sides in this fixture.

It will be a chilly and potentially wet afternoon in Liverpool, with temperatures in the mid to low 50s and a decent chance of rain throughout the day. 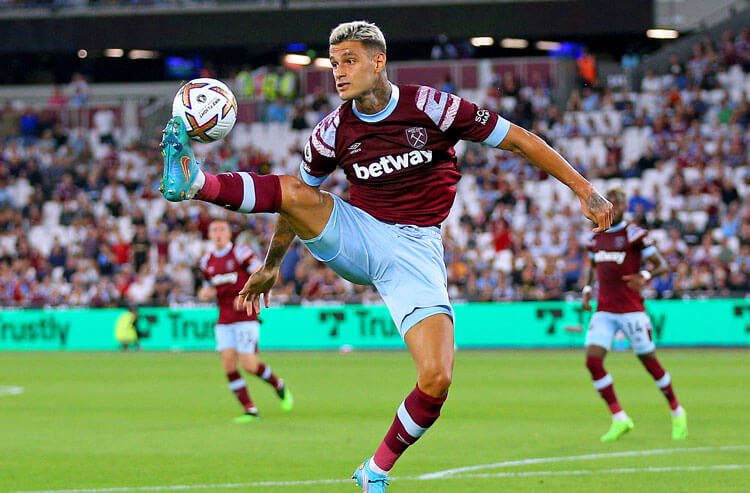 Everton vs West Ham Picks and Predictions: No Clean Sheets at Goodison
Provided by