The Netherlands were one of the most dominant teams in the group stage and can continue to cruise in their Round of 16 tie with the Czech Republic. Can the Czechs challenge the flying Dutch? Check out our tips and predictions.

Euro 2020 enters the Round of 16 this weekend with the Netherlands and the Czech Republic facing off on Sunday.

The Dutch flew through group play and are expected to keep rolling with Euro 2020 betting lines installing them as -154 favorites for Sunday's contest at Ferenc Puskás Stadium in Hungary. A Czech victory pays out at +450 with the draw play at +290.

Here are our best free Netherlands vs. Czech Republic tips and predictions for soccer action on Sunday, June 27.

It's expected to be a hot and sunny day in Budapest with temperatures reaching 87 degrees Fahrenheit.

The Netherlands used to be a football powerhouse but failed to qualify for both the 2016 European Championship and the 2018 World Cup. However, with a young squad led by Frank de Boer, the Dutch look poised for a resurgence.

They went 6-1-1 during Euro qualifiers with their lone defeat coming against Germany, a side they would defeat 4-2 later that year. Netherlands steamrolled their competition in Group C, going 3-0-0 and scoring eight goals while conceding two.

The Czech Republic had a tougher time in a more competitive Group D, beating Scotland 2-0 and drawing with Croatia but losing to England. The Czechs have imposing size that they can take advantage of on set pieces, but when it comes to open play, they are less impressive.

The Netherlands are more creative in the midfield and have the pace to get behind the Czech backline. Meanwhile, the Czech attack simply doesn't have the firepower to keep pace with the Oranje. Expect the Dutch to keep flying.

De Boer has certainly come under fire for his use of a 3-4-1-2 shape as opposed to the 4-3-3 attacking setup that the Dutch used in the Golden Days. However, the Dutch have played with plenty of attacking flair in this tournament, thanks in large part to outside back Denzel Dumfries.

The Oranje have scored at least two goals in ten straight international matches and the last time they were held under that number they scored one goal against Italy. Considering that Italy hasn't conceded a single goal in 10 matches since, we'll try not to hold that against the Netherlands.

That said, with such a fluid and open attack there are always questions in defense, and the Dutch having to play this tournament without their best defender in Virgil van Djik is a tough pill to swallow. The Czechs will be missing a key defender of their own on Sunday, with Jan Boril serving a suspension after a yellow card against England.

Eight of the Netherlands' last 10 matches have gone above the total and the Over 2.5 goals also cashed in seven of the Czech Republic's eight Euro Qualifiers. 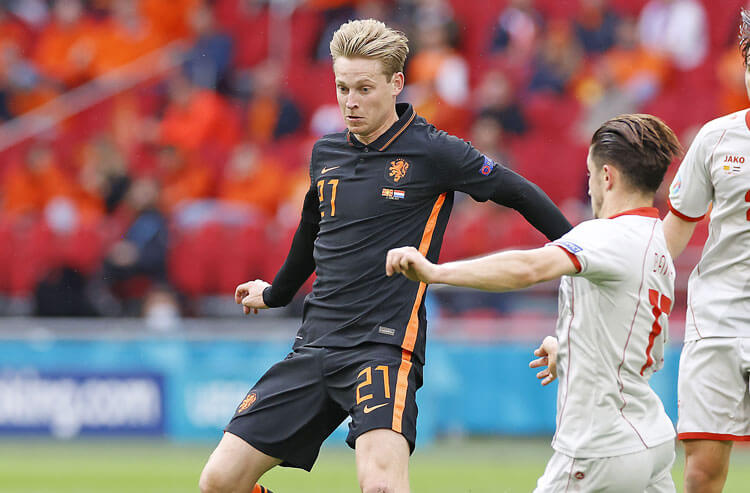