Patrick Viera's Crystal Palace have taken a considerable step back this season and it's worsened since the World Cup break. Now welcoming red-hot Manchester United to Selhurst Park, our EPL picks expect bad to worse for Palace.

Manchester United’s win over rivals Man City on Saturday puts their showdown with Arsenal this weekend in the spotlight but if they hope to have a shot at competing for the title, the Red Devils must first handle a trip to Crystal Palace on Wednesday.

Man United have lost just four matches this season, but three of those have come on opposition ground. Palace will hope that bodes well for them, as they’ve failed to score in their two matches at Selhurst Park since play resumed post-World Cup.

Patrick Vieira’s men desperately need a win to stop their poor run of form, with four defeats in their last five.

Find out how that can create some betting opportunities for you in our Crystal Palace vs. Manchester United picks and predictions for Wednesday, January 18.

Wednesday’s match will be Man United’s 19th of the campaign, which means yellow card accumulation hasn’t yet reset. As such, Casemiro and Fred would be suspended for the Arsenal match if they were to pick up their fifth yellow card against Palace. Erik ten Hag may want to rest Marcus Rashford, who picked up a knock early in the City match but played through it.

That could be just what Crystal Palace need to try to regain some confidence. It’s been more than five years since the Eagles failed to score in three consecutive home defeats but that’s exactly what they face here, having lost their previous two home tilts against Tottenham and Fulham by a combined 7-0 scoreline.

Those were two of the six defeats Palace have suffered in their eight matches since the World Cup. The last thing Patrick Vieria will want is to see his side pulled into the relegation battle, but their next four matches will see them play Man United twice, along with Newcastle and Brighton.

Palace are dealing with some key injuries at the moment, and Manchester United are flying high. The hosts had no answer for Chelsea, who have been struggling themselves of late, and no answer for Spurs, who beat them 4-0 at home despite their recent woes.

They’ll have no answer for the Red Devils either.

Take Man United to win this match by multiple goals, with a one-goal victory returning your wager.

If Rashford does start, look for him to continue his ridiculous run of form with a goal and take him to score anytime (+150 at bet365) for a bonus bet — perhaps even parlaying it with a Man United victory for a bigger payday.

B) Marcus Rashford, Bruno Fernandes, and Wilf Zaha to record 1+ shots on target each BOOSTED to +300 at Betway! Bet Now

Palace are the underdogs in this match not just because of their recent form but because of who they’re missing. In addition to James McArthur and Nathan Ferguson, Joachim Andersen was injured against Chelsea and could miss the match. James Tomkins will likely fill in should he miss out, with Vieira sticking to his normal 4-2-3-1 formation.

Man United will hope to see Wout Weghorst available off the bench, if not starting, after his loan deal was completed. Anthony Martial will be a doubt after he picked up a knock against Man City but Antony and Lisandro Martinez could return to ten Hag’s 4-2-3-1 setup after being rested.

Casemiro, Fred, and Rashford could all be rotated to ensure availability for Arsenal at the weekend.

Manchester United have four wins in their last six visits to Selhurst Park, but the last two trips saw a defeat and a draw. Overall, Man United have won three of the last six meetings, suffering two defeats and drawing the other.

With Palace’s difficulties finding the back of the net, it’s no surprise that the Under is slightly favored by the betting public. Their last three meetings at Selhurst Park have all seen two or fewer goals, as well, but five of Man United’s last six matches in the Premier League have featured at least three goals.

Palace have scored in just one of their last five Premier League matches, with two goals in that span. Their two matches at home since the restart have seen them lost 3-0 to Fulham and 4-0 to Spurs, respectively.

Man United haven’t been putting up big numbers away from home this season, scoring multiple goals in just three of their nine away fixtures in the league. However, they’ve conceded one or fewer goals in six of those matches.

Players and fans better bundle up on Wednesday. Temperatures will be near freezing at kickoff, but thankfully no rain is in the forecast. Light winds shouldn’t impact the play. 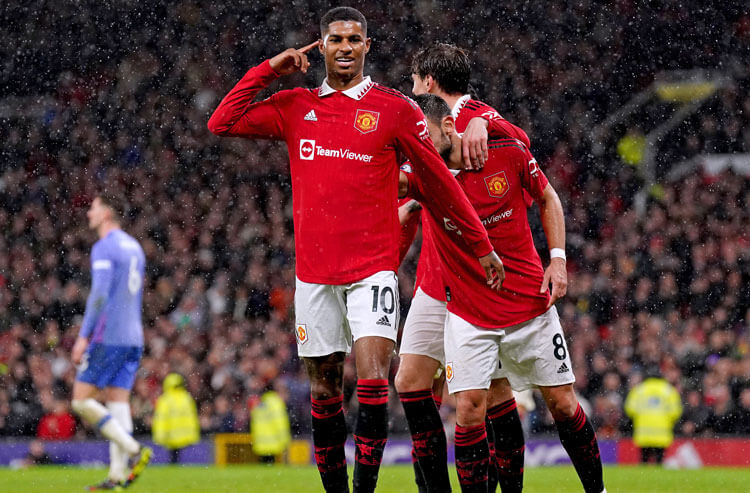