Brighton vs Tottenham Picks and Predictions: A Stalemate on the South Coast

The post-Graham Potter era got off to a thrilling start last weekend with Brighton drawing 3-3 at Anfield. Now hosting Tottenham, our EPL picks expect another competitive showing from Brighton — and more Spurs frustration.

Fourth-place Brighton look to continue their sterling early-season form when they welcome third-place Tottenham to the South Coast on Saturday.

Each side has suffered a single defeat thus far, with Brighton, who have a game in hand, three points behind Spurs. Spurs are coming off a demoralizing and lackluster 3-1 North London Derby defeat at the Emirates, while the Seagulls did new manager Roberto De Zerbi proud in a thrilling, high-octane 3-3 draw at Anfield.

We break down this matchup with our Brighton vs. Tottenham picks and predictions.

Brighton vs Tottenham picks and predictions

Tottenham have the third most goals (19) while Brighton, on a game less, have scored 14, the joint-sixth most in the top flight. Both teams have the propensity to bust open and score in bunches but don’t expect a high-flying, gunslinging proposition at the Amex Stadium.

Only six of Tottenham’s 19 goals have come on the road, a rate of 1.5 goals per match, which is still a solid goal return compared to most road teams.

However, Antonio Conte is renowned for indirectly shutting up shop when Tottenham hit the road. While he doesn’t park the bus like one of his predecessors (Jose Mourinho), Conte prefers his side to soak up pressure out of possession and strike on the counter.

The Italian gaffer has taken ample stick for what many perceive as a tactic and strategy beneath Tottenham, a side brimming with elite individual talent. But Conte isn’t going to shift his mentality, believing steadfastly that Spurs’ best chance of success is breaking at pace on the counter in odd-man situations. It’s hard to argue with a manager who wins everywhere he goes.

So, don’t expect Spurs to control possession, dictate proceedings, and knock the ball around for extended periods.

Spurs have taken five points from four away matches, their only victory coming at lowly Nottingham Forest. Conte’s side is also coming off a pragmatic 0-0 away stalemate in the Champions League against Eintracht Frankfurt. Tottenham missed a couple of golden chances to win but played for the draw, content to put their faith in winning both remaining home matches.

Spurs won’t play for the draw against Brighton, a side they’ll be expected to beat if they have any desire of remaining in touch atop the table, nor will Conte release the shackles and deviate from his heavily ingrained tactics.

Brighton are playing too well for Conte to forsake what has, for the most part, yielded such riches.

While new Seagulls manager De Zerbi will be disappointed about letting two leads slip against Liverpool, he’ll be delighted about leaving Anfield with a point, especially after leveling the contest in the 83rd minute.

The Seagulls kept three clean sheets on the bounce before the last three matches, which saw 16 combined goals.

Only three goals were scored during their three-match clean-sheet run, a stark comparison to the 19 combined in their other four matches. Expect proceedings on Saturday to follow the former’s script, with both teams tactically prepared for a low-scoring scrap.

Brighton vs Tottenham side analysis

Conte is without Emerson Royal and Dejan Kulusevski, the latter of whom leaves Tottenham considerably less formidable offensively. Richarlison is an athletic specimen who causes havoc, but the Brazilian doesn’t have the poise and unerring pinpoint accuracy of Kulusevski’s final ball.

Royal is suspended after receiving a red card on a harebrained tackle in the second half against Arsenal. Expect Ivan Perisic to move to the right and Ryan Sessegnon to fill in on the left.

Brighton are undefeated in three home games, taking seven points from a possible nine. They’ve scored six goals at the Amex Stadium, five of which came against Leicester. The Seagulls managed a single goal in their other two home games, but kept a clean sheet in both.

Conceding just 1.1 goals per game, Brighton have the second-best defensive record in the top flight, which will need to be at its best against a periodically prolific Spurs offense.

After winning just three of their previous 10 against Tottenham, Brighton have enjoyed a recent fruitful patch, defeating Spurs in two of the last three.

The Seagulls enter the contest soaring, tasting defeat just once in their last 11 Premier League matches.

Both teams’ last three games have seen three or more goals, with 16 combined in Brighton’s and 15 in Tottenham’s.

Tottenham’s four away matches are split, with two Overs and two Unders. Two of Brighton’s three home matches resulted in the Under, with the last being the exception.

Brighton exploded for five goals against the league’s most porous away defense, Leicester. The Seagulls are usually tough to penetrate at home, keeping clean sheets in two of three at the Amex Stadium.

Tottenham will look to be ruthless on the counter, while Brighton should boss possession. Look for the match to transpire similarly to Spurs’ trip to West Ham, which resulted in a 1-1 deadlock.

Fall has struck in England as the temperature will be a cool 52 Fahrenheit for the late afternoon kickoff. Winds will be a fairly stiff 18 mph, and humidity is expected to be at 55%. Currently, there is no chance of precipitation. 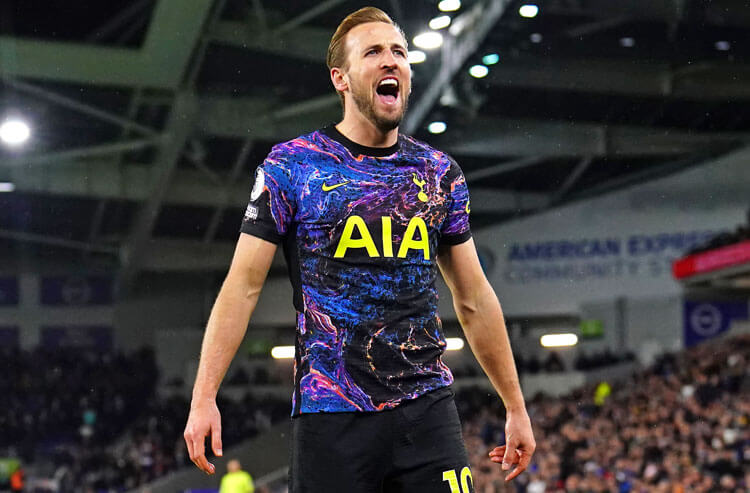 Brighton vs Tottenham Picks and Predictions: A Stalemate on the South Coast
Provided by