Arsenal vs Manchester City Picks and Predictions: Improved Gunners No Match for City

Arsenal continue to play well and appear a good bet to finish in the Top 4. The difference in class between good and elite will be evidenced here with Manchester City coming to London, however, as our EPL betting picks highlight.

Manchester City have begun to put distance between themselves and their fellow title challengers, as Pep Guardiola's team storms through the Premier League in as strong of form as ever. A dominant City team will be a good test for Saturday's hosts, Arsenal, as the Gunners have begun to prove themselves as a strong side in their own right.

Find out if Arsenal can make a statement with a result at home with our soccer betting picks and predictions for Arsenal vs. Manchester City, with kickoff on January 1.

Rain in North London on Saturday morning will slow down by kickoff for Arsenal vs. Man City, with just a 10% chance of precipitation in the afternoon. Temperatures are expected to be around 55 degrees Fahrenheit.

Title race, we hardly knew you.

After the first couple of months appeared to set up a thrilling three-club title race between City, Liverpool, and Chelsea, it's looking more and more likely that City will run away with it as they have multiple times in recent years. They're nine points clear on top of the league with an attack on par with Liverpool's, a defensive record superior to the rest, and unmatchable depth. Currently on a 10 match win streak in the league, it would hardly be surprising to see it extend well into the teens.

While City would rightfully be expected to beat any challenger at the moment, Arsenal shouldn't be a completely simple walkover. The start to Arsenal's season continues to impact their season-long metrics but it's becoming increasingly clear they should be favored to finish fourth after missing out on Europe completely last season.

A defense that haunted them for several seasons has been sorted, with a trio of new signings stabilizing an ever-improving backline. Their attack has reached new heights in recent weeks with the return of Gabriel Martinelli, so much so that top goalscorer Emile Smith-Rowe has been unable to get back into the starting 11.

Yet, it's abundantly clear there's no stopping the City machine at the moment, and the gap between the defending champions and the rest of the league (perhaps with the exception of Liverpool) is massive. City lead the Prem in xG difference per 90, at +1.76, while Arsenal are sixth at +0.12. That difference, of +1.64, is bigger than the one between Arsenal and 20th (Newcastle). Arsenal are a good Premier League team. City are an elite on the global stage.

With almost any total in a matchup including Manchester City, we need to acknowledge the possibility of them topping it on their own. Pep's team is playing as dominant as ever, with the likelihood of them running away with the title increasing every week.

City have scored 51 in 20 games, with an expected goals of 47.6, while leading the league in shot-creating actions per 90 minutes. They've scored multiple goals on 13 occasions already this year and have scored three or more in four of their previous six league games. It's almost certain they'll put at least two past Arsenal here and with COVID forcing key players in defense out for the Gunners, another 3+ day is hardly out of the question.

City's presence alone has us going Over here but not for nothing, Arsenal could help us out with a goal themselves. Their three-man midfield, behind the striker, has been outstanding recently and the attack has gone to another level since Martinelli returned. Arsenal's up to fourth in xG and are fifth in goals scored, and with City potentially without Kyle Walker and John Stones, they could score in this fixture.

Anyone who has followed Raheem Sterling's career for Liverpool and then Manchester City, and England, knows the attacker's form tends to come and go. When he's in form, however, he is as good and as lethal as any attacker in the world, capable of devastating teams in the build-up, cutting inside onto his right foot from the left, or hitting unstoppable shots from distance.

Sterling has found that level of form recently, taking his chance to reclaim a place in the City team during the busy festive period. Over City's previous 10 games in all competitions, Sterling has scored eight times, only going scoreless in two Premier League starts and a 45-minute substitute appearance in the Champions League. Along with Bernardo Silva, Sterling's been their best player as of late, scoring in each of City's previous three league games (including two on Boxing Day).

In current form, Sterling's a great bet to extend his scoring run against Arsenal but even more so in light of recent news. Arsenal right-back Takehiro Tomiyasu, one of the signings of the season, has been ruled out due to a positive COVID-19 test, meaning the Gunners will be without one of their best defenders — and the one who would be tasked with defending Sterling. Without Tomiyasu, Sterling will be able to do some serious damage down the left wing, including adding to his recent goal tally. 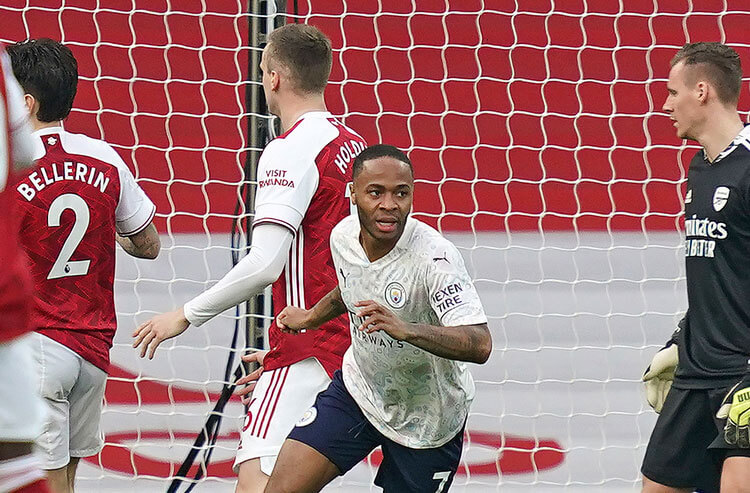 Arsenal vs Manchester City Picks and Predictions: Improved Gunners No Match for City
Provided by