The PGA playoffs kick off this weekend and The Northern Trust odds feature a star-studded field of golfers, with Jon Rahm entering as the pre-tournament favorite. Follow along for updated golf odds at Liberty National.

After PGA betting excitement of the Wyndham Championship's six-way playoff, golf odds are heating up with the FedEx Cup Playoffs getting underway, beginning with The Northern Trust.

Follow along all weekend will our live Northern Trust betting odds.

World No. 1 Jon Rahm comes into the tournament with the best odds at +1,000. Despite a light summer event-wise, Rahm rides in hot off his surging close to The Open (shooting a Sunday 66 to finish third), after winning the U.S. Open and being forced to withdraw from the Memorial Tournament with a large lead. It's tough to argue that anyone's on their game more than Rahm right now.

Second on the odds board are OWGR No. 2 Dustin Johnson and twelfth-ranked Jordan Spieth, who contrast heavily. DJ has been very quiet on the tour this season, missing several cuts while posting no finish better than eighth. But his close to the 2020 season was so absolutely dominant that his name still carries lots of weight. Included in Johnson's demolition of the 2020 playoffs was a victory in this event, in which he set the course tournament record of 254.

Meanwhile, Spieth had a completely dreadful 2020 campaign, but has rediscovered his old magic in 2021, posting a litany of Top-10 results, including a victory at the Valero Texas Open, his first tour victory since 2017. We feel safe calling it a comeback at this point.

The Open champ Collin Morikawa takes the fourth-best odds at +1,800. Morikawa's precocious dominance in majors has been a strong indicator for the 24-year-old's future success. The poise he showed in holding off Spieth last month set the PGA Tour on notice.

Three more household names round out the Top 5, as Brooks Koepka, Xander Schauffele and Rory McIlroy all come in knotted at +2,000.

Where is the 2021 Northern Trust played?

The Northern Trust is played this year at Liberty National Golf Club in Jersey City, NJ, as the tournament rotates between courses on the U.S's northeast coast.

Liberty National is a 7,387-yard par-72 course, with a course rating of 77.7 and slope rating of 155. Designed collaboratively and opened in 2006, the course features bentgrass fairways and greens, and has hosted this event (then known as The Barclays) in 2009 and 2013.

Dustin Johnson demolished the Northern Trust field in 2020, setting a course tournament record at 30-under par, good for an 11-stroke win over Harris English.

What is The Northern Trust payout in 2021? 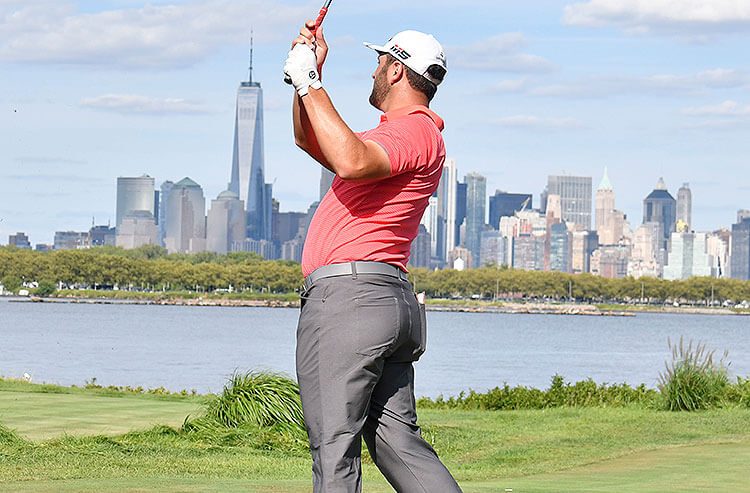 Live Odds to Win The Northern Trust
Provided by