Three-time winners and defending champions Harris English and Matt Kuchar are back and looking to win the QBE Shootout for the fourth time...but they're not the favorites this week. Find out who tops the board in our QBE Shootout odds update.

With all the recent talk surrounding different formats on the PGA Tour, we've got one this week: The QBE Shootout.

The tournament has no FedEx Cup or OWGR points and is listed as an unofficial PGA Tour money event.

Odds to win the QBE Shootout

Three-time winners and defending champions Harris English and Matt Kuchar are back together for this event, trying to win it for a record fourth time. They wiped the floor with everyone last year, winning with a tournament-record 37-under 179, beating out Rory Sabbatini and Kevin Tway by nine strokes (also a tournament record). Though they have strong odds at +650, there are a couple of pairings above them on the pre-tournament odds board.

Topping the board is Sam Burns & Billy Horschel, available at +400. Both guys have won recently - Horschel won the BMW PGA Championship in September, and Burns won the Sanderson Farms Championship a few weeks ago. On top of that, Burns is on an absolute heater, with Top-10 finishes in six of his last nine PGA Tour starts, with the other three finishes being T14, T17, and T21.

Second on the board is Jason Kokrak and Kevin Na, available at +550. Kokrak won the Houston Open a couple of weeks ago and is making his first start in this tournament with Kevin Na, who played in last year's competition alongside Sean O'Hair.

Some other notable pairings include Max Homa and Kevin Kisner (+700), Jason Day and Marc Leishman (+800), and Bubba Watson, who's paired with LPGA star Lexi Thompson (+3,300).

Where is the 2021 QBE Shootout played?

The 2021 QBE Shootout is being played at the Tiburon Golf Club's Gold Course in Naples, Florida. The Greg Norman-designed track is a par-72 that plays just under 7,400 yards.

Harris English and Matt Kuchar won in 2020, setting the tournament scoring record, with a 37-under 179, winning by nine strokes to top their 2013 record of seven.

What is the QBE Shootout payout in 2021? 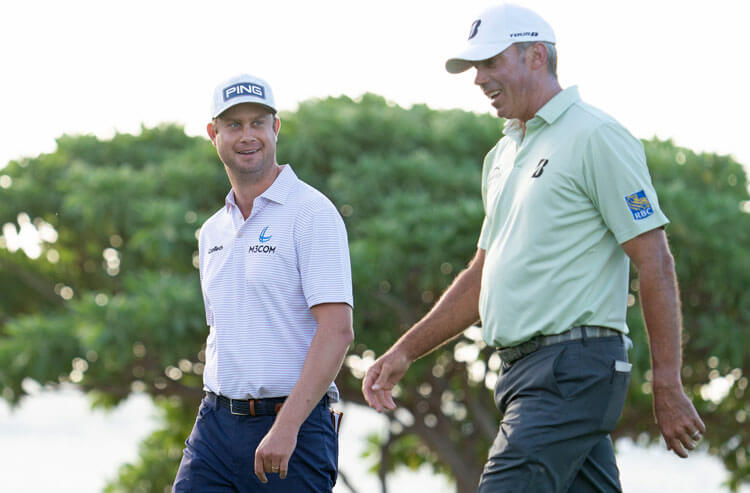