The opening event of the 2022 FedExCup playoffs, the FedEx St. Jude Championship features all the best names from the PGA Tour, but it was Rory McIlroy who entered the week a +1,000 betting favorite. Check out the live odds below as the event unfolds. 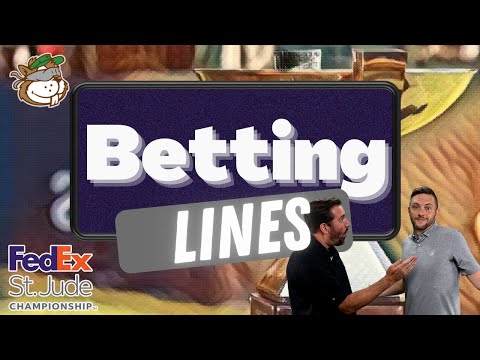 The FedExCup Playoffs will kick off in earnest this weekend at TPC Southwind in Memphis, TN.

The stage is set with FedExCup points leader — and OWGR No. 1-ranked golfer — Scottie Scheffler looking to parlay his breakthrough season into a championship. However, Scheffler is not the betting favorite entering the week. That honor belongs to a two-time champion looking to become the first three-time winner since the cup's inception in 2007.

Here are the odds to win the FedEx St. Jude Championship. You can also check out our lineup of outright predictions.

If you're signing up for a new sportsbook for the FedEx St. Jude Championship, here are two of the best bonuses* available:

Playoff time. With Tommy Fleetwood, Daniel Berger, and Lanto Griffin electing not to partake in the first playoff event for personal and injury reasons, the field is currently set at 122 golfers as of Monday morning. This could expand to 125 with Talor Gooch, Hudson Swafford, and Carlos Ortiz asking to take part in the PGA Tour playoffs despite having defected for LIV Golf. A hearing is set for Tuesday to determine whether or not their request will be granted.

Despite Scheffler's outstanding year, it's McIlroy who is entering the first playoff event as the betting favorite. Rory has won the FedExCup Championship twice (2016, 2019), joining Tiger Woods as the only two-time champion. McIlroy finished sixth in FedExCup standings through last week's Wyndham Championship but is third in PGA Tour earnings this year despite appearing in just 13 events.

Basically, when McIlroy shows up, he is in the hunt, boasting the best scoring average on the PGA Tour. Since missing the cut at the Valero Texas Open in early April, Rory has recorded six Top-10 finishes in eight tournaments, including a victory at the RBC Canadian Open. He finished within the Top 5 in three of four major tournaments and eighth in the other.

He's been off since The Open, prepping for his playoff run. For now, oddsmakers are giving him the edge.

Scheffler hadn't won a PGA Tour event prior to 2022 and is entering the playoffs with four victories under his belt, including his first major at the Masters in April. While he hasn't won since Augusta, he did finish T2 at the U.S. Open and narrowly missed a Top-20 finish at The Open, which was also his last tournament.

The 26-year-old took home $13.1 million in earnings this year. Cameron Smith was second with $9.8 million.

A lot of his success can be traced to how frequently he reaches the green in regulation, with a Tour-leading 72.22% rate.

Rounding out the Top 5 is a trio of guys at +1,800: Patrick Cantlay, Justin Thomas, and Cameron Smith. Thomas is tied for second with nine Top-10 finishes (with Scheffler), trailing only Cantlay — who won the FedExCup a year ago — who finished with 10 while only claiming one tournament title. Smith sits second in the FedEx Cup standings and enters off his first major championship victory at The Open.

The Canadian has been on a steady run despite a fractured rib that sidelined him for several months this spring and summer. Pendrith finished T13 at THE PLAYERS Championship in March and didn't appear again until the Barbasol Championship in July where he also finished T13. He followed that up with a T11 at the Barracuda Championship and a T2 at the Rocket Mortgage Classic where he was within striking distance until Tony Finau pulled away on Sunday.

Pendrith last appeared at the Wyndham Championship last weekend where he, once again, finished T13. His strong run helped him finish 60th in the FedExCup standings.

Rose's best days on the PGA Tour appear behind him, but he's still a former FedExCup champion, finishing with the title in 2018, edging Tiger Woods and Bryson DeChambeau. Rose's highlight was a T4 at the RBC Canadian Open in June but he finished the regular season relatively strong. While the overall result of T54 at the Wyndham Championship isn't all that impressive, it came in large part due to an opening round of 73 before shooting sub-70 in the ensuing three rounds.

He's a true darkhorse at any point in the PGA Tour playoffs, but has been there before and succeeded.

The 2022 FedEx St. Jude Championship will be held from August 11-14 at TPC Southwind in Memphis, TN.

Tony Finau defeated Cameron Smith in a playoff to win last year when the event was held at Liberty National in New Jersey.

The purse at the 2022 FedEx St. Jude Championship is $15 million with the winner's share amounting to $2.7 million.