Lightning vs Avalanche Game 5 Picks and Predictions: Tampa Strikes Out

Colorado is on the verge of the Stanley Cup and has the defending champs looking frustrated and worn down. With Darcy Kuemper showing up between the pipes, find out why we like the Avalanche to bury the Lightning in Game 5's NHL betting picks. 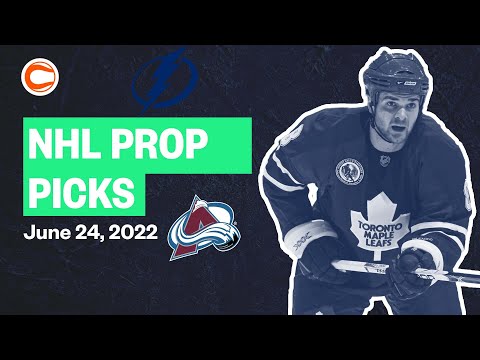 The Colorado Avalanche took Game 4 vs. the Tampa Bay Lightning thanks to a Nazem Kadri overtime winner, and now the Avs are one game away from lifting the most iconic trophy in all of sports at home on Friday night.

With the quick turnaround, can the Bolts regroup despite the injuries and a deflating Game 4 loss that left coach Jon Cooper with few words? Find out in our free NHL picks and predictions for Lightning vs. Avalanche on Friday, June 24.

The Avalanche opened Game 5 as -160 home favorites but were immediately bet up to -180 overnight. Colorado closed as -140 favorites in Games 1 and 2 at home. From Games 4 and 5, Colorado has moved 85 points. The total opened at 6 (-120 to the Under) and will likely move towards the Under.

Lightning vs Avalanche head-to-head record since 2016-17

The Avalanche are 59-13 SU in their last 72 games as a home favorite. Find more NHL betting trends for Lightning vs. Avalanche.

The Colorado Avalanche are on the brink of capturing the Stanley Cup and can do so at home Friday night, as they enter Game 5 with a 3-1 series lead as -180 favorites. The Game 4 overtime defeat might be a tough loss to bounce back from for the Lightning, who are losing a war of attrition and now have a quick turnaround to one of the toughest places to play — Ball Arena, which is also located 5,000 feet above sea level.

It’s these conditions why we’re seeing such an adjustment in pricing from the books. Colorado closed as +105 dogs in Game 4 but sits as a -180 fave in Game 5 making it an 85-point swing from venue to venue. Home ice is usually worth 40 points, so this adjustment is substantial — but warranted after Game 4.

Tampa defenseman Erik Cernak’s injury is playing a big part in the line movement. Cernak exited in the second period on Wednesday, and although he returned, he didn’t play another shift. The remaining five defenders had to log bigger minutes in the OT game and now have to travel to the thin air of Colorado. This situation is certainly worth a few points on the ML.

Brayden Point is also likely to miss another game and a Nazem Kadri-like return is looking doubtful for the center. Nikita Kucherov is not at 100% and these nagging injuries are more difficult to deal with just one day off and the altitude.

The 85 points are likely justified after hearing Jon Cooper’s words following the “controversial” loss,— we aren’t too sure the Bolts have enough in the tank to pull off the upset. Looking up at a 3-1 series deficit is daunting for a team that has logged more mileage than any other NHL team over the last three seasons.

The one weakness the Avs have is in net with Darcy Kuemper, but he rebounded after Game 3 and an early goal in Game 4, stopping 34 of the 35 shots he saw after giving up the early marker on Wednesday. His confidence should be restored and the Avs can now trust their goaltending situation in the elimination game.

The final advantage the home side has in Game 5 is on the power play. Colorado has scored a power-play goal in each of the four games and is 6-for-13 with the man advantage. In a game that the books will think will resemble Game 4 more than Game 1 (total at 6 leaning to the Under), a power-play goal on Friday would go a long way. Colorado’s speed is creating these penalties and with Tampa sucking wind, there should be plenty of power-play opportunities.

So in handicapping this total, can we expect seven goals? We doubt it. We could see the Avs get up early and possibly sit with a multi-goal lead, but they would likely be more inclined to defend than attack with the Cup on the line. The Tampa offense managed just 2.80 expected goals over the two games in Colorado and comes into Game 5 not as healthy and slightly dejected.

Even if the Lightning come out and get up early, Andrei Vasilevskiy showed on Wednesday he can keep this game tight too. Kuemper was the reason we liked the Overs, but after his performance Wednesday and regrouping of his confidence, he might not be the best goalie to fade.

Many like the idea that elimination games might see more goals with teams willing to pull their goalies down possibly three goals, but if Colorado is sitting with a very late lead and the Cup on the line, protecting the net will be priority No. 1.

This total could flirt with 5.5 but Under 6 at -120 might be the best price we see on this total.

Nathan MacKinnon saw his colleagues hoist some hardware on Tuesday and he came out on Wednesday in a critical Game 4 and fired eight shots on net. Through four Final games, Nate Mac has eight, six, three, and five shots on net.

He has 104 sots in 18 games in the playoffs while the next-closest player (Kucherov) has 69 shots in three more games. The Colorado All-Star has been held Under five shots just twice in his last eight games, and with so much on the line and him still not having a breakout game on the scoresheet, the mental master will certainly want to contribute in a possible Cup-winning game.

The one consistent thing in the series has been the number of shots the Avs have been able to get on net, and with the Bolts banged-up on the blueline, Nate Mac could dominate the SOG market.

Did you know that if you parlayed today’s NHL Lightning vs. Avalanche picks, you could win $53.72 on a $10 bet? 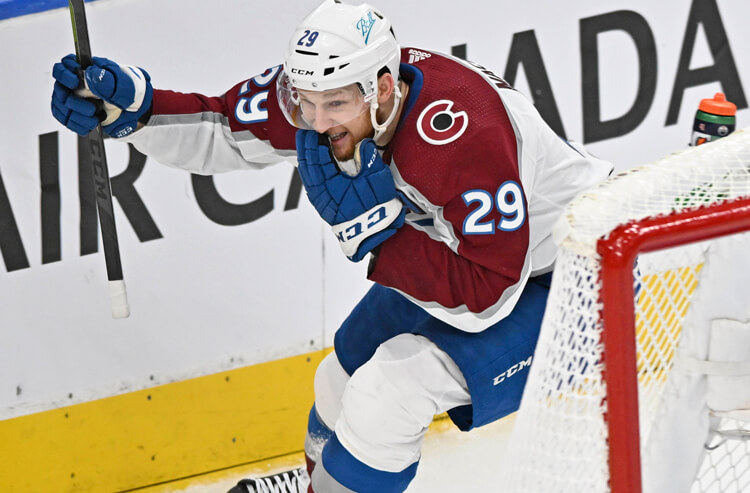 Lightning vs Avalanche Game 5 Picks and Predictions: Tampa Strikes Out
Provided by