Mitchell Marner is riding a 17-game point streak and is gunning for the Maple Leafs record of 18 tonight. Still, with the Over on 1.5 points set around +115 — and Marner not getting multiple tallies too often — we think a different market is a safer bet. 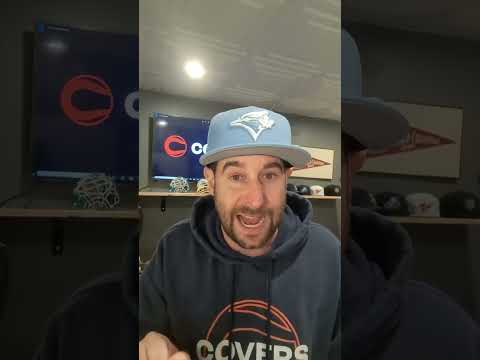 The Toronto Maple Leafs have been stacking wins despite key injuries to the blue line and have been getting elite production from Mitch Marner and goalie Matt Murray. They host a San Jose team that played in Montreal last night but are priced as heavy -280 favorites leaving the best value likely in the player prop market.

Luckily for bettors, one Toronto winger is approaching a very respectable team record that could affect his player prop production.

Find out in my free NHL picks and predictions for Sharks vs. Maple Leafs.

Mitch Marner has recorded a point in 17 straight games and is one point away from tying the team record of 18. Many will be looking to take advantage of this milestone by hitting his Over 1.5 points (+115) but considering he’s recorded a multi-point game just six times over the streak, the +115 isn’t good enough value, especially vs. one of the best penalty kills in hockey.

Instead, I’m hitting his Over 2.5 shots on goal that can be had at -115. Marner is coming off a season-high eight shots on goal two games ago and collected three SOG in his most recent game. His hit rate is close to 50% on this prop but playing on a line with Calle Jarnkrok and John Tavares, Marner is not being relied upon as a pure set-up guy and the winger has a goal in three straight games — all at even strength.

The record could force his linemates to feed Marner more than usual tonight and with him averaging over 20 minutes of ice time, including power play and penalty kill time, he will have plenty of opportunities to get the puck on net.

Mitch Marner: Points in 17 straight games which would be impressive if that was all he was doing.

San Jose sits in the Bottom 10 in Corsi and Fenwick percentage and allows over 30 shots per game. The Sharks are also on the back end of a back-to-back after playing in Montreal last night, and it's their 12th game in 21 days, which is a tough schedule to maintain decent play.

With his recent goal production and chasing a big milestone, Marner will continue to get pucks on net tonight and his SOG market might be returning better value than his Over 1.5 points market.

The Maple Leafs have proven many bettors wrong of late with a stretch of hockey that has seen them win four straight and take 16 of a possible 18 points in their last nine. The most impressive part of this stretch has been the team’s play with massive injuries to the blue line.

Morgan Rielly, TJ Brodie, Jordie Benn, and Jake Muzzin all remain out but the call-ups have played well in their absence. Even with another defenseman likely making his Leafs debut tonight in Conor Timmons, it’s tough to downgrade the Leafs here as they are playing their best team hockey of the season.

However, with the Sharks coming into town after playing in Montreal last night (a 4-0 win), bettors are forced to pay a heavy tax with the Leafs tonight. Early bettors ate up some of the value in the road team as they moved the line from -300 to -280 this morning, but that’s likely as much as this line is going to move toward the road team.

The Leafs closed as -220 road favorites in San Jose back in late October (a San Jose OT win) and with home ice worth roughly 25 points, that puts tonight’s line at -270. San Jose playing on the back-to-back is worth some points as well but that could be easily erased thanks to the injuries the Leafs are dealing with.

I see -280 as the longest the Leafs should be when considering the schedule, the previous moneyline price, and the Leafs’ injuries. If this ML gets to -270, there could be a buyback on Toronto.

The Sharks have been somewhat underestimated as they have some elite skills in penalty killing, but Matt Murray has been nearly impossible to beat since coming back from injury. Over his last six starts, he’s 5-0-1 with a 2.17 GAA and a .938 save percentage. He’ll face an offense that sits in the bottom half of the league in goals per game at 3.00 and has the league’s 23rd-ranked power play.

Update: Matt Murray has stopped 280 of the 299 shots he has faced in three preseason and seven regular season games for the Leafs.

San Jose is 6-5 on the road this year with a goal differential of zero. It's won just two of its last seven games, which also came against poor opponents in the Senators and Canadiens. With James Reimer on the shelf, Toronto could likely see No.3 goalie Aaron Dell, who has yet to play an NHL game this year and owns a 3.22 GAA and a .904 SV% in the AHL. Kaapo Kahkonen got the shutout last night in Montreal but he also played Sunday and goalies playing three games in four nights is very rare.

With the top-line production the Leafs have been getting as well as the play in net, taking Toronto with a heavy tax might not be a bad idea tonight, especially with early bettors making the line more appetizing.

The Leafs are 4-1 to the Under over their last five games and are 7-16-1 O/U on the season. They haven’t seen more than seven total goals in any game this year so bettors looking for easy Overs with this Toronto offense have been blanked on the year.

With the potential goalie matchup of Murray vs. Dell, this looks like a game I’d prefer to hit the Leafs’ team total instead of the Over 6.5. Murray has been one of the best goalies in the league over the last two weeks and is not a netminder I’m comfortable betting against. We’ve seen the Leafs switch to a very defensive game when playing with a lead, so getting both teams to score three goals tonight is likely not happening.

Dell hasn’t even performed well in the AHL this season with a GAA north of 3.00. He faces a Toronto team that has been getting elite production from its top two lines, making tonight a very tough spot for the backup goalie — especially with his team playing last night.

Add in a San Jose penalty kill that is the best in hockey and a power play that ranks in the Bottom 10, and special team goals might also be hard to come by.

I’m leaning on the Under here and so is sharp money as the total has moved 10 points to the Under since opening.

The Sharks are 1-4 SU in their last five games vs. Eastern Conference. Find more NHL betting trends for Sharks vs Maple Leafs.