Nashville is a +140 underdog to win the Stanley Cup versus the defending champion, Pittsburgh Penguins (-160).

The Nashville Predators are the big Cinderella story in sports after advancing to the Stanley Cup final as a No. 8 seed in the Western Conference.

The Predators, who were as big as 40/1 to win the Stanley Cup, upset the top-seeded Chicago Blackhawks with a series sweep in the opening round and rode that momentum through St. Louis and Anaheim to win the West.

Now, Nashville is a +140 underdog to win the Stanley Cup versus the defending champion, Pittsburgh Penguins (-160).

How does the Preds’ improbable run to the Cup final measure up against other Cinderellas on ice? Here's a look at all teams seeded sixth or lower in their respective conferences that reached the final, and how those teams fared once they got there:

The 2002-03 Mighty Ducks kicked off an improbable streak of three consecutive low-seeded teams representing the Western Conference in the NHL championship round. Despite finishing 16 points behind the conference-leading Dallas Stars, the Paul Kariya-led Ducks laid waste to their postseason opponents, rolling past the Detroit Red Wings, Stars and Minnesota Wild while losing just twice on the way to their first Stanley Cup finals appearance.

Anaheim quickly lost all of its momentum once the final started, dropping each of its first two games in New Jersey while failing to score in either of them. Anaheim responded with a pair of overtime victories at home, and the teams traded three-goal routs in the next two games to send the series to a Game 7. The Devils prevailed 3-0 to win the championship, but it was Mighty Ducks goalie Jean-Sebastien Giguere named the Conn Smythe Trophy winner after posting a 1.62 GAA in 21 playoff games.

No team more perfectly summarized the slogging, defense-first style of the early-2000s NHL than the Flames, who advanced to the Stanley Cup final despite having just one player record more than 50 points in the regular season (Jarome Iginla, 73). Miikka Kiprusoff was sensational that year, posting a 1.69 GAA while recording four of Calgary's 11 shutouts during the year. Still, Calgary finished just five points ahead of ninth-place Edmonton to sneak into the postseason.

The path to the final wasn't an easy one. Calgary needed seven games to knock off the Vancouver Canucks, then went six games apiece with the top-seeded Red Wings and second-ranked San Jose Sharks. But the Flames proved they belonged in the final with a convincing 4-1 win over Tampa Bay in Game 1. The teams alternated wins over the next five games, setting up a deciding Game 7 in St. Petersburg. The Lightning won that one 2-1 for their first Stanley Cup crown.

The first season after the year-long lockout featured plenty of surprises, most notably the Oilers coming out of nowhere to emerge as the Stanley Cup representatives out of the Western Conference. Edmonton reached the postseason by the slimmest of margins, finishing just three points ahead of the division-rival Canucks. In fact, Vancouver actually finished with more victories. The Oilers needed back-to-back wins at season's end to clinch a spot in the playoffs.

But none of that mattered once the second season started. The Oilers stunned top-seeded Detroit (which has shown up on this list a lot) in six games - the biggest upset in a Western Conference opening round that saw the top four teams go home early. A six-game triumph over San Jose and a five-game drubbing of Anaheim sent Edmonton to the final, where it rallied from a 3-1 series deficit to force Game 7 but ultimately fell short 3-1 against the Carolina Hurricanes in the deciding contest.

There was nothing spectacular about the Flyers' regular season performance. They finished a distant third in the Atlantic Division race - 15 points behind division-leading New Jersey and 13 points back of runner-up Pittsburgh. They didn't have a single player among the Top 48 leading scorers, with Mike Richards leading the way with a modest 62 points. But like the other teams on this list, Philadelphia caught fire at the right time.

The Flyers stunned second-seeded New Jersey in five games in the opening round, then caught a break when No. 6 Boston upended No. 3 Buffalo. Philadelphia needed seven games to dispatch the pesky Bruins, but rolled past the No. 7 Montreal Canadiens in five games to reach the final. Unfortunately, that's where the good times ended for the Flyers, who ran into a buzzsaw from Chicago and ultimately fell to the Blackhawks in six games.

As co-headliners of one of the unlikeliest Stanley Cup matchups in history, both the Devils and Kings reached the final despite being at the back end of their respective conference seeding. New Jersey needed seven games to defeat Florida before upending the Flyers in five games and the New York Rangers in six. The Kings had a much easier time of things despite being eighth in the West, cruising past Vancouver, St. Louis and Phoenix while losing just twice along the way.

The Kings wasted no time gaining the upper hand, stunning Devils fans with overtime wins in each of the first two games in New Jersey. Los Angeles took a stranglehold on the series with a 4-0 victory in Game 4 before New Jersey made it interesting, prevailing in Games 4 and 5. But Los Angeles was not to be denied, rolling to a 6-1 rout at home in Game 6 to become the first No. 8 seed to capture the Stanley Cup championship. 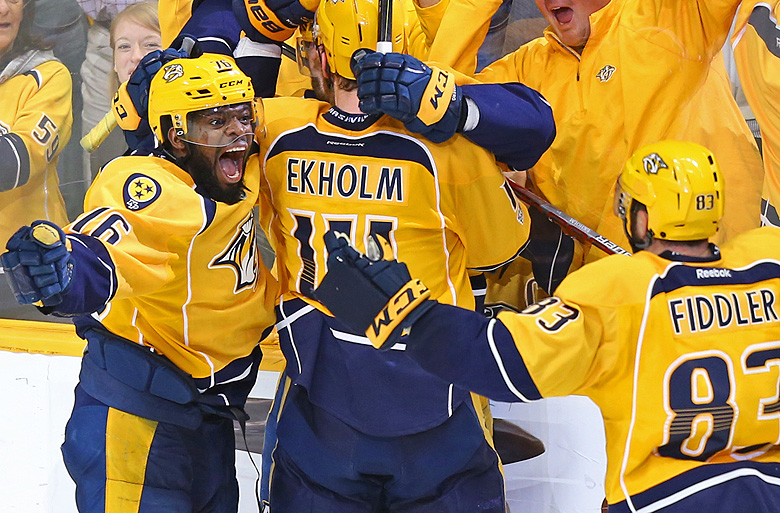