Panthers vs Capitals Game 6 Picks and Predictions: Going for the Kill

Florida's reversed its fortunes from early in the series and now finds itself on the verge of advancing, with the chance to put Washington away tonight in DC. The latest collapse from the Capitals should give the Panthers the edge, as our picks highlight.

The Florida Panthers have taken over the best-of-seven series lead with the Washington Capitals and can advance to the second round with a victory on Friday. The Capitals, who had a 2-1 lead before losing the last two, will try and even the series at home.

Panthers goaltender Sergei Bobrovsky has played much better the last two games and the scoring has picked up as well. Florida has already won a game on the road and is heavily favored to do so again.

Can Washington hold off the Panthers and force a Game 7, or will Florida move on to the second round?

Check out what we think with our free NHL picks and predictions for Panthers vs. Capitals on Friday, May 13.

The Over is 5-1 in the last six meetings between the Panthers and Caps in Washington. Find more NHL betting trends for Panthers vs. Capitals.

Losing the way the Capitals did in Game 5 could be soul-crushing. Washington was up three goals in the second period, then choked away the lead, and subsequently the game, 5-3.

It is the second time the Caps have blown a lead in this series and lost, but Wednesday’s defeat could be more than the Washington players can take mentally.

The goaltending and defense have been subpar for the Capitals. Ironically, Washington goalie Ilya Samsonov has better numbers than his counterpart, Florida’s Sergei Bobrovsky.

Bobrovsky, however, has picked up his play in the last two games. After the Capitals stung him for three goals in Game 5, he turned away 21 shots in a little more than 36 minutes.

Conversely, Samsonov allowed five unanswered goals on 13 shots. He shouldn’t get the blame for all of the goals. Patric Hornqvist scored on a breakaway for Florida’s second goal and Claude Giroux scored the team’s last goal on a 3-on-1.

In Florida’s three wins in this series, only one of those games was not won by two or more goals.

The Panthers have looked extremely dominant in the last two games. I think they’ll make it three in a row and move on to the second round.

Often in elimination games, the play is tighter and more physical. That leads to less scoring. The fact that the Under has hit in three of the previous five games only supports backing the Under.

The trends for the total seem to back that up. The Under is 4-1 for the Panthers in their last five against a team with a winning record. The Under is also 6-2 in the last eight when Florida is the favorite.

Bobrovsky will be crucial to the game staying Under. The Florida goalie allowed 12 goals in the first three games, but the Capitals have only scored five in the last two.

Both teams are allowing an average of 3.2 goals per game. Florida has to limit Washington’s power play to keep this low scoring, as the Capitals have a power-play conversion rate of 30%.

Washington’s starting goalie for Friday is up in the air. Vitek Vanecek played in the first two games, while Samsonov started the last three.

Carter Verhaeghe is not only the leading goal scorer for the Panthers in the playoffs but the leader in assists. The 26-year-old center has five goals and five assists through five games. He is second in the postseason in points with 10, just one behind Boston’s Brad Marchand.

So, it’s a bit puzzling why DraftKings would put out a line on Verhaeghe’s assists for Game 6 with the Over of 0.5 at +175.

Verhaeghe has had an assist in three of the five games. Playing on the first line helps pad his stats, but he is also on the second power play unit, thus giving him more chances for an assist.

Florida should come out firing on Friday. It wants to pin Washington down early. I believe Verhaeghe will be a big part of the offense in Game 6, just like he has been for the last five. 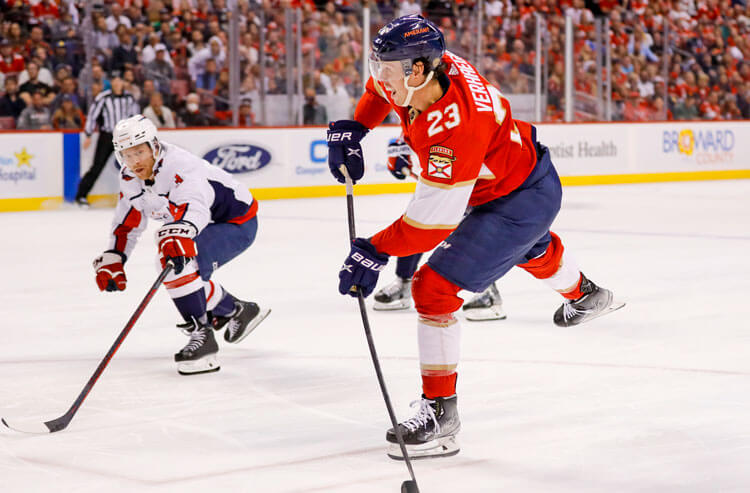 Panthers vs Capitals Game 6 Picks and Predictions: Going for the Kill
Provided by