In a gritty, low-scoring series, Calgary's been the better team and created more chances than Dallas. With a chance to advance tonight in Texas, our NHL betting picks are counting on the Flames to do the job and end the Stars' season.

The Calgary Flames can advance to the second round with a win tonight as they lead the Dallas Stars 3-2 in the series. They’ve taken back-to-back games and face an opponent that has scored two or fewer goals in four of the series’ five games.

Can the Flames continue to shut down the Stars offensively and pick up the series win as -160 road favorites? Can the Stars force a Game 7 and win another low-scoring affair? Find out in our free NHL picks and predictions for Flames vs. Stars.

Flames vs Stars head-to-head record in the series

The favorite is 8-3 SU in the last 11 meetings between the Flames and Stars. Find more NHL betting trends for Flames vs. Stars.

The Flames rallied in the third period Wednesday thanks to a pair of even-strength goals and an empty-netter. Calgary entered that final frame trailing 1-0 with the series tied 2-2 but Darryl Sutter's group found a way to beat Jake Oettinger and sent the home crowd into a frenzy en route to taking a 3-2 series lead.

The game played out like the majority of the other games in the series with both goalies keeping things tight early. Oettinger and Jacob Markstrom lead the playoffs in save percentage and goals against average as goals have been few and far between this series.

These tight battles have meant the Stars have been competitive despite scoring just eight goals in five games. Of those eight goals, four were at even strength, two were on the power play and two came via the empty-netter. Betting on the Stars means backing a team that has scored only once or been shut out in all three of its losses and is struggling to generate any offense.

Markstrom has allowed just six goals through five games and currently has a .952 SV%. The Flames are comfortable playing in tight games with Markstrom locked in and Calgary has dominated the Fenwick and Corsi battle in each of the series’ five games. Even in Dallas’ 2-0 win in Game 2, the Flames had a 60% Corsi and Fenwick percentage and generated more quality shots. Oettinger has been a stud but this Calgary offense has outplayed Dallas in every game so far and has 19.15 expected goals compared to the Stars’ 13 xGoals.

As seen on @timandfriends #Flames own a 3-2 series lead over the Stars thanks to their netminder Jacob Markstrom pic.twitter.com/2O3oZPUioc

We’re comfortable betting on the team generating the most quality chances. Dallas doesn’t have the offense right now to overcome a deficit while the Flames showed in Game 4 that they can win while trailing. Through five games, the Flames have generated 166 scoring chances to Dallas’ 115 and have produced 70 high-danger chances compared to 48 allowed.

Calgary finally got some scoring from outside their top line in Game 5 as Mikael Backland and Andrew Mangiapane scored the tying- and game-winning goals in the third period. That could be the difference again tonight as the Stars’ bottom-nine have been invisible as the top line of Hintz-Pavelski-Robertson has five of the team’s eight goals in the series.

The Flames split the two games in Dallas but were easily the better team in both games. Calgary entered Game 3 as -160 road favorites and despite dropping the game 4-2, outshot and created more chances than the Stars.

Oettinger will be tough to beat, but Markstrom has held the fort while the offense keeps pounding away. Calgary is averaging over 36 shots per game and has been winning against a goalie who has been elite. If Oettinger slips at all today, the Flames could be playing with an early lead, and with how bad the Dallas offense has been, we can’t see it overcoming even a small deficit.

Calgary tallied 95 total shots in the two games on the road this series, so Dallas hasn’t shown the ability to slow down the Flames even with the matchup advantage. It’s a heavy price to pay on the road, but Calgary is getting great goaltending, is creating a ton of chances, and has killed 18 of its 20 penalties to date. We’re trusting Sutter to get the boys through to the second round.

The Under is 4-1 so far in the series, with the one Over coming on an empty-net goal with one second left in the game. Through five games, we’re seeing an average of 3.6 total goals per game. The xGoals are certainly much higher (6.43 xGoals per game), but with the way Markstrom and Oettinger are seeing the puck — a combined 0.954 SV% — we aren’t expecting many goals tonight and neither are the books.

As of Friday morning, the best price for the Under 5.5 was -130. Many books are teetering on the precipice of 5 or 5.5 and if this total hits 5, it will certainly be a pass for us as Calgary has been generating too many good chances to hit the Under 5.

Markstrom has been named a finalist for the 2021-22 Vezina and it’s well deserved. He’s been the team’s MVP this series and has kept his team in each game, which is not an easy task with how good Oettinger has been across the ice. He’s facing an offense that is averaging a playoff-low 25.4 shots per game and has scored just four 5-on-5 goals through nearly 300 minutes of hockey.

Oettinger has been the second-busiest goalie in the playoffs behind Edmonton’s Mike Smith but has answered the call. The former first-rounder is the only reason the Stars are still in this series. He has a playoff-leading .956 SV%, which is unreal, and his 1.63 GAA vs. his 2.96 expected goals against indicates how elite he’s been playing. Through five games, the young goalie has 6.6 goals saved above expected.

Another reason the Under has been cashing in this series has been the play of the special teams. Only four power-play goals have been scored in this series as the two clubs are a combined 4-for-39 (10%). Calgary was one of the best penalty-killing teams during the regular season and has held the Stars to just 0.41 xGoals on the power play. We saw things calm down slightly in Game 5 as well, as there were only five total power plays after the series was averaging 8.5 total PP opportunities in the first four games.

Neither top line is flying and the secondary scoring has been sparse. Both goalies are stopping literally everything and the power plays have no rhythm. This is likely more of a lean than a play, but Under 5.5 is the play here but a total of 5 would keep us off the total.

With how low-scoring this series has been and both clubs so reliant on their top lines that aren’t producing, we’re not liking anything in the prop market. Instead, we’re going to back the team that’s dominated possession and scoring chances in this series.

We were happy to back the Stars as +185 road dogs in Game 5 but the offense has just been a huge letdown for Dallas backers. It’s like Oettinger needs to post a shutout for this team to win. Calgary is also still getting a lot of good looks and Oettinger can only play at this level for so long.

Calgary showed that it can overcome a late deficit as it did in Game 5 and Markstrom has been equally as good as his counterpart. The Flames showed in Games 3 and 4 that the last change wasn’t a huge issue as they still managed 95 total shots on net.

Sutter will have this team prepared and Dallas has needed to play perfectly just to be competitive. Give us the visitors to wrap things up tonight. 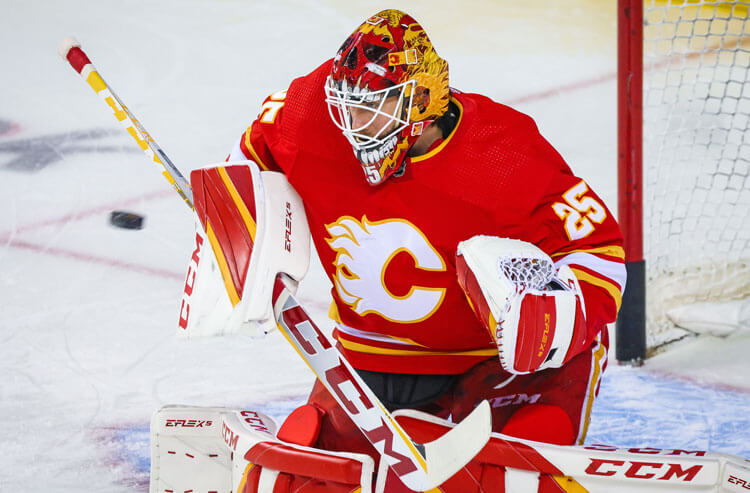 Flames vs Stars Game 6 Picks and Predictions: Calgary's Consistency Pays Off
Provided by