Maple Leafs vs Senators Picks and Predictions: The Battle of Ontario Renews in Ottawa

The Maple Leafs opened their season with a win and now head to Ottawa on a back-to-back to face the Senators in their home-opener. Find out if the Sens can take advantage of the tired Leafs and deliver their fans a win in our NHL betting picks.

The Toronto Maple Leafs picked up a defensive win last night in a 2-1 victory over the Montreal Canadiens, but the Buds won’t have any time to appreciate the win as they travel to the nation’s capital Wednesday to take on the Ottawa Senators in their season opener.

The Leafs won the season series 5-4 a year ago, outscoring Ottawa 36-31 over nine meetings that included seven one-goal games. Toronto opened at -165 on the ML and has moved down to -170. The NHL betting total sits at 6.5 leaning to the Under.

Here are our free picks and predictions for Maple Leafs vs Senators for Thursday, October 14.

The Under is 8-2-2 in Maple Leafs’ last 12 games following a win. Find more NHL betting trends for Maple Leafs vs. Senators.

The Leafs came out of the gates a little sloppy last night but goalie Jack Campbell weathered the early storm. He would finish with 1.5 goals saved above expected and stopped 31 of 32 shots. We likely won’t see Campbell on the back-to-back, meaning Petr Mrazek will get his first start in a Leafs uniform.

The former Hurricane only started 12 games last year but finished with a 2.06 GAA. He is one of the better backups in the league but mimicking Campbell’s performance will be a tall task. Very few goalies freeze pucks like Campbell, while Mrazek struggles with rebounds and finished last year with a -10.2 puck freezes above expected.

Ottawa goalie Matt Murray practiced on Wednesday but said he still doesn't feel 100 percent as he recovers from a non-COVID illness. Murray saw the Leafs four times last year and went 1-3 SU with a 3.72 GAA and a 0.880 save percentage. If Murray sits, backup Anton Forsberg will get the nod and the Swedish goalie didn’t fare well versus the Leafs, posting a 3.90 GAA in two games a season ago.

The Sens will also be without another major piece as Brady Tkachuk is still trying to get a contract done and won’t play. The pesky Tkachuk had eight points in nine meetings with Toronto and his absence on the top line is impactful.

The Leafs had to juggle some lines with Auston Matthews out last night. The 40-goal-scorer won’t play again Thursday, but Sheldon Keefe’s lines seemed to get more comfortable as the game progressed. Defensively, the Leafs won all the xG metrics, had more scoring chances, and looked terrific on the penalty kill, but traveling on the backend of a back-to-back is never an easy thing especially against a team that Toronto has struggled to blow out.

The Sens are filled with young talent seemingly at every position but this is still an inexperienced team that will likely feature a top line of Tim Stutzle, Josh Norris, and Drake Batherson. That’s just 211 combined NHL games worth of experience. Defensively, this is a team that allowed the fourth-most goals a season ago and the additions of Michael Del Zotto and Nick Holden don’t do much to improve the blueline.

This might be the only time when playing the day before might have an advantage, as the Leafs are up to speed and have had 60 minutes of game time to adjust to their new lines. Ottawa always seems to give the Leafs trouble and we will be hitting the OTT ML down the road, but we like the Leafs getting on the board early and taking another defensive approach. Not to look too much into preseason numbers, but Toronto outscored Ottawa 11-2 in three warm-up games while Forsberg gave up eight goals on 72 shots in his preseason matches.

Without Tkachuk and possibly no Murray, we’re taking the Leafs in regulation at -120. They closed at -125 on the three-way ML last night and we feel the B2B situational price isn't as warranted when the Sens have yet to play a game. Toronto will want to have a better start than last night and that could be the difference in this game.

The Over went 6-3 in the nine meetings last year and with the 6.5 total being hung on us for this Ontario battle, the public could be looking for more scoring tonight.

After the Leafs opened up yesterday’s game with some sloppy play on the backend and giving up a ton of quality chances in the first 10 minutes, Keefe settled down his team with Toronto winning the scoring-chance battle in the final 50 minutes. Look for the Leafs to come out with a better defensive performance right from the puck drop.

The Leafs finished yesterday with 2.37 expected goals against, which was made possible by an aggressive, on-the-puck penalty kill that was perfect including a near-two-minute 5-on-3. Campbell was big in net, but Mrazek is a former starter himself and earned a 19-save shutout in the preseason versus the Senators.

The Sens are not deep with offensive talent. They finished in the bottom-12 in goals per game last season and are very thin down the middle at center. Ottawa scored more than two goals in regulation in just two of its seven preseason games. Stutzle is a future 30-goal scorer and could hit that mark this year, but Ottawa is lacking secondary scoring.

If you must hit an Over, we’d advise the Leafs’ team total O3.5 (-120) as the Ottawa goaltending situation is an exploitable one. If the Leafs get up early, this 6.5 will be tough to hit. The Toronto offense is still getting adjusted to new lines and no Matthews means that the scoring talent has been split up with William Nylander having to play with Alex Kerfoot and Michael Bunting. 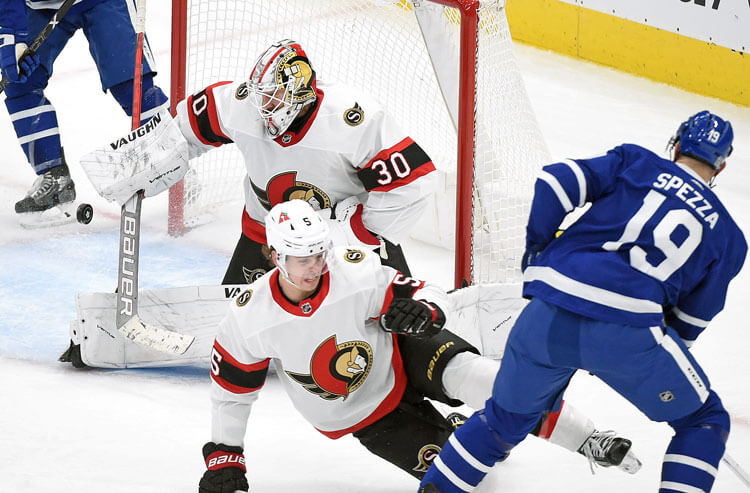 Maple Leafs vs Senators Picks and Predictions: The Battle of Ontario Renews in Ottawa
Provided by