Don't let Vegas' 1-0 win over the Capitals fool you, they're going to get lit up on the second half of a back-to-back. The Hurricanes boast an incredible power play and we expect Teuvo Teravainen's return will help hit the Over in our betting picks. 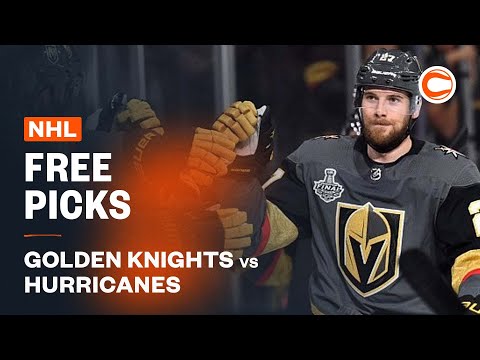 The Vegas Golden Knights are coming off a stingy 1-0 shutout win versus the Capitals last night, but can this traveling team steal two points from a rested Carolina Hurricanes team that is 13-5 straight up at home this season and come in as heavy -180 favorites?

Find out in our free NHL betting picks and predictions for Golden Knights vs. Hurricanes.

The Hurricanes opened at -160 on the moneyline Monday night but have started to move and sit at -180 as of Tuesday morning. The total is sitting at 6 and leaning to the Over. Washington closed at -140 last night versus the Knights while Carolina closed at -215 in their last home game versus a similarly rated Rangers team.

Canada: Hurricanes, Penguins, and Islanders all to win in regulation tonight boosted to +400 at BetVictor! Claim Now

The Over is 7-0-1 in Golden Knights’ last eight games after scoring two goals or fewer in their previous game. Find more NHL betting trends for Golden Knights vs. Hurricanes.

With the Golden Knights having played last night to a 1-0 win over a struggling Capitals team, Vegas is sitting as +160 road dogs heading into Tuesday's meeting in Raleigh. That’s roughly 20 to 25 points baked into the back-to-back situation and, to be honest, it might not be enough. This is a tough schedule spot for the Knights as they will face three of the best teams in the East (Carolina, Florida, and Tampa Bay) over the next five nights.

With the Golden Knights’ upcoming schedule, we’d be incredibly surprised if Peter DeBoer rode goalie Robin Leher again tonight. Instead, DeBoer will likely save him to play both games in Florida. If Lehner does sit, it gets interesting for Vegas as No. 1 backup Laurent Brossoit just drew back into the lineup last night after an upper-body injury kept him out of action since January 2. If he gets the start, it would be his first in three weeks. He’s allowed 19 goals over his last six starts and five in his last start.

Vegas has played three times in a back-to-back situation this season and is 2-1 SU, but both of those wins came in extra time and the Knights were as high as +130 underdogs. Facing the Hurricanes tonight could pose some different circumstances as Carolina is coming off an uncharacteristic 7-4 loss to the Devils but are 12-5 SU since December and have the second-best point percentage in hockey behind the Colorado Avalanche. Carolina is one of the most underrated teams in hockey and Rod Brind’Amour could be well on his way to winning a second consecutive Jack Adams award (+600 at bet365).

The 1-0 Vegas win might be a little misleading as well. The Capitals dominated from a metrics standpoint and finished with 3.45 expected goals to Vegas’ 1.68, per Money Puck. This is still a Vegas team missing Mark Stone, Pax Pacioretty, Reilly Smith, Alec Martinez, and Zach Whitecloud and will likely turn to a backup netminder who owns a .893 SV% over his last nine starts.

Vegas is also a team that gives up plenty of chances as it sits in the Bottom 7 in expected goals allowed at even strength and has given up the most high-danger chances. This Vegas blueline is something the Hurricanes can take advantage of as the bottom pairing of Ben Hutton and Dylan Coghlan is not a strong tandem and sees very little ice time compared to the top pairings.

Teuvo Teravainen missed Carolina’s loss to the Devils but practiced on Monday. He is on the better side of questionable for tonight, which should be a massive boost to this Carolina offense that is expected to score tonight. Teravainen sits fourth on the team in scoring and second in power-play points. His addition to the top line will make life difficult for the Knights who are still without their best defensive forward in Mark Stone.

Carolina is a Top-5 possession team in Corsi% and Fenwick% while also allowing the fourth-fewest even-strength goals. Frederik Andersen will likely get the nod for the Canes as the Dane is riding one hell of a heater. Freddy has won 10 of his last 11 starts dating back to December 7 and owns a 2.00 GAA over that stretch.

The Canes power-play unit has 12 goals over its last 10 games and will face a Vegas PK missing key pieces, sitting 20th in the league in success rate.

This price still has room to move and if Brossoit is confirmed, we could see a lot more action on the Canes.

It’s the Canes in regulation at -110 for us but we doubt we’d take this price at anything below -120.

Despite great goaltending and the strong 5-on-5 play, the Hurricanes have been playing great Over hockey and are 7-3 to the Over in their last 10 games. Andersen may own a 2.00 GAA over the last eight weeks but he’s 6-2 to the Over in his last eight starts. The Carolina offense has been doing most of the heavy lifting for these Overs as the Canes are scoring 4.56 goals per game since Christmas, which is the second-highest rate in hockey.

If this offense gets to face Brossoit — which the movement on the ML is indicating — the Canes could easily flirt with four or five goals. Don’t let the 1-0 win fool you, Vegas sits 19th in the league in goals allowed per game (2.95) and no goalie on this roster has a save percentage above .900 since December 1.

We also like the matchup the Carolina power play has over the Vegas penalty kill. The Knights have been below average at stopping opponents with the man advantage and rank 20th on the season in PK success — below Ottawa and Detroit. With Teravainen possibly drawing back in, it makes this strong Carolina power play even more formidable as it had scored five goals in the three previous games with Teravainen in the lineup.

With the Panthers and Lightning on deck for the Golden Knights, tonight’s meeting just looks like a let-down spot for the visitors. The 1-0 win versus Washington is likely scaring some off the home side, but the Knights were outplayed and likely lose that game seven times out of 10.

Nobody is talking about this Carolina offense, which is a crime because it’s putting up numbers similar to the Avalanche and Panthers of late. The power play is the best in the league right now and could get stronger with Teravainen's imminent return.

Brossoit has been a fadeable goalie of late and has given up at least four goals in three of his last six starts. Give us some goals from the home side Tuesday night.

Did you know that if you parlayed today’s NHL Golden Knights vs. Hurricanes picks, you could win $24.77 on a $10 bet?

Oilers vs Flames Game 2 Picks and Predictions: Underdog Oilers Rise Up in G2
Robert Criscola | May 19, 2022

Rangers vs Hurricanes Game 1 Picks and Predictions: New York Quiets the Storm
Jonny Lazarus | May 18, 2022
About Us
Contact Us
Careers
Our Team
Brand
Testimonials