The surprise Canadiens can take a 3-1 lead over the Golden Knights in Game 4 on Sunday night. Despite being up in the series and playing at home, the Habs are a +160 underdog. Can Vegas even things up? Find out with our Golden Knights vs. Canadiens picks.

To the surprise of many hockey fans, the Montreal Canadiens have taken a 2-1 series lead over the Vegas Golden Knights and have a chance to push the Stanley Cup favorites to the brink of elimination with another win on home ice Sunday night.

The Canadiens were thoroughly outplayed in Game 3 but managed to steal a 3-2 overtime win, despite Vegas outshooting them 30-8 over the game’s first two periods. Puck luck is real and Montreal was the benefactor of it on Friday night.

Here are our free NHL betting picks and predictions for Golden Knights vs. Canadiens on Sunday, June 20.

Vegas opened as -180 Game 4 chalk at TwinSpires, rose to -185 and returned to -180, where the moneyline stands at 4 p.m. ET. It's two-way action, with the Golden Knights getting 66 percent of bets and 53 percent of dollars. "We've seen the bigger wagers come in on Montreal," TwinSpires trading analyst Zachary Lucas said. The total moved from 5 to 5.5, though interest isn't overwhelmingly higher on the Over, at 55 percent of bets/58 percent of money.

The Canadiens are 9-1 SU in their last 10 games. Find more NHL betting trends for Golden Knights vs. Canadiens.

The Canadiens entered Game 2 at +750 to win their series versus the Golden Knights after the favorite easily won 4-1 in the opener. Montreal won Game 2 in the desert 3-2 after jumping out to a 3-0 lead and then followed that up with a lucky win on home ice Friday.

The Habs tied it up at two with under two minutes remaining after Vegas’ Marc-Andre Fleury gifted the Canadiens the equalizer. They carried that momentum into the extra frame when Josh Anderson, who scored the tying goal, would bury the winner nearly 13 minutes in. What Game 3 proved was no matter how dominant the Knights can be offensively, the Habs are never out of it as long as Carey Price is in net.

Since losing No. 1 center Chandler Stephenson following Game 1, the Knights have managed just four goals in over 130 minutes of hockey despite amassing 76 total shots and 72 scoring chances. Of the eight goals scored by the Knights in the series, six have come from defensemen, as the Habs have done a stellar job of shutting down the deep Vegas forward lines. The Golden Knights often relied on their four solid forward groups and speed to dominate 5-on-5 play during the regular season, but Montreal is surprisingly deep, just as fast, and has held the Knights to under 2.00 xgoals at 5-on-5 in two of the series’ three games.

Montreal opened Game 4 at +150 and quickly hit +160 shortly after. It’s hard to pass up this number for any home team during the regular season, let alone Game 4 of the playoff semifinals. The Habs have proven throughout this postseason that they can win any game even when they're outplayed. With Price in net and locked in, +160 is a no-brainer for us.

The Canadiens are undefeated in the 2021 playoffs when they score at least two goals.

That’s three games and three straight pushes on the total, as each game has finished with five total goals scored.

Friday’s game finished with 6.07 xgoals but it was the unexpected goals that were the ones that counted. Vegas’ opening goal was a gift from the Montreal defense while its second goal was a softy that Price stops 99 times out of 100. Yes, Cole Caulfield’s goal and Josh Anderson’s winner were solid tallies, but the truth is neither of these teams are doing well in the offensive zone as each club is built to stop goals.

We aren’t fans of hitting the Under on a flat 5, but we can’t talk ourselves into taking the Over in Game 4. Montreal will want to minimize mistakes and chances and keep things close and capitalize off of turnovers. The Knights, even when they do get their looks, don’t have a good answer for Price and have settled for a quantity game over quality when it comes to game-planning against the Montreal goaltender who owns a .934 save percentage through 14 games in these playoffs.

We haven’t seen both sides have success in the same game in any of the first three matches and we like that trend to continue on Sunday. Montreal just has to hang around and no team has done that better than the Canadiens in the playoffs. Their M/O is to keep things tight and take advantage when given the opportunities. The penalty situation calmed down from Game 1, giving us a little more confidence in the Under 5.

Did you know that if you parlayed today’s NHL Golden Knights vs. Canadiens picks, you could win $44.60 on a $10 bet? 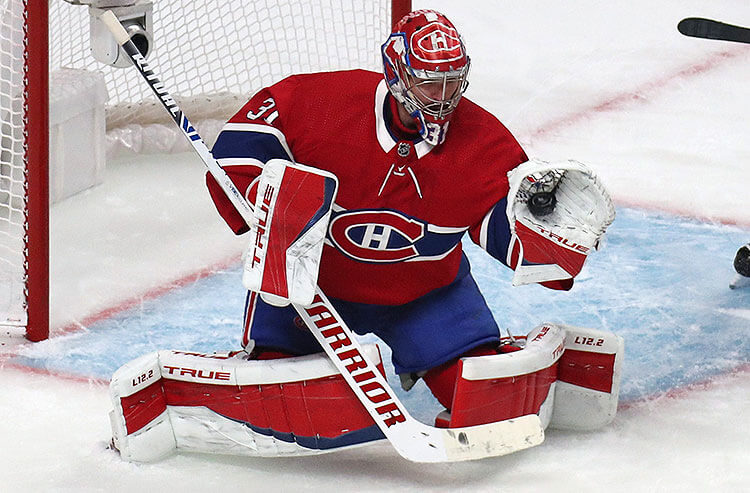