Despite being big underdogs, Montreal got off to fast starts and head home tied 1-1 in its semifinal series against Vegas. The Habs are big hockey betting home dogs again, so our NHL picks are sticking with the value on the Bleu, Blanc et Rouge.

The Montreal Canadiens evened their series with the Vegas Golden Knights Wednesday night in Nevada by a final score of 3-2. Now the Habs have home-ice advantage heading into Game 3 and may not have to face one of Vegas’ top centers in Chandler Stephenson, who was a late scratch for Game 2 and considered day-to-day for Friday.

The Habs raced out to a 3-0 lead on Wednesday and even though the heavily favored Knights drew within a goal of tying it late in the third period, Carey Price, Jeff Petry and the Canadiens held on for their eighth win in nine games.

The Canadiens opened as +150 NHL betting home favorites with the total opening at 5.5.

Here are our free picks and predictions for Vegas Golden Knights vs Montreal Canadiens for Friday, June 18.

The Canadiens are 7-0 in their last seven games playing on one day’s rest. Find more NHL betting trends for Golden Knights vs. Canadiens.

The Montreal Canadiens proved again on Wednesday that they get results when the books and the majority of bettors and fans alike count them out. Heading into Game 2, the Habs were +750 to win the third-round series as many in the industry were smitten by the Golden Knights’ series win over the Avalanche and Game 1 over Montreal in the semifinal.

Well, Montreal did exactly what they've been doing over its last eight games — play harder and faster than its opponent to start the game. Before the Knights could manage five shots on net, the Canadiens were already leading 2-0 and heading to the locker room.

Bigger than the loss itself for Vegas was the loss of key center Chandler Stephenson, who was scratched just before the game. He is considered very doubtful for Game 3 and was replaced by Keegan Kolesar, who had just 13 points in 44 games this season.

The potential loss of Stephenson marks the third straight series that the Canadiens have had a top-line center miss time. It will be interesting to see if Dominique Ducharme will employ the Danault-Gallagher-Lehkonen line against the new top line of Vegas, or switch over to guarding the Marchessault-Karlsson-Smith line. Either way, it’s not good for the Knights — who won’t have the benefit of the last change.

Carey Price was also, per usual, rock-solid in the Canadiens’ Game 2 win. Despite seeing just four shots on net in the first frame, Price stymied any chances the Knights could produce and didn’t let the massive crowd at T-Mobile Arena get back into the game.

The other major factor in the win was defenseman Jeff Petry suiting up after missing Game 1. The Canadiens are thin at the blueline and like to give their Top-4 rearguards heavy minutes. Petry’s addition added another dimension to the break-out game and his offensive IQ at the point is one of the most underrated in the league, as Petry finished second on the team in points during the regular season.

Montreal did a great job in front of Price, who finished with 0.24 goals saved above expected and only had to handle two high-danger shots all game. That was a testament to great adjustments by the Canadiens in stopping the Vegas defenders, who played a major factor in Game 1. Three Golden Knights D-men had goals in the opener and although Alex Pietrangelo had two on Wednesday, Montreal did a much better job at filling the lanes and keeping their wingers high to protect the point shot. In total, the Habs blocked 26 shots in the victory after just 15 in Game 1’s loss.

Montreal was able to dictate the pace of play by winning nearly 60 percent of the faceoffs in Game 2, led by Danault going 11 for 17 — with 13 of those draws coming in the defensive zone. Winning defensive draws is very important against the heavily used offensive defenseman of Vegas.

We were high on the Habs heading into the series and now with the injury to Stephenson, Price back on his game and the series heading back to Montreal, we’re riding the underdog moneyline again on Friday.

Through two games in this series, we have yet to see a total cash — either way. The total has closed at a flat five in both games and coincidentally has hit that number in each contest. Game 2’s push was a bit of a bad beat as the score was 3-1 heading into the third period but the fifth goal wasn’t scored until the 15-minute mark and the Habs failed to capitalize on the empty net.

The tight third period has us looking at things from a different angle. We know the Habs like to come out guns blazing in the first frame and it took Marc-Andre Fleury all he had in Game 1 to keep the first period total under two.

The plus money first-period Over hit before the 17-minute mark in Game 2 as the Habs owned the play and managed a ton of high-quality chances in the first. Vegas will want to try and match that energy in Game 3 or it could face a 2-1 series deficit.

First-period Overs during the regular season are heavy on the juice but with a flat 5 on Friday, we’re getting a great price of +120 for 1.5.

Another reason we’re hitting the first-period Over 1.5 and not the full game is the number of penalties called in Game 2 — especially against the Knights. Only two minor penalties were called on Wednesday with Vegas somehow taking zero infractions. If the refs are going to let things go, we don’t love the full game Over.

And even if the Knights do get the PP, Montreal has the playoffs’ best killing percentage.

Did you know that if you parlayed today’s NHL Golden Knights vs. Canadiens picks, you could win $42.80 on a $10 bet? 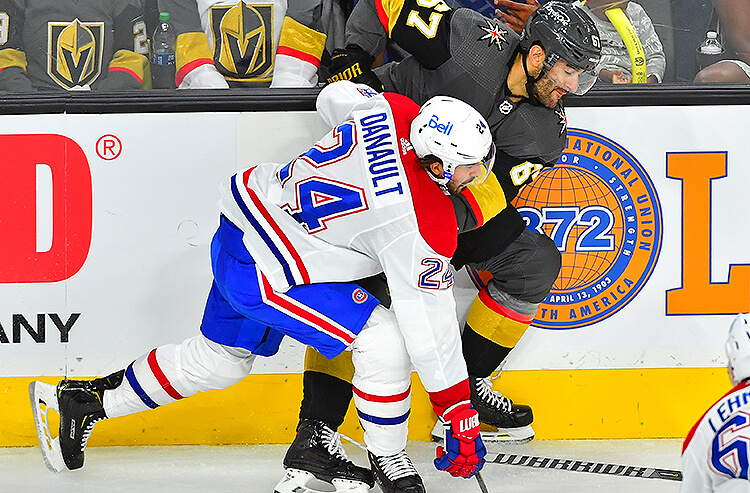