Beating the Golden Knights in Las Vegas is normally a tall task, but injuries have depleted the Knights' forward depth — and St. Louis has offensive depth to spare. Check out our NHL picks to see if that has us leaning with the road 'dogs tonight.

The latter half of a quiet, two-game night in the NHL is a Western Conference clash between the St. Louis Blues and the Vegas Golden Knights.

The Knights are coming off an ugly road and already tangoing with the injury bug, yet are still NHL betting favorites at home against the Blues, who have come out of the gates with some gusto, winning two high-scoring games on the road.

Here are our best free NHL picks and predictions for Blues vs. Golden Knights on Wednesday, October 20.

The Over is 5-1 in the last six head-to-head meetings in Las Vegas. Find more NHL betting trends for Blues vs. Golden Knights.

Normally, we'd be licking our chops at getting Vegas -125 at home — a place where it went 21-5-2 last season and 97-38-13 in its 4+ NHL seasons — but the Golden Knights are dealing with some major injuries already, which is challenging its offensive depth.

The Golden Knights are down top-line wingers Max Pacioretty and Mark Stone, who were also No. 1 and 2 on the team in points the last two seasons, as well as middle-six forwards Alex Tuch and Mattias Janmark. While Vegas still has a strong, play-driving line in Jonathan Marchessault, William Karlsson and Reilly Smith, without Pacioretty and Stone, Vegas is now turning to the likes of Nicolas Roy, Evgenii Dadonov, and Peyton Krebs to fill in on the wings alongside Chandler Stephenson.

That's a major dropoff in talent, which was evident in the Knights' last game — an ugly 6-2 loss to the Kings where LA dominated possession (65.91 Fenwick For Percentage) and nearly 60 percent of all faceoffs started in the Vegas end of the ice.

That lack of depth will also make it difficult to keep up with a Blues roster that is missing a top-six forward (Pavel Buchnevich, who is suspended for two games for headbutting) but has more than enough offensive depth to make up for it. Tonight marks the third straight road game to open St. Louis' season, but it won the first two games — against Colorado and Arizona — by scoring a combined 12 goals.

St. Louis has seven forwards with at least two points through its first two games and has six forwards driving possession (a FF% above 50 percent). By comparison, Vegas has four total skaters currently with a FF% better than 50 — the Marchessault/Karlsson/Smith line and then a depth defenseman.

Vegas' de facto top line will be able to compete tonight, but once these teams roll out the second lines, the advantage tilts in St. Louis' favor — and then Blues' third line has a significant opportunity to exploit Vegas, which is trotting out guys that ideally would be in the AHL right now.

It's a great time for St. Louis to roll into Sin City, as we love the matchup for the Blues and the value at plus-money is too good to pass up.

As mentioned above, the Blues have scored 12 goals through two games — 10 of which came at even-strength — by just coming in waves with three forward lines that all blend speed, skill, and physicality.

Even before injuries depleted Vegas' forward corps, this team was built on defense, anchored by Alex Pietrangelo, Shea Theodore, and goaltender Robin Lehner, but you can only defend so much before something has to give — and we expect the Blues to have the puck most of this game, so they're destined to score some goals.

St. Louis goaltender Jordan Binnington has also not been sharp to start, posting a 3.50 goals-against average and an .879 save percentage (with -1.8 goals saved above average) through two starts.

The Blues have cashed the Over in five straight games dating back to last year, it's a perfect 4-0 combined for these two teams early this season, and it's cashed in nine of the last 12 head-to-head meetings. 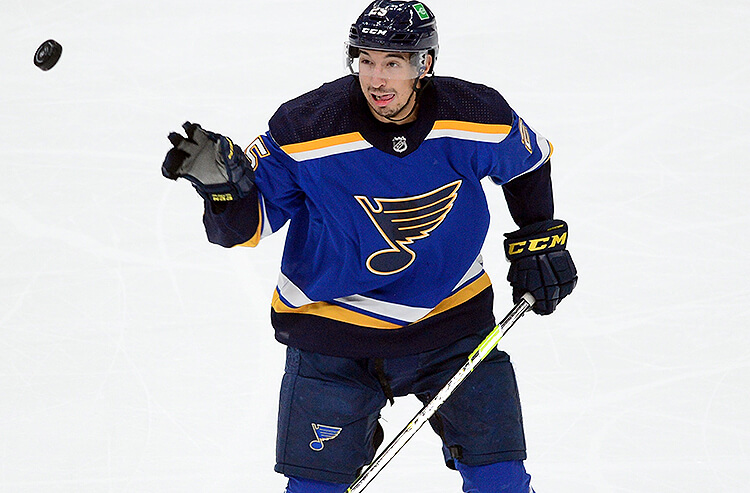