Colorado, last season's Presidents' Trophy winner, is favored to win the Cup. But it will start its season without star Nathan MacKinnon in Marc-Andre Fleury's Chicago debut. Find out why we're backing the road 'dogs in our Blackhawks vs. Avalanche picks.

The Colorado Avalanche finished with the best record in hockey a season ago and will open the 2021-22 season against the re-tooled Chicago Blackhawks, but they will be without star forward Nathan MacKinnon for tonight's matchup.

Colorado opened at -236 on the ML and has since fallen to -196 as a result of MacKinnon's absence. The total opened at 6 and has moved to 6.5 at many books.

Here are our free NHL betting picks and predictions for Blackhawks vs. Avalanche on Wednesday, October 13.

The Over is 7-1 in the Blackhawks’ last eight games overall. Find more NHL betting trends for Blackhawks vs. Avalanche.

The Avalanche enter the 2021-22 campaign as the betting favorite to win the Stanley Cup this season. They won the Presidents' Trophy last season and enter this year hungry after getting bounced in the second round of the playoffs for the third straight time. With all the hype surrounding them, they are massive betting favorites against the Blackhawks tonight but we aren’t sold on the Avs in the first week.

All-World center MacKinnon is out with COVID. Nate Mac finished third in the league in points per game and his absence is a massive blow to the Colorado offense and power play. He was third in the league in PP points and his skill set drives his line offensively. Without MacKinnon, the Avs’ top line will likely be centered by Nazem Kadri who will never be a top-four forward on any team.

Moving centers also creates a mess of the other four lines that had been developing over the preseason. MacKinnon’s absence has a very large ripple effect on this Colorado lineup.

Another missing piece for the home team Wednesday night is defenseman Devon Toews. Topdownhockey projects Toews to have the best EV expected goals against (xGA) on the blueline this season which isn’t a stretch as he sat fifth on the team in goals above expected (No. 1 defenseman), had a Fenwick one point lower than MacKinnon, and graded above 50 percent in expected goal percentage (xG%) and scoring chances percentage (SCF%). He isn’t as flashy as Norris candidate Cale Makar, but he is very important to this Colorado backend

Gone is last season’s starting goalie Philipp Grubauer, with Darcy Kuemper taking over. Grubauer finished with a better GAA (1.95) than Vezina winner Marc-Andre Fleury while Kuemper has been playing unimportant hockey on a small-market team in Arizona for the last four seasons. Kuemper has struggled to stay out of the infirmary over his career.

Is this more of a fade than an endorsement for Chicago? Not necessarily. The Blackhawks finished last season fifth in the Central division behind the Lightning, Hurricanes, Panthers, and Predators. They have a top-end scoring line, added Seth Jones to the blue line, have top prospect Kirby Dach healthy, and have the reigning Vezina winner between the pipes in Fleury.

This Chicago team can absolutely exceed the low expectations the industry has put on them and we saw in yesterday’s Penguins/Lightning game, that there may be a ton of value in big underdogs to begin the season. Chicago is a great team to be putting +175 on.

The Over went 2-0 on opening night including a game in Tampa that had no business hitting the Over. That’s the thing with NHL Overs: they’re never dead. Even the sloppiest opener between the Lightning and a short-handed Pittsburgh team finished 6-2 after having just two goals through the game’s first 50 minutes.

Both teams are starting a pair of goalies who have never suited up for their team in a regular season game and we’re sure both netminders are still getting used to their teams’ defensive systems as well as the idiosyncrasies and habits of their defensemen.

The loss of MacKinnon obviously hurts the Avs’ offense, but with head coach Jared Bednar having to play around with his lines to fill in the gaps, this could certainly affect the forwards’ defensive responsibilities trailing plays and in their own end. Missing their best defensive D-man in Toews also hurts the team defensively.

Both teams have incredible talent on the power play and if the NHL starts calling cross-checking this year like it says it will, both these potent PP units could get additional chances.

Colorado is deep up front, even without MacKinnon, while the bottom-six of Chicago is filled with young prospects. This total has hit 6.5 on some books so get that 6 now if you’re interested.

Did you know that if you parlayed today’s NHL Blackhawks vs. Avalanche picks, you could win $40.33 on a $10 bet? 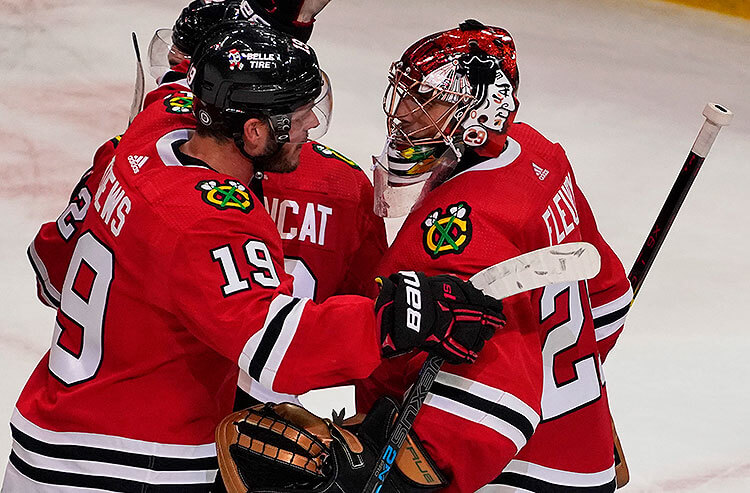 Blackhawks vs Avalanche Picks and Predictions: Chicago Surprises in Fleury's Debut
Provided by

Islanders vs Blackhawks Picks and Predictions: Islanders Look To Get Back On Track
Rohit Ponnaiya | Oct 19, 2021