After a huge road win for the Blues in Game 2, the series now swings to St. Louis. While we like the Avs to win, our NHL betting picks are expecting a downtick in goaltending as these two offenses begin to settle into the series — pointing us to the Over.

After a stunning Game 2 victory, the St. Louis Blues will try to keep their momentum going when they host the Colorado Avalanche in Game 3 of the Western Conference semifinals at Enterprise Center on Saturday night.

The Blues still find themselves in the underdog role despite stealing a game on the road on Thursday to tie the series. Do the bookmakers have it right with the Avalanche as solid favorites?

Find out in our free NHL picks and predictions for Avalanche vs Blues on Saturday, May 21.

The Avalanche opened as consensus -161 favorites, and they’ve been bet up at least 10 cents at the majority of sportsbooks. The total has held firm at 6.5 goals since Friday.

The Over is 22-8-2 in the Blues’ last 32 games a home underdog. Find more NHL betting trends for Avalanche vs. Blues.

Colorado has uncharacteristically scored just four goals through the first two games of this series. St. Louis goaltender Jordan Binnington has been standing on his head, stopping 81 of the 85 shots he’s seen so far. It seems like an unsustainable pace for a netminder that had a .901 save percentage in the regular season.

The Avs were fourth in the regular season in goals per game (3.8) and scored 11 goals in three head-to-head matchups with the Blues. Star defenseman Cale Makar is one of many Colorado skaters who have surprisingly failed to get it going in this series through two games. Despite taking nine shots on goal, Makar has yet to find the scoresheet and has played to a minus-2 rating. This seems due to change soon.

Meanwhile, the St. Louis offense has been incredibly top-heavy, with David Perron, Ryan O’Reilly, Vladimir Tarasenko, and Jordan Kyrou combining for 23 of their club’s 28 goals. That kind of one-dimensional attack is much easier to stop for netminder Darcy Kuemper (1.98 GAA, .923 SV% in five playoff starts) to stop.

The trends say take the Avalanche, as the road team is 5-2 in the last seven meetings between these clubs. The Avs are also 7-2 in their last nine meetings with the Blues, and 40-11 in their last 51 games after scoring two or fewer goals or in their previous tilt. St. Louis is 3-8 in its last 11 playoff games as an underdog.

Though we’ve seen only 10 goals through over six periods of play, the total is holding firm at 6.5 goals for this matchup. Several trends indicate that this series’ first Over is coming on Saturday.

The Over is 6-2 in the Avalanche’s last eight games following a home loss of three or more goals.

Both squads have run an effective power play all year long, with Colorado clicking at 24% in the regular season (seventh in the NHL), and the Blues firing at 27% (second). That success has carried over into the playoffs, with the Avs cashing in on eight of their first 21 power-play chances (38.1%), and St. Louis going 10-for-29 (34.5%), having scored in each of their first eight playoff games.

The Avalanche penalty kill is not off to a great start in these playoffs, surrendering five goals in only 16 chances (31.5%). St. Louis has surrendered five man-advantage goals, but in 29 opponent power plays (17.2%).

Both offenses have also generated plenty of shots on goal, with 79 coming in Game 1, and 63 in Game 2. Kuemper and Binnington can’t be expected to play brilliantly forever.

An Avalanche win and the Over will be hard to attain without some improved play from Colorado’s top forwards. Gabriel Landeskog has a goal and two assists through two games, but Nathan MacKinnon, Mikko Rantanen, and Nazem Kadri all have yet to find the back of the net against Binnington.

This trio – which tallied 96 goals in the regular season – is bound to start producing in this series. MacKinnon had five goals in four games against the Predators, so it’s not like he’s been a shrinking violet. Rantanen has no goals this postseason but has only taken 12 shots. He’s been dishing out the tallies instead, accumulating seven assists.

It’s been goals galore when these Central Division rivals have gotten together in the Gateway City, as they’ve gone 6-1-1 to the Over in their last eight meetings in St. Louis. 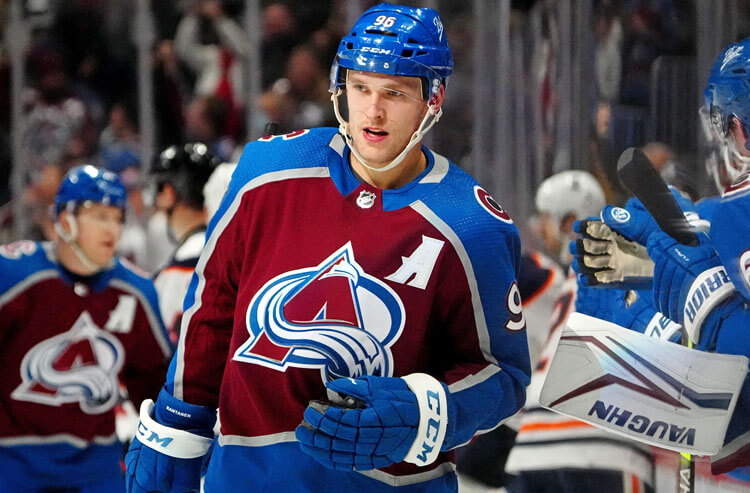