The final game on the NFL betting board for Week 1 is a matchup between the Tennessee Titans and Denver Broncos on Monday night, with kickoff just after 10:20 p.m. (hope you weren't thinking of going to bed early). **video

The Titans went 9-7 in 2019, sneaking into the playoffs where they upset the Patriots and Ravens and advanced to the AFC Championship. NFL odds have them as 2.5-point favorites against the Broncos, who are coming off a season where they went 7-9.

We break down the odds with our free NFL picks and predictions for the Titans vs. Broncos on September 14.

It's expected to be a warm and clear night at Empower Field at Mile High Stadium in Denver, Colorado. Temperatures should remain in the 70s, even overnight. Be sure to monitor the gametime conditions with our NFL weather info.

The Over is 10-3 in Titans last 13 games overall. Find more NFL betting trends for Titans vs. Broncos.

After starting the year off 2-4, the Titans went 7-3 to finish the season in head coach Mike Vrabel's second year at the helm. In the playoffs, they ran the ball down the throat of the Patriots and Ravens before coming up short against the eventual Super Bowl champion Kansas City Chiefs.

Despite losing right tackle Jack Conklin in free agency and trading defensive lineman Jurrell Casey to Denver, Tennessee has retained the core from that postseason run. Ryan Tannehill returns at quarterback while running back Derrick Henry should be ready to rumble again after leading the league with 1,540 rushing yards.

Denver has plenty of question marks in their front seven, and the season-ending injury to All-Pro linebacker Von Miller doesn't help. The Broncos won't be able to stop the Titans ground game and might be too inexperienced on the offensive side of the ball to make up the difference.

While the altitude at Mile High Stadium can be tough for visiting teams, the Titans do an effective job of controlling the ball with their running game and keeping opposing defenses on the field. Don't be surprised if it's the Broncos defense that gets worn down and tired in this contest, take the Titans to win and cover.

The Broncos offense was ugly in 2019 as they went through three starting quarterbacks. But once they decided to give first-round pick Drew Lock the keys to the offense in December, they finally showed some signs of life.

Sure, Lock struggled at times (like most rookie passers do), but he had a solid game against the Lions and a terrific performance against the Texans where he completed 81.5 percent of his passes for 309 yards and three touchdowns. He should be more consistent in his sophomore season, especially with the additions of running back Melvin Gordon and first-round wideout Jerry Jeudy.

As for the Titans, they also started last season off with an inept offense but turned things around once Tannehill became their signal caller. Tennessee averaged 32.7 points per game in their final nine regular season contests last year. With the Over/Under set at just 41, don't hesitate to back the Over.

Derrick Henry is the best player in this contest and after a monster year for the Titans in 2019, his rushing yards total will certainly be high. That said, we're confident that the 247-pound power back can truck Over it.

Henry piled up 377 yards in back-to-back playoff games against the Pats and Ravens, while averaging 102.7 rushing yards per game during the regular season. He was also a model of consistency, running for more than 85 yards in eight straight contests at one point. Expect a heavy dose of Henry on Monday and take the Over on his rushing yards total. 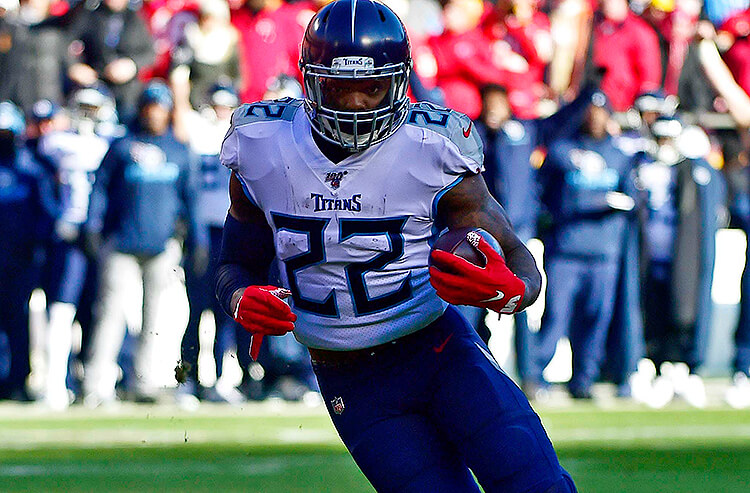