NFL betting isn’t always about wagering on the best team, but rather the best line. I told that to someone on Twitter recently, and they called me a jerkoff.

Name-calling aside, it doesn’t matter how good your NFL betting strategy is or what advanced system you have helping you pick winners: if you don’t get the best spread or total for your opinion, you’re not giving yourself a fighting chance.

Each week I’ll give my “Bet Now/Bet Later” tips on NFL betting, pinpointing sides and totals and the optimal time to bet them.

NFL Week 1 is always a tricky slate since these odds hit the board back in May and have been taking action all summer. But with the bulk of bets coming in the 48 hours before kickoff, there’s still room for movement and value.

This spread opened Steelers -3 in the spring and moved to -5 heading into the week before kickoff. While that 2-point move is nothing to scoff at, five is a dead number (games aren’t often decided by five points) and books will quickly push this point spread to -6 if Steeler money shows.

And it will show. Pittsburgh is one of the most public teams in the NFL, with a loyal fanbase that loves to gamble (it’s crazy how many bookies hail from the Steel City). According to our Covers Consensus, 74 percent of tickets are written on the Steelers and some books have already made that jump to Pittsburgh -6, so shop around. There are some -5 and -5.5 lines still up as of Monday 1 p.m. ET.

Ben Roethlisberger is back under center, stirring the Black and Yellow backers. And for what it’s worth, the Giants suck in home openers, going 3-10-1 ATS in those games since 2006.

But from the reaction of Chicago faithful and football know-it-alls around the world, the Bears naming Trubisky as their Week 1 starter over Nick Foles is the worst thing to happen to Windy City sports since Steve Bartman.

That popular sentiment is picking up steam heading into Week 1 and I expect the anti-Mitch money to come in on the Lions and move this spread to Bears +3.5 before Sunday’s start. Currently, Chicago is +3 and costs a tad more after a move from +2.5 last week. Wait this out.

Detroit has plenty of fans entering the 2020 season, picking the Lions as a dark horse to win the NFC North with Matt Stafford back under center. Stafford has to survive Week 1 and this Chicago pass rush, which is going to be back at the 2018 level when it killed QBs to the tune of 50 sacks on the season. I'm hopeful the spread adds that half-point hook but it could even be worth the extra juice to buy Chicago +3.5 if you don't see it by Sunday.

This Over/Under hit the board at 45 points back in May and is still climbing, with books dealing 47 and some popping up to 47.5 points heading into game week.

Arizona’s offense started to find its footing in the second half of 2019, scoring 25 points or more in five of its last eight games (5-3 O/U). Second-year QB Kyler Murray is in Year 2 under Kliff Kingsbury and was gifted the best pair of hands in the NFL when the Cardinals dealt for WR DeAndre Hopkins.

San Francisco knows how to light up the scoreboard as well, averaging 29.9 points per game last season – second-most in the NFL. The Niners do have plenty of receivers dinged up but their status for Week 1 looks promising, which is more than San Francisco can say for the defense right now. Key stoppers such as Dee Ford, Nick Bosa and K'Waun Williams are missing practice time.

If you like the Over in this NFC West war, bet it now. As we mentioned, money on the Over is pushing this total up to 47.5 and if those big-name 49ers defenders are officially ruled out for Week 1, the public will react to that news with even more opinions on the Over.

The Chiefs and Texans get the opening game spotlight and Dallas and L.A. showdown Sunday night, but the marquee matchup of Week 1 is the new-look Bucs taking on the Saints. This game is going to be hyped like a Chris Nolan movie, including the trademark “HRRRRMMMMM!” sound.

Tom Brady and Rob Gronkowski join an already-dangerous Tampa Bay passing game that will finally get to shine without Jameis Winston coughing the ball up every third series. Throw some Drew Brees-to-Michael Thomas into the mix, and the late money on the Over will show for this 4:25 p.m. ET start.

If you like the Under (and the early play did, moving this total from 49.5 to 49), then play it cooler than Brady holding practices during COVID quarantine. According to Covers Consensus, 74 percent of bets are on the Over as of Monday and some books are still dealing 49.5, knowing the Over action is coming.

Where can I get the best odds on the NFL? 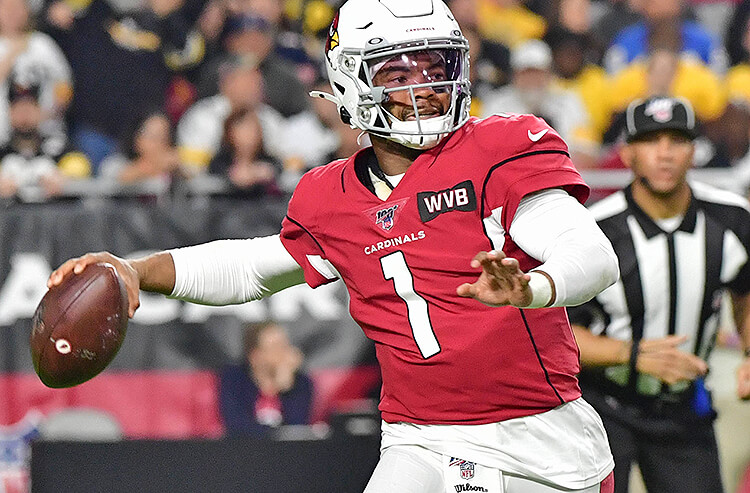