The Los Angeles Chargers start “LAR” – life after Rivers – against the Cincinnati Bengals in Week 1 of the 2020 NFL season.

The Bolts’ long-time quarterback is out (signing with the Colts), leaving Los Angeles to lean on Tyrod Taylor under center – at least in this season opener. Their opponents, the Bengals, also usher in a new era of football in Cincinnati with star rookie QB Joe Burrow at the helm of the offense. Cincy is a 3-point NFL betting underdog at home in Week 1.

Here are our NFL free picks and predictions for Chargers vs. Bengals on September 13. **video

Temperatures in the low-80s with a 30 percent chance of showers at kickoff, and winds blowing West at 6 mph. Be sure to monitor the gametime conditions with our NFL weather info.

The Chargers are 10-4-2 ATS in their last 16 road games. Find more NFL betting trends for Chargers vs. Bengals.

This spread originally hit the board back in May with the Chargers as 5-point road chalk. Books loved this dead number, because it gave them risk-free wiggle room and allowed the early money to dictate the spread. And it did, quickly moving to L.A. -3.

Cincinnati made a splash in the draft and during free agency, with plenty of new faces in the program. But with limited practices and zero preseason reps, the Bengals could be learning on the job. Burrow is an elite talent that has the chops to excel in the pro game, but will be facing a Chargers pass rush that is turning up the intensity in 2020.

And while Taylor is also a new starter, he was with the team in 2019 and is familiar with his skill players. The Chargers could hit the turf running in Week 1, using plenty of play-action, rollouts, and misdirection to exploit a Cincy defense that – while improved – allowed 4.7 yards per rush in 2019.

The Chargers put all their chips on RB Austin Ekeler, letting 2019 leading rusher Melvin Gordon dart to Denver in free agency, so expect L.A. to double down on that decision and run the ball much more than their 36.71 percent run rate last year. That means shorter gains keeping the clock ticking.

Defensively, L.A. is going to miss SS Derwin James like the deserts miss the rain, but Joey Bosa and Melvin Ingram are still there causing havoc on the edges and will be licking their chops with a first-year passer staring back at them.

The Bengals aren’t going to throw the kitchen sink at the Bolts and will be very careful with their precious No. 1 draft pick, so expect RB Joe Mixon to earn his shiny new $48-million extension with a butt load of touches on Sunday. Run, run run. Tick, tick, tick. Under, Under, Under.

You could see something from the Chargers in Week 1 that you haven’t seen in a very, very long time: a QB sneak.

With Rivers at the wheel, the QB sneak was all but torn out of the playbook with Los Angeles opting for the QB keeper at about the same rate we witness a solar eclipse. But, with Taylor under center, that call is back in the mix and should definitely help a red-zone offense that scored touchdowns on less than 53 percent of its trips inside the 20-yard line.

Taylor is no Lamar Jackson, but compared to Rivers’ mobility, the former Hokie looks like Usain Bolt with RedBull strapped to his feet. He’s scored 16 rushing touchdowns during his pro career, with 14 of those coming in his time as the Bills starter between 2015 and 2017. Eleven of those TDs were runs inside the red zone. 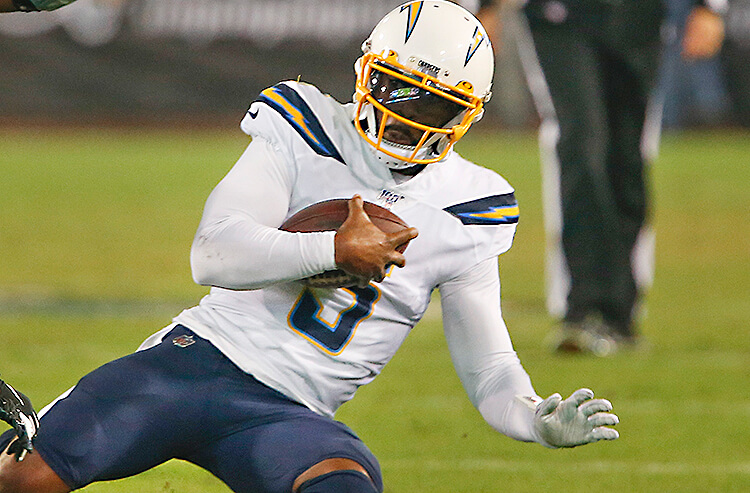 Chargers vs Bengals Week 1 picks and predictions
Provided by