“There’s probably more bets on the Raiders in California than in the state of Nevada.” -- Jay Kornegay, vice president of race and sports Westgate Las Vegas Superbook

Patrick Everson
Last Updated: Mar 28, 2017 7:04 AM ET
Photo By - USA Today Images
For the longest time, the NFL has carried an antiquated public stance on sports betting. Yet at league meetings Monday morning in Phoenix, team owners voted 31-1 in favor of the Raiders moving from Oakland to Las Vegas. The team’s first season here is expected to be in 2020.

That move to the sports betting mecca begs the question: Will the NFL seek any limitations of the legal, state-regulated wagering that takes place on the most popular professional sports league in the United States?

Sportsbook operators in Las Vegas and around the state certainly hope the answer to that is a resounding “no.” Late Monday afternoon, two key voices not only agreed with that sentiment, but wholeheartedly expect that NFL wagering will not be affected when the Silver and Black take the field at a brand-new stadium in three years.

“I don’t see why it wouldn’t be business as usual,” Nevada Gaming Control Board Chairman A.G. Burnett told Covers. “The geographic location of a team is actually irrelevant these days. Las Vegas, Reno, Hawaii, England, we regulate it the same. For any game, anywhere, the same protections are in place.”

Clark County Commission Chairman Steve Sisolak, a driving local political force behind the effort to land the Raiders, fully believes that wagers on the Raiders and all NFL teams will go off in 2020 as surely as they will when play resumes this fall.

“Yes, absolutely. I’d be very surprised if it were anything different, nor do I expect it to be anything different for hockey,” Sisolak said, alluding to the NHL expansion franchise Vegas Golden Knights beginning play this fall at T-Mobile Arena.

Still, based on state statute, the possibility exists for NFL Commissioner Roger Goodell to petition the state and seek a limitation on betting. That could include requesting that there be no bets allowed on Raiders home games, or perhaps any Raiders game – up to and including the Super Bowl, should the team make it that far. The portion of the regulation the NFL could put into play reads:

“Any event, regardless of where it is held, involving a professional team whose home field, a court, or base is in Nevada, or any event played in Nevada involving a professional team, if, not later than 30 days before an event or the beginning of a series of events, the team’s governing body files with the commission a written request that wagers on the event or series of events be prohibited, and the commission approves the request.”

It would seem like a preposterous ask by the NFL – and the state could deny the request – but again, this is a league that won’t publicly acknowledge what has inarguably made its product so immensely popular: the pointspread and the ability to wager on it. So sportsbooks are cautiously optimistic about what the Raiders’ move to Vegas means for their industry.

Jay Kornegay, who is in charge of the Las Vegas Superbook as vice president of race and sports for the Westgate Las Vegas, has seen what he believes is a softening in the NFL’s stance.

“When these discussions took place in the past about Las Vegas hosting a pro franchise, the gambling subject was always on the forefront,” Kornegay said. “With this whole climate change the last couple of years, that hasn’t been discussed at the same level, which is very surprising for us. Remember, just two years ago, the NFL prevented Tony Romo from having a fantasy football event here in Vegas.

Indeed, Nevada’s state-regulated system is seen as the gold standard for legal sports wagering. Goodell has long contended that betting harms the integrity of sports, but many experts in gaming, the legal community and government have rightly pointed out that well-regulated sports betting actually protects the integrity of the games – far more than the unregulated betting which annually accounts for the overwhelming majority of wagers in this country.

“There’s probably more bets on the Raiders in California than in the state of Nevada,” Kornegay said.

Considering that California is the most populous state in the country, and that estimates of illegal sports betting in the U.S. range between $150 billion and $400 billion annually – Nevada’s legal handle in 2016 was $4.5 billion – Kornegay’s statement is likely spot-on.

Florida attorney Daniel Wallach, an expert in sports gaming legalese, found the approval of the Raiders’ move to the gambling capital of the world interesting, in light of what’s still playing out in New Jersey. The Garden State has been pushing to legalize sports betting for several years and is hoping its appeal in a current case will be taken up by the U.S. Supreme Court.

In that case, the NFL and other major sports leagues are arguing against New Jersey’s effort, with all the typical integrity-of-the-game statements and more. That would present a real problem for Goodell and Co. if the Raiders were immediately on the move.

“If the NFL was playing in Las Vegas in 2017, the league would be walking into a hornets’ nest by giving New Jersey all the ammunition it needs to point out the hypocrisy,” Wallach said. “I’d predict the NFL would want the Raiders’ games off the board.”

However, by 2020, the Jersey case will be in the rearview mirror, and other precedents could be set as well.

“I think the league will have fewer questions and might even be on board with state-regulated sports betting,” Wallach said. “The 2017 questions will largely be answered by then. We’re two to three years away from dramatic change in legal sports betting, whether it’s due to court decision or federal legislation coming on line. The controversy will largely be settled.”

Wallach stands with the sportsbook operators on the preferred outcome when the Raiders roll out their 2020 squad.

“I think the NFL should allow wagering to take place in Las Vegas on any game,” he said. “If they’re comfortable enough to enter a jurisdiction defined by the gaming business, then they should be comfortable enough with the regulatory apparatus in place to not be fearful of wagering on these contests. The NFL should let the robust regulatory system perform its role. It would be inconsistent to embrace Las Vegas and not embrace legalized, regulated sports betting.”

If there’s any discomfort at this point, the NFL hasn’t brought it to Burnett’s attention, though he said the Gaming Control Board would welcome any discussion from the NFL or other sports leagues. Burnett pointed out the state has a strong history of working with many sports organizations, specifically noting the relationship with the International Olympic Committee.

The state’s regulatory structure, he said, boils down to three main components: a before, during and after, if you will – that have worked quite well. That system creates a relationship with the sportsbooks that provides open communication lines to root out any betting inconsistencies in a hurry.

“The sportsbook’s license is on the line. They will communicate with us if something looks odd or shifty. They’re on the phone with us right away,” Burnett said, noting similar communication exists between the GCB and sports leagues, again using the IOC as an example. “We have a relationship to share information and data before, during and after the Olympics take place. We can work with them in real time and take an item off the betting board. That doesn’t necessarily exist in the unregulated market.”

The American Gaming Association released a statement from president and CEO Geoff Freeman, who applauded the decision to place an NFL team in Las Vegas, while echoing Burnett’s points: “The gaming industry currently partners with professional teams around the country and we look forward to soon doing the same in Nevada.”

Nevada has a tremendously rigorous and sound process to assure that games are on the up-and-up and that bettors and fans aren’t being taken for a ride either. Sportsbook operators understand the importance of all of that, and point to the fact that the process has been roundly successful. Now, they hope the NFL understands it as well.

“With the Raiders’ move to Las Vegas, I'm hoping nothing changes as far as public wagering in the state,” said Tony Miller, sportsbook director of the Golden Nugget in downtown Las Vegas. “We currently take wagers on UNLV and (Nevada-Reno) sports, and soon the new NHL franchise. It's a new era in Las Vegas, and the sportsbooks are well-governed by the state. I see absolutely no problem in taking wagers on all sports from all the millions of new guests traveling to Las Vegas.”

William Hill US, which operates more than 100 shops across Nevada, released a statement from CEO Joe Asher praising Monday’s vote while utilizing one of the top catchphrases of the past couple of months.

“This is further evidence that the myth that legalized sports betting somehow hurts the game is nothing more than fake news,” Archer said.

Sisolak noted there’s still plenty of work to do in order to get this process to the finish line – formalizing the stadium lease and the development agreement, performing traffic studies to determine infrastructure needs and more. But as far as plunking down bets on the Las Vegas Raiders, he believes that’s a done deal.

“I think the NFL has already had their fears allayed,” Sisolak said. “Otherwise, they wouldn’t have agreed to come here.” 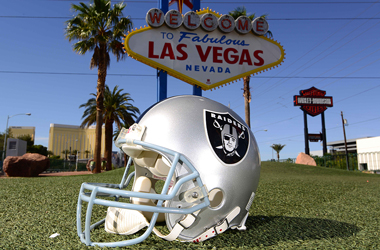