NFL 2021-22 Season Fallout: Where the League is Heading

From draft trends to home-field advantage, Shawn Wronka analyzes the last season of NFL football and how teams might approach roster construction and on-field play this fall.

The 2021 NFL season was one for the books, and although it may be tempting to leave it in the dust, there are lessons to be learned from each NFL season that can give us hints of what is to come.

Rams’ general manager Les Snead donned a shirt to the Rams’ Super Bowl parade with “F*** Them Picks.” It was a take on the popular “F*** Them Kids” Michael Jordan meme. Snead was poking fun at his well-documented free-natured willingness to deal first-round picks, having traded away eight first-round picks since the 2016 draft.

In that draft, Snead parlayed the Rams’ first that year with their first in the following year to move up to first overall to select Jared Goff. In the 2018 offseason, Snead used another first to acquire Brandin Cooks, and in the 2019 draft, Snead opted to move out of the first round after seeing how the board landed.

That’s not to take away from what Snead accomplished. General managers should not succumb to the sunk cost fallacy if the Stafford trade demonstrated anything. Too often, GMs lose their jobs by not convincingly pivoting off previous mistakes (e.g., Ryan Pace with Mitchell Trubisky), and Snead deserves his flowers.

If anything, what makes the Rams’ journey even more impressive is how they failed to use the rest of their high-end draft capital even remotely well. Here is a look at how the Rams have spent Day 2 picks (Rounds 2-3) instead of them not participating in the first round since 2017:

The obvious exception here is Super Bowl MVP Cooper Kupp. Still, there are easy arguments that the rest of these picks either had no bearing on the Rams’ Super Bowl win or were just outright awful or nonsensical picks.

In 2020 the Rams spent their first draft pick taking a running back in the second round (Cam Akers) one year after taking one in the third round (Darrell Henderson). Neither led the team in rushing this year, and both outrushed Malcolm Brown by just 200 yards the year prior. In last year’s draft, their first trip to the podium was to select a wide receiver that weighed 155 pounds: Tutu Atwell. This season Atwell had 141 all-purpose yards and played just ten offensive snaps.

Nevertheless, the fallout of this is that we may see teams leveraging their future recklessly to replicate the Rams’ success story. But, teams will conveniently overlook the facts of the Rams’ path:

Maybe “rental” isn’t the right word. Still, before the last two Super Bowls, you’d be hard-pressed to find other examples of how the Rams and Buccaneers succeeded with Matthew Stafford and Tom Brady. The only other comparable example in modern history is Peyton Manning with the Broncos. Still, they didn’t bring home the Lombardi Trophy until Manning’s fourth and final year with the team and after a coaching change during the offseason prior.

Regardless, these recent successes may signify the times to come. And some big names are already moving and talk of Kyler Murray, Deshaun Watson, and others potentially being on the move this offseason. It looks as though teams will try to replicate that approach in 2022.

This potential shift in roster construction may get lost in translation because this only worked for the Bucs and Rams. After all, quarterback upgrades were arguably the only thing those teams needed. They had top-tier coaching infrastructure and on-field talent that had already displayed potential flashes before either quarterback joined those respective teams.

Bruce Arians, Byron Leftwich, and Todd Bowles brought Tampa Bay a 7-9 finish in their first year despite a 30-interception season from Jameis Winston the season before Tom Brady joined. Sean McVay had already previously led the Rams to the Super Bowl in 2018, and it was clear that Goff had a very limiting ceiling in the following seasons.

And quite frankly, teams that have made big quarterback moves this offseason may not have had the required infrastructure to replicate that success.

The Denver Broncos, winners of the Russell Wilson sweepstakes, have first-time head coach Nathaniel Hackett at the helm, whose previous stops before Green Bay were as the offensive coordinator of the EJ Manuel-led Bills and the Blake Bortles-led Jaguars.

Deshaun Watson landed with the Cleveland Browns. The Browns have tied their success to an unclear suspension situation and a first-time head coach in his third year with some arguably outdated offensive philosophies (heavy run-game and 12 personnel usage, etc.).

The Washington Commanders - who are sorely devoid of receiving talent outside of Terry McLaurin, saw massive defensive regression last year, and are amidst a congressional investigation - decided their big splash move would be to outbid themselves for Carson Wentz. Speaking of Wentz, the Colts decided to spruce up their flat and one-dimensional offense by making the massive jump from Carson Wentz (43:22 TD: INT ratio since 2020) to Matt Ryan (46:23).

What lies ahead is a possible epidemic of teams misdiagnosing their ceiling and missing out on the opportunity to develop a homegrown, Super Bowl-winning quarterback of their own.

Home-field advantage isn’t dead, but not what it was

If the 2020 and 2021 seasons have taught us anything, the presence of crowds is nowhere near as big of a factor as we believed just a few short years ago. If we use a one-to-one comparison between the last two seasons, the average home spread was -1.3 last year compared to -1.8 this year. The implication is that the presence of crowds is worth about half of a point. In terms of actual performance, home teams won by an average margin of 1.9 points, coincidentally the exact number we suggested before the season.

If you regularly watched football this year, you'll recall hearing the words "two-high safety shell" far more frequently than before. So what is it, and why is it seemingly everywhere these days?

Well, a defensive "shell" describes the formation the defensive secondary lines up from before the snap, whereas the "coverage" is the actual formation itself and assignments after the snap. Much like how it sounds, a two-high safety shell constitutes how the defense lines up with two safeties high and outside of the box before the snap.

So why are we hearing about it so much these days?

Single-high shells were the league-wide norm until reliably vertical offenses began to abuse their predictability. In a single-high safety shell, it's harder for defenders to start in the box pre-snap than to drop into a deep zone afterward because it often requires that defender to flip his hips to run downhill.

Therefore, the defense is less likely to run two-high coverages from single-high shells, which makes the offense's job of identifying and exploiting post-snap coverages much easier.

With just one man typically helping over the top, quarterbacks like Brady, Aaron Rodgers, Patrick Mahomes, and Josh Allen could repeatedly put that defender in conflict and exploit defenses for huge gains down the field.

In a two-high safety shell, a player can start from outside the box pre-snap and work his way up into the post-snap box while remaining square to the quarterback.

As a result, it's easier to disguise and execute more coverages from a two-high shell than from a single-high. In conjunction with this shift, teams have ramped up the usage of two-high coverages to provide more help over the top.

Teams effectively shut down the deep ball by disguising coverages and frequently providing help over the top. The Chiefs faced two-high coverages twice as much as last year, which is why Mahomes and the Bills' Allen, despite their pedigree, experienced prolonged struggles last season.

So how did they answer? Two-high coverages stretching the defense more vertically leave fewer defenders in the short and intermediate areas, especially between the numbers. Short passes could reliably rack up a lot of yards after the catch (YAC), or running backs had lighter boxes to run against. When Buffalo leaned extremely hard on two-high coverages against the Chiefs in the divisional round of the playoffs, Mahomes had already seen an entire season of two-high coverages. As a result, he knew what to do: Not attempt a single pass that traveled over 16 air yards, and the Chiefs went on to score 42 points.

Patrick Mahomes faced two-high safety shells on 92% of plays, the 2nd-highest rate of his career. As a result, Mahomes did not attempt a deep pass for the first full game in his career.

Where does the league go from here?

Suppose defenses continue to insist on leaning so heavily on two-high safety coverages. In that case, teams will begin attacking the softer short and intermediary areas more. We've seen this tactic in action from players like Cooper Kupp, Deebo Samuel, and Davante Adams. Those pass-catching thoroughbreds excel at finding pre-catch open spaces and racking up YAC stats. In context, 11 of 13 teams made the playoffs with wide receivers that led the league in yards after the catch.

We may also see a reversion towards more running volume, particularly with faster one-cut backs who can consistently break through the lighter boxes and generate chunk yard gains. The 49ers have followed this blueprint for years now, and they were one miraculously dropped interception from making the Super Bowl. In the end, it's a fun thought exercise to guess what the discourse and outcomes would have been this offseason had the Rams not hoisted the Lombardi Trophy.

Maybe Kyle Shanahan finally gets redemption for the 28-3 meltdown in Super Bowl 51, possibly instilling hope in franchises with quarterbacks of Jimmy Garoppolo's caliber. If the Bengals win, it challenges the unquestioned truth that you need a good offensive line to win the whole thing, or it fuels the recent trend of pairing quarterbacks with their college-wide receivers. We could see teams like the Patriots take John Metchie III, or the Bears take Chris Olave or Garrett Wilson in the upcoming draft.

But the world will never know, and that's the beauty of the NFL. We can only stand by and watch things unfold and try our best to understand and appreciate what we see. With the 2021 season behind us, we can only try our best to guess how 2022 will top it. 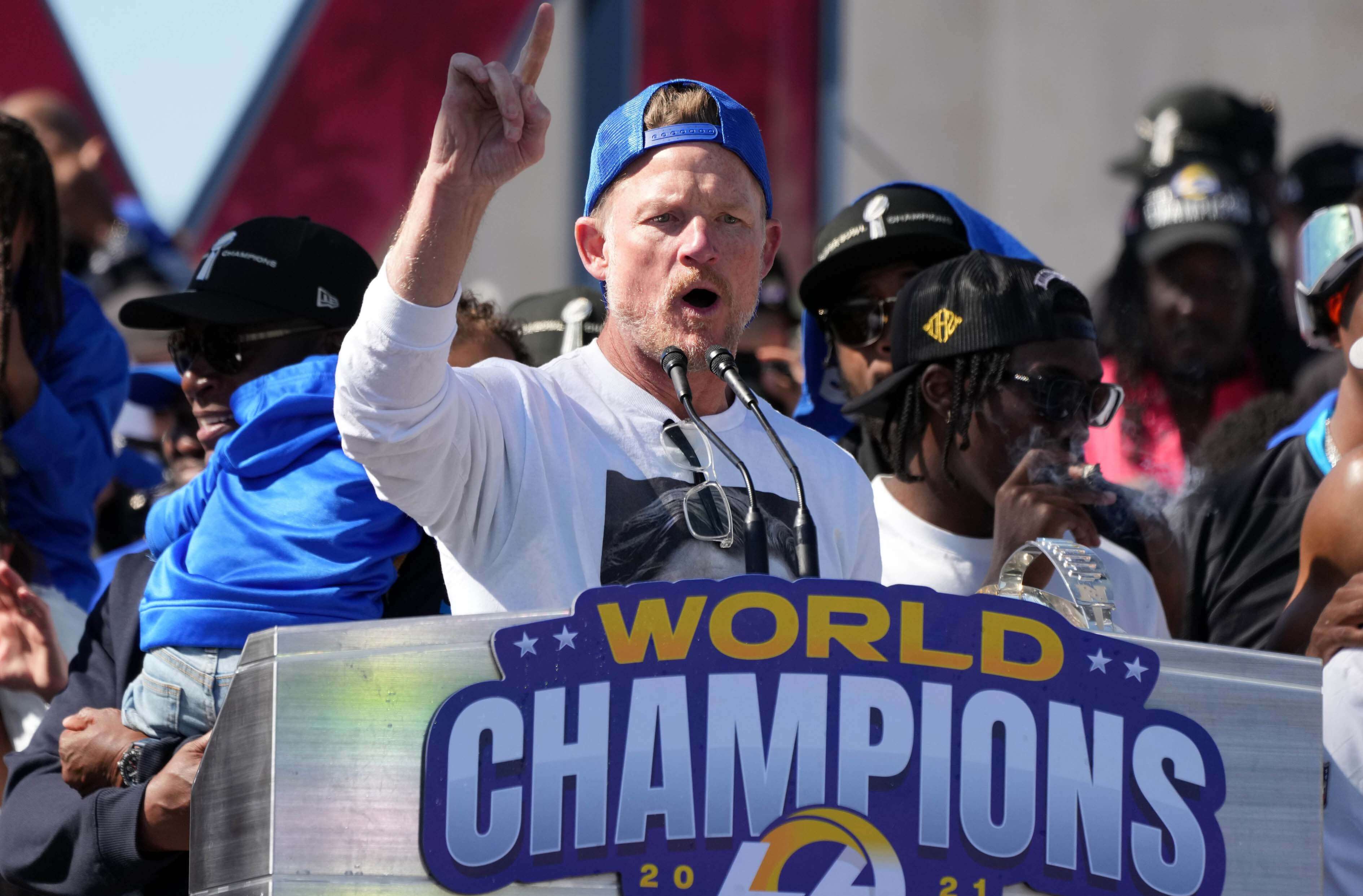 NFL 2021-22 Season Fallout: Where the League is Heading
Provided by