Despite a handful of losses in the second half of the season, UCLA's offense has rarely skipped a beat and should have no problem piling up the points vs. the Cal Golden Bears in Week 13. We break it all down in our UCLA vs. Cal betting picks below.

There’s Black Friday football in the Pac-12 as the UCLA Bruins (8-3) travel to Berkeley to face the California Golden Bears (4-7).

It’s been a down year for Justin Wilcox, as his team is already eliminated from bowl contention and therefore has little to play for in this regular-season finale.

The Bruins had high hopes after a strong start to the year but had their hearts ripped out of their chests in last week’s 48-45 loss to rival USC. How will they respond in Week 13?

Read our college football picks and predictions for UCLA vs. California below to find out.

UCLA vs California picks and predictions

Remember when Chip Kelly and the Bruins started 6-0? It was all sunshine and rainbows in Pasadena until the midway point of the season, but things haven’t gone so swimmingly since, losing three of its last five and back-to-back games heading into this regular-season finale.

What’s gone wrong? A makeshift defense thrown together in the transfer portal simply hasn’t been up to par, ranking 98th in EPA (expected points added, garbage time excluded) per play and 121st in success rate.

That’s dampened what could’ve been a terrific season spearheaded by a powerful offense averaging 40.0 points per game. Dorian Thompson-Robinson’s fifth season as the starting quarterback has naturally been his best, as he’s completed 69.8% of his passes for 8.2 yards per attempt while amassing 3,237 total yards and 33 total touchdowns.

Running back Zach Charbonnet has been among the nation’s best rushers, racking up 1,539 total yards and 13 total touchdowns on an outstanding 7.5 yards per attempt.

UCLA’s offense has been terrific overall, ranking fourth in EPA per play and third in success rate. Despite having a reputation for being a tough defense, Cal has been a turnstile on that side of the ball in 2022. California ranks 76th in EPA per play and a ghastly 125th in success rate, so the Bruins should be able to keep the chains moving with relative ease in this matchup.

I’m targeting UCLA’s team total with the best bet, which is listed at 35.5 at DraftKings. That number is 4.5 points below its season-long average despite this being a favorable matchup against a Bottom-6 defense in the country in success rate.

The juice is currently set at only -110, which is too good of a price to pass up. Cal has faced two good offenses this season, giving up 42 points to Oregon and 41 points to USC. It shouldn’t be surprising if the Bruins get to a similar number in Week 13.

After opening at UCLA -9, the line has moved to at least -10 across all locations at the time of this writing, with both teams an identical 6-5 against the spread this season.

UCLA has been somewhat binary under Chip Kelly in that they take care of business against bad teams while struggling against elite opposition. A year ago, the Bruins had an 8-4 record while going undefeated against losing teams and posting an 0-4 mark against teams that made a bowl.

The splits haven’t been quite as stark in 2022, although back-to-back losses will certainly raise eyebrows considering one of those losses came to Arizona. Still, going back to last season, the Bruins are 11-1 ATS against a team with a losing record.

On the other side of things, Cal has typically been a good team to back at home. The Golden Bears are 7-2 ATS in their last nine home games including last week’s cover and straight-up win against rival Stanford.

Cal isn’t particularly good at anything this season, ranking an identical 76th in EPA per play on both sides of the ball. Despite the success against the spread at home, this simply isn’t a good football team and I’d gravitate toward UCLA unless the line moves to -13.

Both teams have been profitable to the Over this season, as UCLA is 8-3 andCal is 6-5. The total for this matchup is set at 60.5 at most locations.

Given UCLA’s propensity to score points and Cal’s futility on defense, we can anticipate a solid day for the Bruins offensively. Chip Kelly has been around long enough that he doesn’t always get the respect that he deserves for consistently churning out productive offenses. He specializes in finding weaknesses to attack, and there are plenty of holes in this Cal defense.

The primary area of concern for Cal is a soft defensive front that ranks 107th in line yards, 97th in stuff rate, and 123rd in HAVOC produced by the front seven. It’s no mystery why the Golden Bears rank a measly 117th in rushing success rate.

That’s quite a problem going against a UCLA team that ranks first in line yards, sixth in success rate, and 11th in HAVOC. The Bruins rank second in EPA per rush and second in rushing success rate, so expect yet another productive day from Charbonnet and Thompson-Robinson on the ground.

When Cal has the ball, they’ll primarily look to create chunk plays. The Golden Bears rank just 112th in success rate but are 14th in explosiveness, struggling to move the chains but relying on big gains to offset the inefficiency.

Cal has two plus receivers in Jeremiah Hunter (812 receiving yards, three TDs) and J. Michael Sturdivant (685 receiving yards, six TDs), so getting the ball to their playmakers against this porous Bruins defense is a priority.

Points should be expected from both sides, making the Over an intriguing look.

The Over is 10-3 in the Bruins’ last 13 conference games. Find more NCAA betting trends for UCLA vs. California. 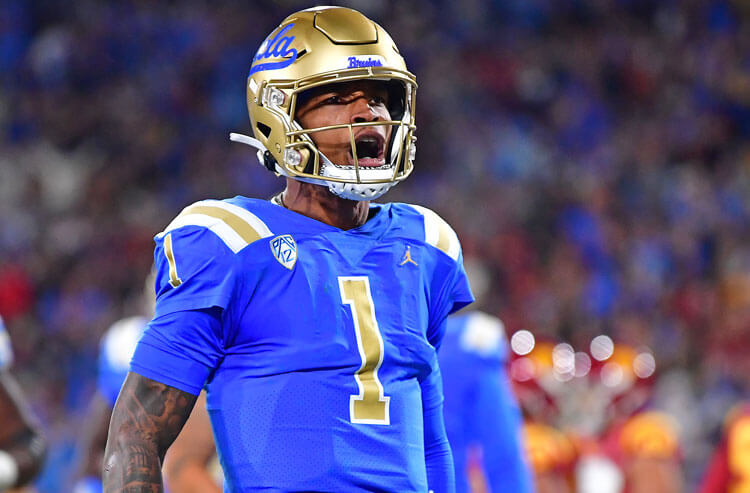