UCF got the better of Tulane earlier this season, and may not be in as rough shape without its QB as the books seem to think. See why our college football picks still have faith in the underdogs in this AAC Championship game.

Both the No. 22 UCF Knights and No. 18 Tulane Green Wave survived scares last weekend to reach the AAC Championship Game.

Tulane will now play in the school’s first AAC Championship tilt, while UCF is 2-0 in two conference championship appearances, both high-scoring thrillers in 2017 and 2018.

The Knights beat Tulane earlier this year on the road, but the Green Wave head into Saturday’s matchup favored by 3.5 points. Below, we offer our best free college football picks and predictions for UCF vs. Tulane in the 2022 AAC Championship Game.

UCF vs Tulane picks and predictions

On a quest for a fourth consecutive AAC title game appearance, Cincinnati fell 27-24 at home against Tulane, who scored the go-ahead touchdown on a 30-yard pass from Michael Pratt to Duece Watts with 5:10 remaining in regulation.

The touchdown was Pratt’s only score of the evening, and he finished with 162 yards on 13-of-22 passing.

Running back Tyjae Spears was the star of the show, with 181 yards on 35 carries and a rushing touchdown in both the second and third quarters.

Tulane won the time of possession battle 33:59 to 26:01 but was just 4 of 13 on third down and failed on its lone fourth-down conversion attempt.

The Green Wave rank 81st in college football in third-down conversion rate (37.14%), but their opponent on Saturday is ninth in that statistic (49.04%).

When these teams played each other back in November, Tulane let UCF go 10 of 18 on third down while the Green Wave were 6 of 12. Tulane also had trouble stopping the run against the Knights’ top-ranked rushing unit in the AAC, allowing four rushing scores and 336 yards on the ground with a 6.2 yards-per-attempt average.

The Knights may not see the same production this time around if quarterback John Rhys Plumlee is out for the game.

The senior ran for 176 yards and a pair of touchdowns on 18 carries against UCF last time, but he left last Saturday’s win over South Florida with a pulled hamstring. Backup Mikey Keene came off the bench in the second half and was solid in the passing game, going 15-of-19 for 129 yards and two passing scores, including a game-winning touchdown to Alec Holler with 20 seconds left in the fourth.

Keene started 10 games last season, including a 14-10 win over Tulane in which Spears was held to 77 yards rushing and Pratt threw for 147 yards, while Keene passed for 229 yards and two scores.

UCF has won the last five against Tulane as well as 10 of 12 in the series. Even with Plumlee potentially missing from the lineup or at less than 100%, the Knights have the Green Wave’s number and already proved they can beat them once this season.

Look for UCF to put up a fight and keep this game close until the final minutes in the Knights’ final AAC matchup before they head to the Big 12 next year.

A) Troy Trojans, UCF Knights, and Fresno State Bulldogs all to win BOOSTED to +700 at Caesars! Bet Now

The spread opened at 2.5 but has moved to as much as four points in Tulane’s favor. The Green Wave are tied with Oregon State for the best ATS record in college football at 10-2, but the two games they failed to cover were at home.

In the last 10 in this series, these teams have gone 5-5 ATS, but Tulane holds the advantage in the last three, covering twice.

Tulane is also 9-1 ATS in its last 10 conference games and 7-1 ATS versus teams with a winning record, while the Knights are 2-5 ATS in the last seven meetings between these two, but the underdog is 4-0 ATS in the last four of this series.

Tulane’s only losses this season came by three points in a 27-24 defeat at home to Southern Miss in late September and the seven-point loss to then-No. 22 UCF Nov. 12.

UCF dropped its third game of the season in a 17-14 upset by Navy two weeks ago, with the Knights’ other two losses coming in a 20-14 defeat at home against Louisville and a 34-13 decision at East Carolina, who finished the season sixth in the AAC.

To hang with Tulane again on the road, the Knights need to contain Spears in the run game and get more production from their own rushing attack. If Plumlee’s not at full strength, they’ll need a stellar performance from Keene through the air against a Tulane pass defense that ranks first in the AAC (182.2 yards surrendered).

Keene has shown he can handle the pressure, though. Last week was the second time this season he’s come off the sidelines to guide UCF to victory with a late game-winning touchdown and went 7-3 as a starter last year.

The game plan for UCF could change drastically without Plumlee, which would force the Knights to move the chains through the air behind Keene.

Tulane, on the other hand, had a more balanced offensive attack against UCF the last time they met, with Pratt passing for 236 yards and three touchdowns and Spears rushing for 130 yards on eight carries.

The 10 head-to-head matchups in this series have produced a wide range of scores, from an 85-point output in Orlando in 2020 to a 19-point total in New Orleans in 2006, the first of two wins for Tulane in the series.

The Over is 5-5 in the last 10 in this series and 2-1 in the last three. Tulane has scored at least 24 points in each of its last nine games, and UCF has scored 25 or more in all nine of its victories this season.

The only times the Knights have been held under that point total were in their three losses to Louisville, East Carolina, and Navy, in which they produced 14, 13, and 14 points.

The underdog is 4-0 ATS in the last four meetings between these teams. Find more NCAA betting trends for UCF vs. Tulane. 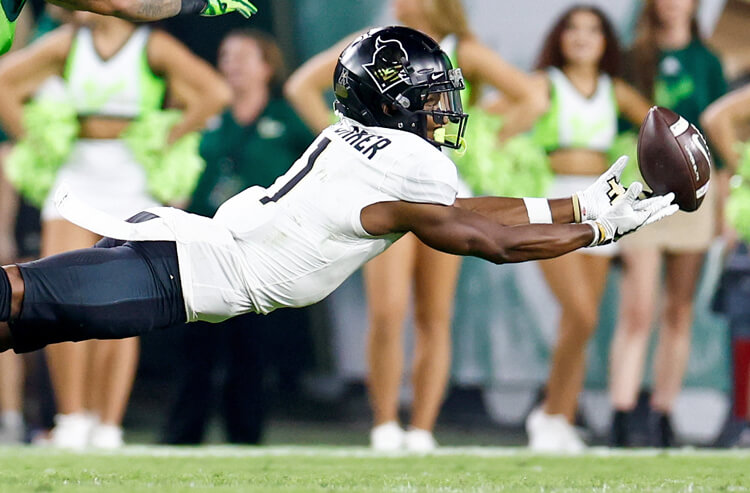 UCF vs Tulane Odds, Picks and Predictions: Knights Won't Roll Over in AAC Championship
Provided by