Not only will the FCS crown a champion not named North Dakota State or James Madison for the first time since 2010, but the winner will capture its first FCS championship as No. 1 seed South Dakota State Jackrabbits take on the No. 2 seed Sam Houston State Bearkats.

The top-seeded Jackrabbits are 4.5-point favorites on a neutral field but the Bearkats are battled tested, having defeated both NDSU and JMU on their way to the title game.

Which team is the best side to bet? Find out in our best college football free picks and predictions for the FCS Championship Game of Sam Houston State vs. South Dakota State, with kickoff set for Sunday, May 16 at 2:00 p.m. ET.

The FCS Championship game could get a little wet and wild at Toyota Stadium in Frisco, Texas. The forecast is calling for a 50 percent chance of rain Sunday with scattered thunderstorms in the region. Temperatures will be in the low 70s, with a 12-15 mile per hour wind gusting towards the northeast corner of the stadium.

When we say Sam Houston State is battle-tested, we weren’t kidding. The Bearkats eliminated North Dakota State in a thrilling 24-20 game as 2.5-point underdogs and then followed that up by coming back from down 24-3 to upset James Madison 38-35 as 1.5-point pups.

SHSU will attempt to use their team speed and high-octane passing offense to put South Dakota State on their heels. The Bearkats are led by quarterback and Southland Conference Player of the Year, Eric Schmid, who is averaging more than 331 yards of offense per game, throwing for 17 touchdowns and rushing for eight more.

While the Jackrabbits’ defense has strong numbers against the pass this season, they did not face too many strong passing attacks until Southern Illinois in the playoffs, where they allowed 316 yards through the air in a 31-26 win.

But the key matchup for the FCS championship will be in the trenches when South Dakota State has the ball. The Jackrabbits have the best offensive line in the FCS and arguably the best running back duo in Pierre Strong Jr. and Isaiah Davis.

They will be in tough against a physical and athletic Bearkats’ defensive front that allowed just 78.9 rushing yards per game. But if Strong can make the SHSU defense respect the run just enough, then quarterback Mark Gronowski can use play-action to take advantage of an aggressive Bearkats defense.

At the end of the day, this is a fantastic matchup from top to bottom and while Sam Houston has had the tougher playoff run, South Dakota State played in the much tougher conference. We’re backing the team that has been more consistent and can win the battle at the line of scrimmage when they have the ball, and that’s the Jacks.

The total for the FCS Championship is an interesting number. First of all, Sam Houston State averages 39.3 points per game this season while South Dakota State put up a respectable 30.7. But on the other side of the ball, the Kats allow 19.3 ppg while the Jacks have allowed 17 points or fewer in four of their last five games, which includes limiting opponents to three points three times.

So, with two good offenses and two good defenses, which side of the total do you lean? Well, we can say this: both offenses have the ability to attack their opponents’ respective weaknesses.

The Bearkats can use their team speed to attack the Jackrabbits' tough but slower defense, particularly attacking the Jacks’ linebackers in coverage. Schmid can work the ball around to his elite weapons in wide receiver Jequez Ezzard and running back Ramon Jefferson. Plus, SDSU showed some holes, allowing all those yards and 26 points to Southern Illinois.

On the other side, while the Kats have a disruptive defensive front, Gronowski is good enough to take advantage of that aggression with his ability to run (7.3 yards per carry) or through the play-action game. And while SHSU has a strong defense, they have allowed 55 points the last two weeks against better competition. Bet this one to go Over the number.

Did you know that if you parlayed today’s Sam Houston State vs. South Dakota State picks, you could win $26.45 on a $10 bet? 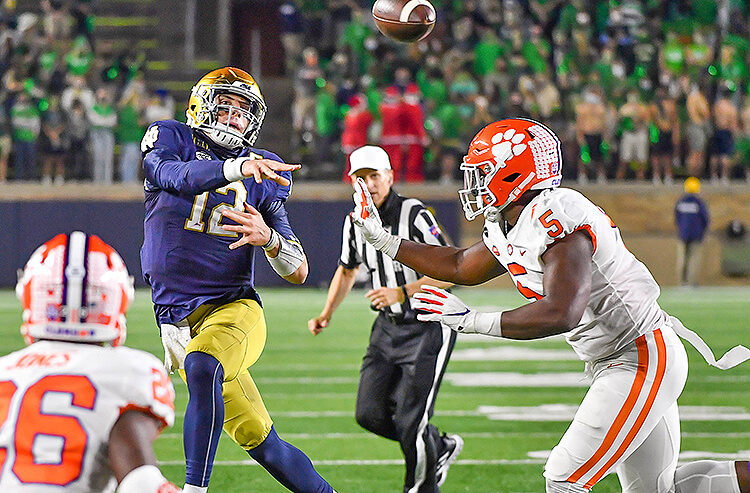 College Football Odds Week 16: Opening Lines and Sharp Money
About Us
Contact Us
Careers
Our Team
Our Community