Blake Shapen is looking like the smart choice to have won Baylor's QB battle, and he may just be the difference against an Oklahoma State defense that gets picked apart through the air. Find out what our college football picks see on Saturday.

In a rematch of last year’s dramatic Big 12 title game, the Oklahoma State Cowboys head to face the Baylor Bears with the conference somehow more up for grabs than expected heading into the season.

It would be overzealous to say the winner of this game will immediately be on the track to reappearing in the conference championship game, but every win against a notable Big 12 opponent should stand out this season amid the broad chaos unfolding in the conference.

Here are our free college football picks and predictions for Oklahoma State vs. Baylor on October 1, with kickoff set for 3:30 p.m. ET.

Baylor head coach Dave Aranda deserves credit for being an above-board coach. Plenty of coaches in the country would have prolonged a nominal quarterback competition into the preseason to keep both options on their roster rather than risk one of them jumping into the transfer portal. But Aranda knew he wanted to start junior Blake Shapen this season, and he told as much to fifth-year veteran and incumbent starter Gerry Bohanon after spring practices.

Thus, Bohanon now starts for South Florida and Shapen is leading the Bears. With each week, Aranda’s decision looks smarter. Bohanon has thrown six interceptions this season with no touchdowns, while Shapen is completing 69% of his passes with seven touchdowns compared to only one pick.

That decision will be the defining factor of this Big 12 tilt. With defensive coordinator Jim Knowles now directing tacklers at Ohio State, the Cowboys defense has fallen off this season. It’s hard to believe the best run defense in the country last season was entirely because of Knowles’ scheming — especially with long-respected coach Derek Mason now taking over — but the evidence on the field suggests that was the case.

Actually, let’s back off that. Oklahoma State is stopping the run just fine. It’s the passing game the Cowboys are struggling with. Disregard their 63-7 dominance of FCS-level Arkansas-Pine Bluff. In their other two games, against Central Michigan and Arizona State, they gave up 8.86 yards per pass attempt. Last year, that would have ranked No. 123 in the country.

It should go without saying, the Chippewas and Sun Devils are not potent enough offensively to justify such defensive failures.

Baylor might be, particularly with Shapen. He has not had to do too much for the Bears thus far, but what’s been needed, he’s done with efficiency. In a tight game last week at Iowa State, Shapen threw for 238 yards and three touchdowns on 19-of-26 passing.

Oklahoma State is ripe to get exploited to a similar tune.

Handicapping against a defense specifically because of its woes against the passing game suggests it could get burned late. If Baylor has to drive for the win in the closing minutes, Aranda has been increasingly aggressive about going for a regulation victory rather than playing into overtime. The career defensive coordinator did not think that way in his first season as the head coach in 2020, but he learned quickly.

With that in mind, the 1.5- or 2.0-point spread may be too steep, and the cheap money line may be the smarter wager.

If there’s reason to side with Oklahoma State, it’s offensive efficiency. When the Cowboys put together a decent drive — one within the 40-yard line — they generally score. Averaging 5.84 points per such possession is among the absolute best in the country and, frankly, isn’t far from perfect.

Oklahoma State’s success comes on early downs — albeit moments Baylor’s defense usually stands up, as well. If the Cowboys continue that trend, they could exert control on this game early.

Nonetheless, Baylor has gone 3-1 ATS this season, outpacing expectations by a total of 28 points thus far. For comparison’s sake, Oklahoma State has gone 2-1 ATS, but has fallen half a point short of those net expectations.

A matchup of one strong passing offense (the Cowboys) against an average defense (the Bears) and one balanced offense (Baylor) against a defense ripe to be picked apart through the air (Oklahoma State) creates an idea of offensive potency. Both these defenses have enough holes to be taken advantage of.

The key to reaching that total may be the Cowboys keeping the pressure on the Bears via that red-zone efficiency. If Oklahoma State continues to score more touchdowns than anything else when it gets just 10 yards into Baylor territory, then that alone should create enough urgency to keep this entertaining. 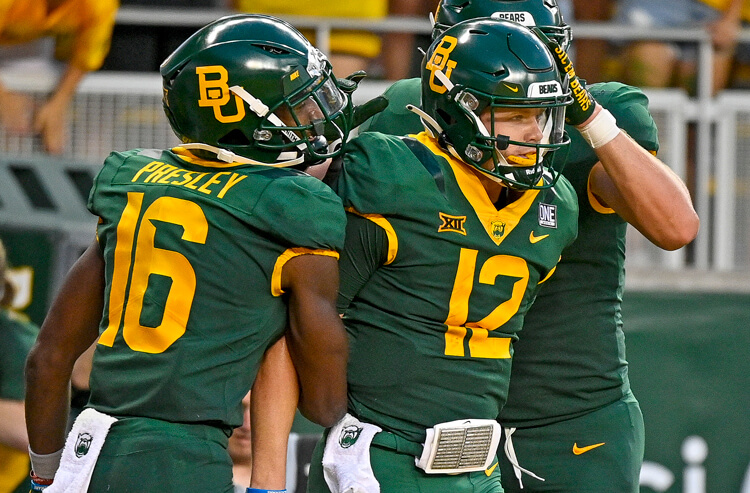