UNC and Notre Dame make for an interesting contrast, as the Tar Heels score at will, but might not be able to stop even the Irish's feeble fight. With ND perhaps in a rhythm, we're seeing value in early points.

After getting their first win of the Marcus Freeman Era, the Notre Dame Fighting Irish have to go on the road to try to slow a dynamic offense. Sophomore quarterback Drake Maye has the North Carolina Tar Heels humming, and he alone may be able to outscore the sluggish Irish offense.

Here are our free college football picks and predictions for Notre Dame at North Carolina on September 24, with kickoff set for 3:30 ET.

Notre Dame famously plays only USC, Stanford, and Navy on an annual basis, but it is beginning to feel like North Carolina has joined those ranks. This is the third straight year the Irish and Tar Heels have matched up, with Notre Dame winning the previous two by multiple possessions each.

Both those games involved fast starts for both offenses. Halftime last year saw the Irish leading 17-13. On Black Friday in 2020, the game was tied at 14 before the end of the first quarter.

Some of that is replicable. North Carolina offensive coordinator Phil Longo has shown an ability with his opening script, as has Notre Dame’s Tommy Rees. That 2020 start, in particular, stands out, as the Heels had the Irish on their heels in that first quarter before Notre Dame’s defense found a way to get pressure on Sam Howell and held North Carolina to only three points in the final three quarters.

The Heels’ offense may be more explosive nowadays with Drake Maye at the helm. His stats read like a video game. The opposition doesn’t matter: When you put up 930 passing yards and 11 touchdowns in your first three career starts, it stands out — not to mention rushing for another 146 yards and one more score.

If there is going to be a hold-up to a fast start Saturday in Chapel Hill, it will come from the Irish offense. As inept as Notre Dame’s offense has been this season, it scored on consecutive possessions for the first time all year against Cal last week, putting points on the board on three straight drives in the second half against a stout Bears defense. It started to find some rhythm.

That rhythm may find a willing dance partner early in North Carolina. The Heels have given up first-quarter scores to all three opponents this year — and as rough as the Irish offense has been, it still rates better than Florida A&M’s, Appalachian State’s and Georgia State’s — including three touchdowns.

Two offensive coordinators whose opening scripts proven track records, including against each other. A top-flight quarterback producing to overcome a lackluster defense, against an offense maybe — just maybe — finding some semblance of consistency. All this adds up to a thought of an early Over, perhaps as early as the first quarter.

Shopping finds a first-quarter total of 10.5, and that number is too low not to jump Over, especially when pondering first-half totals of 27.5 or 28.

This spread has remained within the 2s all week, essentially moving the juice of a pick’em. Where you land on that likely depends on what you think the Irish offense can manufacture against the Heels defense. After all, with a shorthanded roster, Florida A&M gained 335 yards at North Carolina. SP+ considers Appalachian State’s offense to be rather comparable to Notre Dame’s, and the Mountaineers scored 40 points in just the fourth quarter against the Tar Heels. Georgia State looks anything but good, yet it averaged 4.7 yards per carry (sacks adjusted) against North Carolina.

The Irish may find offensive success, even if they suddenly may have even fewer offensive options. Junior tight end Kevin Bauman has caught three passes for 44 yards this season, a meager output, but on an offense that has rarely thrown the ball downfield, his two catches of 18 and 22 yards stand out. He got twisted up in practice this week and his Saturday availability is now uncertain.

Of course, classmate Michael Mayer remains — and this seeming tangent may be an excuse to remind all that the anytime touchdown prop on Mayer is at -115. That is not as luxurious as last week’s +135, which cashed, but it should still be pondered. Notre Dame junior quarterback Drew Pyne continues to look to Mayer more than anyone else, targeting him five times last week though completing only two passes to him. Early on, Pyne missed Mayer twice when the preseason All-American was wide open, his jitters undoing his successful play calls.

Rectifying that early could prove doubly profitable, between the first-quarter Over and another Mayer anytime touchdown.

When so eager to suggest a first-quarter Over, pumping the brakes on the full-game total may be a surprise, but the 55 or 55.5 number widely available has fallen from an early week peak at 59 and 60. It may have fallen for a reason, and not because the Irish offense forces writers to look up so many synonyms for “ineffective,” “inept” and “struggling.”

That 2020 game flow lingers. Notre Dame solved Longo’s offense as soon as the first quarter ended. The same can somewhat be said of 2021, when only big plays got the Heels into the end zone after the first quarter.

As good as Maye is, Notre Dame’s defense has not been a problem this year. Aside from failing to force a turnover to date, it has been a decided strength. With head coach Marcus Freeman familiar with adjusting to Longo’s offense, trusting that defense after the first quarter may hold credence once more.

Notre Dame is 4-1 ATS in the last five meetings between these two, a stretch that dates back to 2008, but more pertinently, the Irish have gone 3-0 ATS in the last three, games held in 2021, 2020 and 2017. Find more NCAA betting trends for Notre Dame vs. North Carolina. 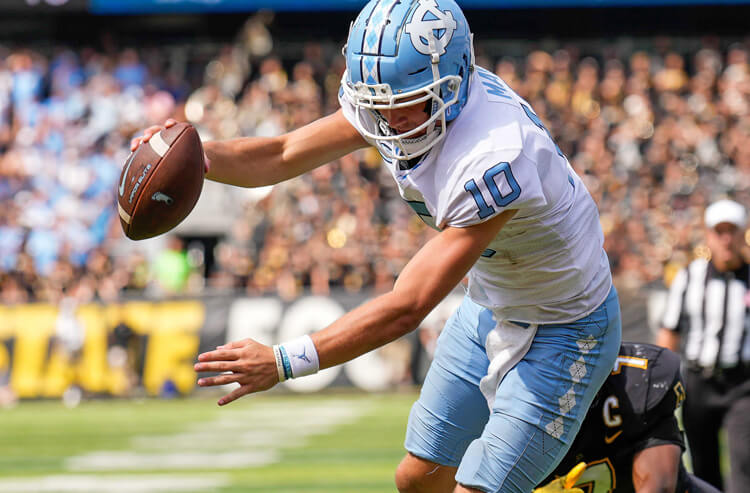