NC State vs North Carolina Odds, Picks and Predictions: Tar Heels Get Back in Win Column

North Carolina suffered a setback last week against Georgia Tech but this offense led by Drake Maye should have more than enough firepower to cover against rival NC State. Read more in our college football betting picks below.

ACC football on Black Friday afternoon sounds good to me — and we have a great one when the NC State Wolfpack (7-4) meet the No. 17-ranked North Carolina Tar Heels (9-2).

NC State is looking to end a two-game losing streak, while North Carolina suffered a bad 21-17 home loss to Georgia Tech in Week 12.

Which will come out on top in this ACC rivalry? Read our college football picks and predictions for NC State vs. North Carolina below to find out.

North Carolina had a small hiccup last week, but they are the much better team in this matchup and I expect them to cover this 6.5-point spread.

The Tar Heels are already slated to play Clemson in the ACC title game, but this is a rivalry they haven’t fared well in of late. but they are 5-0 ATS in the last five meetings and will cover at home on Friday.

Drake Maye has been outstanding this season, ranking third in the country in passing yards with 34 scoring strikes against just four interceptions. He's the Tar Heels' leading rusher, scampering for 597 yards and five TDs. The offensive line doesn’t keep his jersey clean.

North Carolina will get a real test from the nation's 15th-best scoring defense. They apply the pressure to the QBs and have produced two sacks and nearly two interceptions per game. NC State is the second-best rushing and ninth-best passing defense in the ACC, and they will look to take it to the freshman on Friday.

Offensively, the Wolfpack are in trouble. They’ve scored 30 points over their last two games, their starting QB is out for the season, their backup is hurt, and freshman QB Ben Finley completed just 45% of his passes with a TD pass and an interception in last week's loss to Louisville. WR Thayer Thomas has had a good season and RB Jordan Houston will do most of the rushing and has 500 yards without a TD.

North Carolina has the worst defense in the conference, and I expect NC State will be able to move the chains. However, the Tar Heels have allowed fewer than 30 points in three of their last four games, and while NC State will score, it's hard to trust the Wolfpack offense without Leary under center. The Wolfpack offense has looked lethargic since he was lost for the season and Finley isn’t consistent enough to beat UNC with his arm.

Maye is a legacy kid and has been looking forward to playing in this game for some time. The Wolfpack will test and hound him, but the frosh has delivered with hands in his face all season and I expect him to do so again Friday.

The Wolfpack have allowed just 13 passing TDs this season, the Maye-Downs-Green aerial show will prove too much for NC State to deal with. The Wolfpack offense will try to dominate the clock, but it's hard seeing it achieve this with Finley.

Giving Maye those extra possessions on offense will be all UNC needs to cover this spread. Lay the points with the Tar Heels.

Friday marks the 112th time these schools have met. North Carolina holds a 68-37-6 edge, and the series is 5-5 over their past 10 contests. The Tar Heels are 5-1 ATS over their last six and 5-0 ATS over the past five meetings.

Maye is no stranger to this series as his father was the starting quarterback for UNC during the 1980s and his older brother starred on the basketball team and now plays in Spain.

Freshman QB MJ Morris replaced Leary and has thrown for 648 yards with seven scoring strikes and one interception. He’s rushed for 88 yards and a TD, and NC State is 2-1 when Morris makes the start. No word on his status for Friday, but this game could be much closer if Morris suits up.

College football odds have the total sitting at 56 and I'm leaning toward the Over in this matchup.

North Carolina is a high-scoring side when at home, where the Over is 3-2 this season. They are one of the highest-scoring offenses in the country, meeting a defense allowing 114 points over their past five and 18.7 per game this season.

The Tar Heels' defense is lousy and no matter who is under center for NC State, the Wolfpack should be able to score the football against a UNC defense yielding 142 points over their last five and 30.4 this season.

Light rain without much wind is in the forecast, but I don’t think either offense should be affected too much, as wind matters more than anything else. The Over is 3-3 over the last six meetings between these two squads. 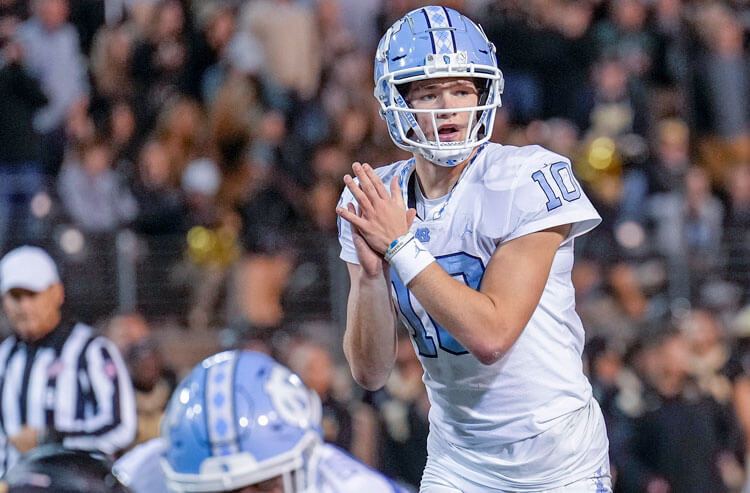 NC State vs North Carolina Odds, Picks and Predictions: Tar Heels Get Back in Win Column
Provided by