Missouri vs Auburn Odds, Picks and Predictions: Target First-Half Under With Focus on Ground Game

Auburn and Missouri are both teams looking to keep the ball on the ground as they hope to avoid turnovers and other offensive slip-ups. This week's battle of the Tigers should be no different and has us highlighting the first-half Under as our best bet.

Missouri and Auburn will meet in an all-Tigers duel when the two face off in each school’s SEC season-opener at noon on Saturday at Jordan-Hare Stadium.

Both teams enter the contest 2-1, but the home team is favored by a touchdown despite falling to Top-25 squad Penn State, 41-12, last Saturday, which marked the worst home loss by Auburn since a shutout loss to Georgia (38-0) at Jordan-Hare back in 2012.

Missouri suffered a nearly identical 40-12 defeat at the hands of Kansas State in Week 2 but found some confidence with a 34-17 victory over FCS school Abilene Christian last weekend.

Which Tigers will come out ahead in this SEC showdown in Week 4? Below are our best free college football betting picks and predictions for Missouri vs. Auburn.

Missouri vs Auburn picks and predictions

Auburn got embarrassed by a pair of freshmen last week, as first-year Nittany Lions running backs Nicholas Singleton and Kaytron Allen went off for a combined 176 rushing yards and four scores on the ground. The Penn State defense also had its way, holding Auburn to a pair of field goals in the first half and one passing touchdown early in the fourth quarter.

The Tigers surrendered 6.3 yards per carry, the most the Tigers have allowed since a loss to Texas A&M in 2020, and managed just 119 yards from their own rushing attack on 36 attempts (3.3 yards per rush). Star running back Tank Bigsby, who ran for 1,099 yards last season, was held to 39 rushing yards on nine carries, and backup quarterback Robby Ashford tallied 29 yards on the ground after he entered the game for T.J. Finley, who will miss Saturday’s skirmish with a shoulder injury.

In addition to Penn State stuffing the run, the Nittany Lions forced four turnovers by a team that has committed eight on the season (two fumbles, six interceptions). Auburn’s defense has yet to record a takeaway in 2022, and it let Penn State score on its first four opportunities in the red zone.

Before Finley exited the game last Saturday, he put up 152 yards through the air and threw one interception while adding a lost fumble. Ashford finished the day with 144 yards on 10-for-19 passing with a touchdown and an interception. Auburn’s offensive line struggled and gave up six sacks in the game and also allowed nine quarterback hurries.

The Tigers looked much better against FCS Mercer, as to be expected, in Week 1 and racked up 28 points by halftime with a pair of rushing scores by Jarquez Hunter, a touchdown run by Bigsby, and a passing touchdown from Finley. However, they came out slow against San Jose State in Week 2, trailing 10-7 at the half before pouring on 17 points after halftime to win 24-16.

Missouri ranks 48th in the nation in rushing defense, but like Auburn, it got exposed against a solid rushing attack in Kansas State, which averages 239.3 yards per outing, the 12th-best mark in the nation.

In their Week 2 matchup, the Tigers gave up 235 yards on the ground on 43 Wildcat carries and surrendered four rushing scores. Missouri also turned the ball over four times and was penalized eight times in the game, bringing its total to 27 penalties on the season.

Neither Auburn nor Missouri has looked good against the run recently, and with the home team playing behind a mobile backup quarterback, we should see a large focus on the rushing attack in this matchup.

Turnovers and penalties may keep both teams from running up the score too quickly. Auburn will likely play more conservatively to try to cut back on takeaways, while Missouri will do its best to exploit the weaknesses Auburn showed last week at home against the Nittany Lions.

If Auburn can cut down on its mistakes, it can bounce back at Jordan-Hare, where the Tigers saw a 17-game home win streak against non-conference opponents snapped last week by a much tougher opponent than Missouri.

The Nittany Lions also boast a better run defense than Mizzou, who allowed a 5.5 yards-per-carry average against Kansas State. Auburn has a chance to stay low to the ground and grind its way to a victory.

The Tigers of Alabama also need to convert in the red zone to get back on a winning track. They failed to score a touchdown on four red-zone drives against Penn State and produced two field goals and a turnover on three of the four trips inside the 20-yard line.

Prior to the Penn State game, Auburn was 8-for-8 inside the red zone. The Tigers had 415 total yards of offense but could not take advantage against the Nittany Lions. Missouri should be a different story, as these Tigers have given up two rushing scores and four field goals on seven opponent red-zone attempts.

Saturday’s excursion is Missouri’s first visit to Jordan-Hare Stadium and will mark the fourth meeting between these teams, with Auburn owning a 2-1 record. Most recently, Auburn won 51-14 at Mizzou in 2017.

Another interesting facet of this matchup: Auburn head coach Bryan Harsin will face off against his former assistant, Eli Drinkwitz, who served as Harsin’s offensive coordinator at Arkansas State in 2013 and worked under him at Boise State from 2014-15.

These two know each other well and their respective teams are producing at an almost identical rate. Auburn averages 430 yards per game, compared to 422.3 by Mizzou, with both offenses averaging around 220 passing yards per contest and just over 200 yards rushing per outing.

Missouri is averaging 32.7 points on offense, while Auburn has accumulated 26 on average but has faced tougher competition in the early part of the season. Both defenses rank in the bottom half of the SEC in scoring, with Auburn allowing 24.3 points per game and Mizzou giving up 27.

The visiting team found a spark in its passing game last week, with Missouri quarterback Brady Cook completing 21 of 30 passes for 292 yards and three scores and no interception in the win. This was just a week after he went 15 of 27 for 128 yards and was picked off twice.

Auburn’s starter, Ashford, attempted a total of 10 passes across the San Jose State and Mercer games but ran for 129 yards on 13 carries before he earned significant playing time in relief of Finley against Penn State.

The Under has hit in 12 of Auburn’s last 15 SEC games, including its last six against the East Division, while the total has gone Under in all four of Missouri’s last four road games.

In order to win this battle, Auburn will need to lean on its ground game, keep the ball out of the air — where they turn it over most — and buckle down on Missouri’s rushing attack while allowing the visiting team to hurt itself with penalties, as it’s done the first three games of the season. 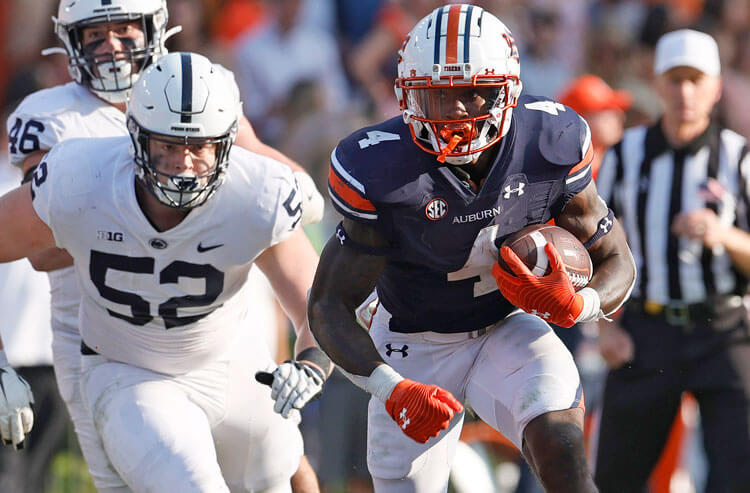 Missouri vs Auburn Odds, Picks and Predictions: Target First-Half Under With Focus on Ground Game
Provided by