Are you ready for some spring football? Yup, thanks to the NCAA pushing back the FCS season due to the ongoing pandemic, football fans don’t have to wait long to dive back into college football betting.

The FCS season opens with the McNeese State Cowboys of the Southland Conference visiting the Tarleton State Texans, who are making their NCAA Division I debut. The Cowboys are slight 1.5-point road favorites.

To help you navigate these little known programs, here are our best college football free picks and predictions for McNeese State at Tarleton State, with kickoff set for Saturday, Feb. 13 at 7:00 p.m. ET.

It may be called spring football, but it's going to feel like winter for this football game in Texas. Temperatures at game time will hover around the 25-degree mark, with a seven to 10 mile per hour wind blowing in from the northeast that will have it feeling closer to 17 degrees.

Former UTSA head coach and LSU assistant Frank Wilson finally gets to coach his first game at McNeese State, but he has some returning talent to work with.

The Cowboys went 7-5 in the Southland Conference last season, with a middle of the pack offense that averaged 385 yards and scored 26.1 points per game. They return starting quarterback Cody Orgeron (yes, it’s Ed’s son), who threw for 2,268 yards and 24 touchdowns last season.

Orgeron added 426 yards on the ground and that should be where the Cowboys do most of their damage. The senior QB will hand the ball off to former USF back Elijah Mack, who ran for 558 yards on 4.4 yards per carry last season.

Tarleton State was a Division II powerhouse, going 23-2 over the last two seasons, but are in a tough spot as they prepare to play in their first-ever Division I game.

The Texans have to replace a ton of talent, starting with quarterback Ben Holmes, who threw for 3,338-yards in 2019. On top of that, they have to replace their top rusher, receiver, and tackler. Western Kentucky transfer quarterback Steven Duncan will likely be the man under center for this matchup.

While Tarleton State veteran head coach Todd Whitten has a strong offensive system, they have a lot of pieces to replace on the fly in what is a clear step up in competition. McNeese State should find out a way to win this one on the road and we’re happy to take them laying less than a field goal.

While Tarleton State was known as an offensive juggernaut in Division II, they may be in for a slow start in their FCS debut. As mentioned, the Texans have to replace many key pieces on offense and have to go against a McNeese defense that was one of the best in the Southland last season.

The Cowboys ranked second in the conference in total and scoring defense, and while they lost a handful of starters, most of the front seven returns, including 2019 second-team preseason All-American Isaiah Chambers. The former TCU and Houston defensive end led the team in sacks in 2019.

With the McNeese offense solid but not outstanding, combined with some freezing-cold temperatures, this one may be more of a defensive battle than some would think.

Did you know that if you parlayed today’s McNeese State vs. Tarleton State picks, you could win $26.45 on a $10 bet?

Where Can I Bet on College Football Odds? 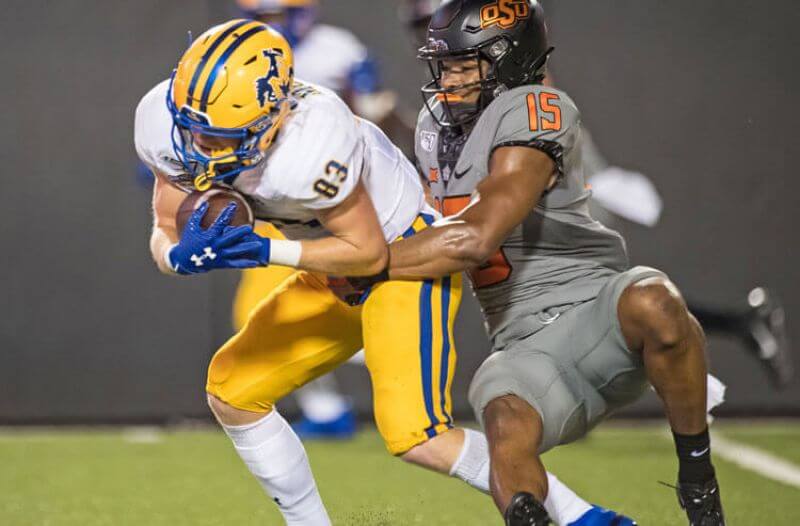