Maryland vs Michigan Odds, Picks and Predictions: Wolverines Too Well-Tuned

Michigan hasn't played strong competition so far, but the way it's utterly dismantled them gives us every reason to have faith it's once again an elite unit. See why we're backing the Wolverines to handle Maryland with our college football picks.

Two undefeated Big Ten teams will collide on Saturday, as the Maryland Terrapins visit the Big House to take on the No. 4 Michigan Wolverines.

Both Maryland and Michigan have jumped out to 3-0 records against weak competition, and each faces a notable step up in competition on Saturday. We’ll break down how each team will react to the challenge in our college football picks and predictions for Maryland vs. Michigan on September 24.

Maryland vs Michigan picks and predictions

The Wolverines have blown away their first three opponents, though that was only enough to meet expectations. Michigan started the season with games against Hawaii, Colorado State, and Connecticut — three teams with a combined record of 2-9 on the season.

That’s not to say the Wolverines haven’t been impressive. They haven’t just beaten these teams — they’ve dismantled them. Michigan is averaging over 55 points per game, while allowing only 17 in total across these three games. It’s easy to overlook these uncompetitive matchups, but only an elite team can consistently score such lopsided results against weaker FBS schools.

Maryland has played only slightly better competition, also building a 3-0 record. While wins over the Buffalo Bulls and Charlotte 49ers proved little, the Terrapins showed they are at least a solid Big Ten team in a 34-27 win over the SMU Mustangs last weekend.

Maryland hasn’t blown out teams by nearly the margin Michigan has, and they’ve allowed even their weakest opponents to score. Charlotte put up 21 points against the Terrapin defense, while Buffalo managed to score 10. That doesn’t bode well for Maryland as it faces by far its biggest defensive challenge of the year.

Michigan has named J.J. McCarthy its starting quarterback after he completed 30 of 34 passes over the first three weeks of the season. Junior running back Blake Corum has scored seven times on the ground and is averaging 6.9 yards per carry to lead a deep Wolverines rushing core. In total, Michigan is running for an average of 231.3 yards, part of an offense that’s averaging nearly 500 yards a game.

The Terrapins have given up 392 yards per game against three weaker teams. Michigan should be able to move the ball easily and score often, just as it has over the first three weeks of the season.

Maryland can score as well, and this could turn into a shootout if the Wolverines defense shows cracks against a more polished offense. But while it remains an open question as to how well the Terrapins can keep up, there’s no doubt that Michigan will put up plenty of points on Saturday. I’m betting Michigan to go Over its team total of 41.5, allowing me to count on the Wolverines offense without worrying about what Maryland does in response.

The line on this game has remained steady since opening, with Michigan as a 17-point favorite. That’s by far the smallest spread for the Wolverines this year, who covered last week as a massive 47.5-point favorite against UConn. Overall, Michigan is 2-1 against the spread this year, coming up short only in a 56-10 win over Hawaii in which it was a 52-point favorite.

Maryland is also 2-1 ATS, and has been favored in its past three matchups. Last week, the Terrapins covered as 2.5-point favorites against SMU.

Michigan has gone 6-1 against Maryland since the Terrapins joined the Big Ten. That includes a 59-18 win for the Wolverines in Maryland last year. Michigan held Maryland quarterback Taulia Tagovailoa mostly in check in that game, as he threw for just 178 yards while throwing for one touchdown and running for another.

If Maryland wants to stay in this game, it will need to play a more disciplined brand of football than it did last week. The Terrapins took 15 penalties for a total of 141 yards against SMU. Given Michigan’s prolific offense, they can’t give up that many free yards and first downs against the Wolverines.

Both of these teams have already proven they can score points, and the total reflects that. Sportsbooks opened the Over/Under at 62, and it has risen up to 64.5, which ranks among the higher numbers on the board this weekend.

Michigan has gone for over 50 points in each of its first three games and leads the nation in scoring at 55.3 points per game. But Maryland is no slouch on offense either. The Terrapins have scored 40.3 points per game, and have been particularly effective through the air, averaging 311.7 passing yards against their first three opponents.

That may not play out against a Wolverines defense that has shut down opposing quarterbacks so far this year, as Michigan is giving up just 91.3 yards per game in the air. The Wolverines have only allowed 194 yards of offense per game total, good for third-best in the nation.

That said, Michigan hasn’t faced a quarterback anywhere near as good as Tagovailoa this year. He’ll likely be able to generate at least some offense against the Wolverines. So far this season, Tagovailoa has thrown for six touchdown passes against two interceptions while completing 77.3% of his passes.

It’s worth noting that despite all their scoring, both of these teams have gone Under the total in two of their first three games. While Michigan should score against a mediocre Maryland offense, the Over/Under may hinge on just how many big plays Tagovailoa can find against a largely-untested Wolverines defense.

Michigan has scored at least 42 points in six of its last seven games. Find more NCAA betting trends for Maryland vs. Michigan. 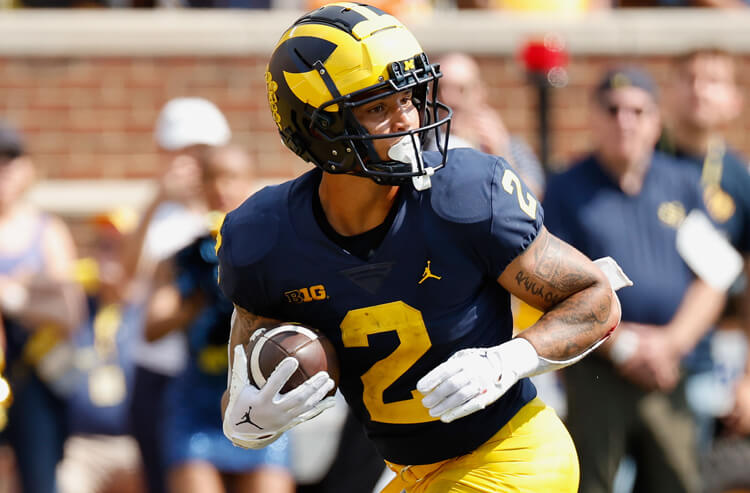 Maryland vs Michigan Odds, Picks and Predictions: Wolverines Too Well-Tuned
Provided by