The ACC Championship is here, with North Carolina coming in as the massive underdog against Clemson. The Tigers may be favored, but our college football betting picks believe UNC has enough to pull off the upset. 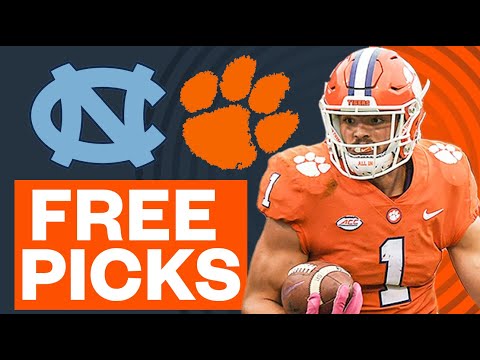 The ACC championship game will have no bearing on the College Football Playoff this year, but it will have a role in lasting conference legacies. The Coastal Division has not beaten the Clemson Tigers in the title tilt since 2009, losing six games to Dabo Swinney in that stretch.

In total, the Coastal has one just ACC championship since 2010, last year’s Pitt win. The North Carolina Tar Heels have a strong chance at changing that in the final year of divisions in the ACC, though a UNC win will still qualify as an upset.

Here are our free college football betting picks and predictions for Clemson vs. North Carolina on December 3.

Motivations are tricky, and this month in college football, they can be absolutely confounding. After years of chasing playoff berths, how much will Clemson really care about winning the conference? At best, that want can be doubted.

North Carolina has not come near this level of success since 2015. Mack Brown’s return to Chapel Hill may be marked by this game. Drake Maye’s 2023 Heisman campaign may begin now. At worst, the Tar Heels should give an honest effort in Charlotte.

Of course, an honest effort alone may not be enough to top the ACC’s big bad.

UNC laying eggs against Georgia Tech and North Carolina State the last two weeks made that much clear. The Wolfpack were the beneficiary of three short fields, though the Tar Heels’ loss to the Yellow Jackets was a bit more inexplicable.

Has Maye been figured out or did one game turn into a second letdown? His success through 10 games was sustained enough and prolific enough to argue against defenses having outright solved Maye.

And Clemson’s pass defense has not been particularly stout this season, giving up 227.6 yards per game (No. 74 in the country) and 6.5 yards per pass attempt (No. 28). Look at passer rating, and the Tigers’ defense ranks No. 39.

That pass defense is soft enough for Maye to cut through if he is back in the form we saw for nearly three months. If, however, this two-week slog is a sign of a longer problem, then Clemson will feast.

Well, which is it?

Siding with the 10-game sample size compared to the two-game showing, however recent, shines value on the Tar Heels’ money line, paying out at about 2.5-to-1. That value alone makes it a worthwhile bet.

This line has hardly moved this week, opening north of a touchdown on Sunday and remaining there aside from occasionally and briefly touching -7.0. That hook forces two thoughts, both supporting North Carolina.

First of all, an offense that has averaged 37.1 points per game and broke 40 points on four different weekends is an offense primed to score a late touchdown for a backdoor cover. Maye does not step, and neither does Mack Brown. A fourth-quarter flurry could quickly turn this into a one-score result, even if only nominally.

Secondly, Clemson head coach Dabo Swinney continues to be cagey with his plans for when to bench DJ Uiagalelei or not.

“Does he gotta play well? Yep,” Swinney said on the radio this week. “There’s no room for error there. But he’s shown that he’ll respond. So there’s really not much more than that.”

Stalling on that switch has proven costly and could again.

This total is exactly where you want it to be, high enough at 63.5 that it is clear, bookmakers favor the dynamism of North Carolina’s offense above all else on Saturday. Well, that and the Tar Heels’ absolutely atrocious defense.

If Gene Chizik thought he would parlay this return to the sidelines into a head-coaching gig, it is hard to imagine that coming at the FBS level. While North Carolina scores more than 37 points per game, it also gives up more than 30.

If there is any salvage for Uiagalelei, it should be facing a Chizik-coordinated defense.

Clemson has been favored by a touchdown or more in three of its last five games, going 1-2 ATS in those contests. Find more NCAA betting trends for Clemson vs. North Carolina.