The Longhorns may be a mixed bag, but Week 13 presents a favorable matchup against a team that may be lacking spirit after a tough home loss to No. 4 TCU. Read more in our Baylor vs. Texas betting picks below.

Despite more letdowns and underperformances in 2022, the Texas Longhorns still have a shot at making the Big 12 title game.

The path to it is simple: beat the Baylor Bears Friday afternoon and pray Kansas can upset Kansas State Saturday night. Having beaten KSU earlier in the year, Texas would get through on a tiebreaker.

The Longhorns should surely be the more motivated side with Baylor out of the running and already bowl eligible, but can they actually rise to the occasion? Read our college football picks and predictions for Baylor vs. Texas below to find out.

Baylor vs Texas picks and predictions

For every disappointing letdown, the Texas Longhorns often flash some greatness to reel us all back in.

Such was the case last week, following up the worst performance of the season — which saw the offense score just three points in a 17-10 loss to No. 4 TCU — with the best of the season... a 55-14 road spanking of Kansas.

In the TCU game, Texas' star running back Bijan Robinson was held to 29 yards on 12 carries for a 2.4 yards-per-carry average. The following week against Kansas, he exploded for 243 yards and four touchdowns (both career highs) on 25 carries and was good for nearly 10 yards per attempt.

And while the Baylor Bears' season-long defensive metrics aren't too bad at first glance, the run defense has been flipped on its head of late.

Through the first eight games, Baylor's rushing defense allowed just 113.3 yards per game on an impressive 3.4 yards per carry (would be a Top-20 mark in the nation), but it's absolutely plummeted in the three weeks since, getting crushed for 180 yards per game and 4.6 yards per attempt — a mark that would place it just inside the Top 100.

I expect that to be Baylor's downfall, with Texas' ground game among the best in the country (12th in yards per carry) in addition to the momentum from last week's performance, where the Longhorns piled up 427 yards and six scores on the ground.

Added to that critical mismatch is the situational spot for these two squads: Already bowl eligible but out of the running in the Big 12, Baylor has nothing to play for in this matchup, whereas a win for Texas keeps the door open and puts the pressure on Kansas State to take care of business Saturday night.

Over the course of 60 minutes, this run game will impose its will on the Bears' defense — enough to build some separation on the scoreboard and extend Texas' conference title hopes for at least 24 hours.

Texas hit the board as a 7.5-point home favorite and has been bet up to -8.5 at most books, with Baylor +9 also available in a few spots.

The highs are high (49-0 win at Oklahoma) and the lows are just as low (offense scoring three points vs. TCU) with this team but reputation aside, these Longhorns should be better than their 7-4 record suggests, with losses to Alabama (second half) and Texas Tech coming without quarterback Quinn Ewers.

Baylor is also 7-4 ATS and 4-1 over its last five with the one loss coming in the form of a 31-3 stomping at the hands of Kansas State and its dominant run game. As discussed above, the Bears could have similar problems against Robinson & Co. this week.

They hit the critical 6-win mark (bowl eligibility) back in early November but the buzzer-beating loss to TCU removed any hopes they had of making the title game. With broken spirits and not much left to play for, I'm on the Longhorns.

These teams have a combined 12-10 record to the Over but there's one betting trend that tells the story of this matchup over the last decade.

The Under has hit in nine straight matchups between Texas and Baylor and it's rarely been close — staying Under by an average of 17.7 points over those nine contests.

However, Friday's 55.5-point total would be the second-lowest total of any nine of those matchups and with these two offenses averaging well into the 30s, I'm certainly not lining up to bet the Under here.

Baylor's offense will certainly contribute. How much? That, I'm unsure of. I'm staying away.

The Longhorns are 7-1 ATS in their last eight games after accumulating more than 450 total yards in their previous game. Find more NCAA betting trends for Baylor vs. Texas. 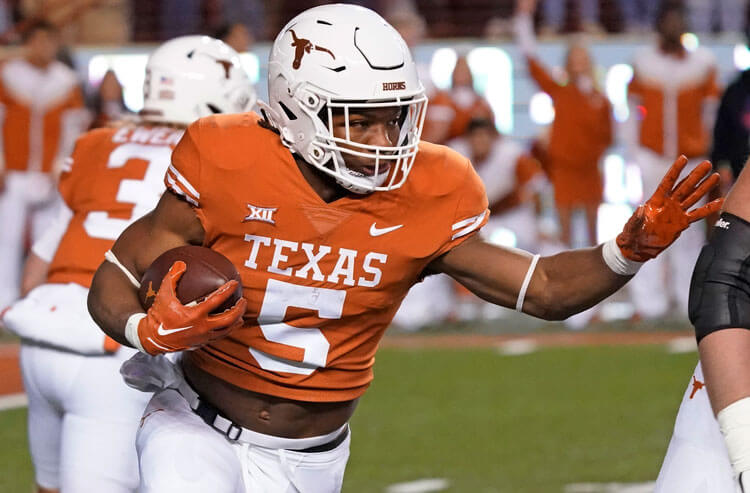