Auburn and South Carolina are down to their second- (and third) string QBs for this weekend's matchup, meaning the focus will be squarely on two very dependable defenses. That means the Under is our focus in our college football betting picks.

The Auburn Tigers had a rough week last week. Not only did they choke away a 28-3 lead to Mississippi State, they also lost quarterback Bo Nix, who needed ankle surgery after getting injured in the game.

The Tigers are already bowl eligible at 6-4, but the rest of the season isn’t looking all that bright. Now they'll prepare for a matchup against the South Carolina Gamecocks, who are college football betting underdogs at home this week but need one more win to become bowl eligible.

Could this be the perfect spot for South Carolina to steal a victory, against a banged-up Auburn team? Here are our free college football picks and predictions Auburn vs. South Carolina on Saturday, November 20.

Auburn opened as a 9.5-point favorite but has now moved down to -7.5, with some outlets even offering a juiced -7. Meanwhile, the total also took a hit after opening at 47.5, dropping by a field goal to 44.5 at most outlets. Use the live odds widget above to track any future line movements right up until kickoff and be sure to check out the full college football odds before placing your bets.

The Gamecocks are 0-5-1 ATS in their last six games as a home underdog of 3.5-10. Find more NCAA betting trends for Auburn vs. South Carolina.

Auburn won’t have Bo Nix under center but the Tigers will have a somewhat experienced quarterback in T.J. Finley, who started multiple games with LSU last season as a true freshman and saw some action earlier this season when Nix was struggling.

Nix will obviously be a huge loss, however, after he totaled 2,294 yards passing and 168 more rushing on 57 attempts. He was inconsistent this season but when he was playing with confidence, he was tough to take down. Auburn will now more than likely rely heavily on the run game with Tank Bigsby, who has 156 carries for 776 yards with nine touchdowns and should be able to get plenty of yards going up against a below-average South Carolina run-stopping unit.

The Gamecocks allow 168.9 yards per game on the ground, despite only allowing 354.7 yards per game defensively. The Gamecocks defense really isn’t that bad as its allowed just 24.4 points per game. However, the offense is only mustering 23.5 pppg and 333.3 ypg.

South Carolina will use its third quarterback this season against Auburn after naming Jason Brown the starter this week. Luke Doty and Zeb Noland have been injured throughout the year, now giving Brown a chance to shine.

He went just 16 for 30 at Missouri last week in a 31-28 loss, throwing for two touchdowns and one interception. It's good that he kept South Carolina in the game... but it’s going to be a bit harder against this Auburn defense though.

Auburn is averaging 31.6 ppg, but the moment T.J. Finley steps in under center, the offense loses a bunch of playmaking. The total has adjusted as well, knowing two backup quarterbacks will start in this game between him and Brown.

Finley is more of a pocket passer and while he can be hard to take down at times, he has no mobility. Meanwhile, Brown barely completed more than 50 percent of his passes against Missouri last week.

Auburn’s defense should put a ton of pressure on Brown and if Finley gets a chance to throw the ball, South Carolina’s coverage and pass rush unit could counter and make plays. In the passing game, the South Carolina defense has allowed just 185.8 yards per game.

The defenses will rule in this one.

With two backups getting the start — against two extremely reliable defenses — how do you not take the under?

Finley was a top recruit, and has plenty of potential, but he’s never been consistent throughout his time with LSU and Auburn.

Meanwhile, Brown is the third-string quarterback for South Carolina and hasn’t completed 60 percent of passes in any games in which he’s gotten extended run this year. 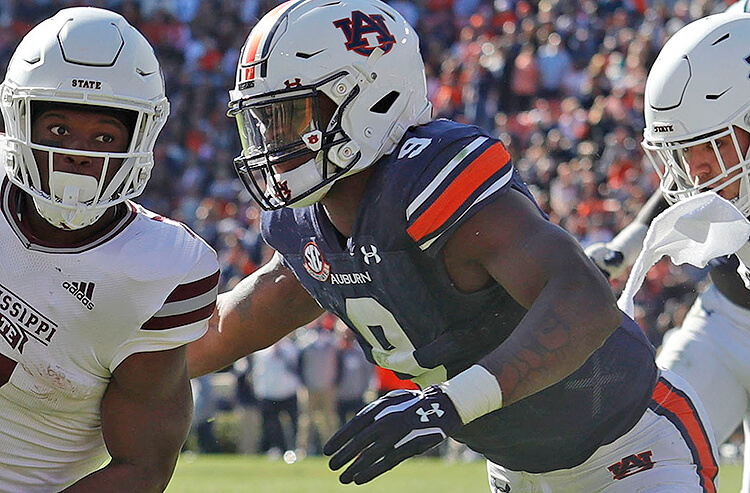