Houston's looking to bounce back from a loss, which doesn't happen often, and our college basketball picks are counting on one of the nation's best teams to crack down on defense. Find out what that means against UCF tonight.

The third-ranked Houston Cougars will get a midweek road test in the American Athletic Conference on Wednesday night as they head to Orlando to take on the UCF Knights.

Houston is coming off its first loss of the conference season and second loss of the entire season on Sunday in a massive upset at home to Temple. The Cougars dropped to 18-2 on the season and 6-1 in the AAC after their loss as 19.5-point favorites. UCF has lost two consecutive games and sits at 13-6 overall and 4-3 in the AAC. Will the Knights rebound at home against one of the best teams in the nation?

Check out our college basketball picks and predictions for the Houston vs. UCF on Wednesday, January 25 to find out.

Houston vs UCF picks and predictions

It’s been a rollercoaster season for the Knights and they’re definitely on the fall right now. The Knights currently sit at 56 in the NET rankings with a NET strength of schedule ranked 86th. However, a win over the top-ranked NET team would certainly boost their resume back into the inside of the tournament bubble.

It won’t be easy for UCF though, without one of their top contributors in Darius Johnson. He averaged 11.8 points, 4.3 assists, 3.2 rebounds, and 2.5 steals on 30.6 minutes per game in his 10 games he played this season. Johnson contributed 17 points, eight rebounds, four assists, three steals, and a block in the December 31 matchup at Houston. He will be sorely missed, assuming he will not be ready to play.

Houston allowed 65 points in that matchup, which is 12 points higher than its season average. In fact, UCF joined the likes of Alabama, Virginia, and South Florida as the only teams to surpass 60 points against this defense. However, without Johnson, even home-court advantage will make this task almost impossible to repeat.

Houston not only plays excellent defense, but it also slows down the tempo to allow fewer scoring opportunities for its opponents. The Cougars rank 334th in the nation at 66.4 possessions per game. Central Florida is no speed demon themselves offensively as they only average 69.9 possessions per contest (198th).

UCF knows their best shot of an upset here is to keep the game as close as possible until late, and the best way to do that is keep the game slow-paced and low scoring. Temple just gave the blueprint on how to upset the Cougars and UCF will try to follow. That means this game is likely to be an Under regardless of UCF’s ability to keep the game close.

A) get a 33% profit boost on any college basketball bet today at DraftKings! Opt-in Now

Turnovers could play a huge factor in this spread with Houston being on the road. That is likely to favor the Cougars in a big way. Houston only averages 9.9 turnovers per game, which ranks sixth in the nation. UCF averages 14.1 and ranks 284th in the country.

UCF forces 14.2 turnovers per game (80th) and Houston forces 15.4 turnovers (40th). Again, advantage Cougars. If Central Florida has trouble getting shots off, it will be lucky to even reach the 50-point mark. That is a huge factor to Houston covering this 9-point spread.

The favorite is 5-1 against the spread in the last six matchups between these two programs. Houston has covered six consecutive road games and 23 of their last 32 games overall. UCF is 0-3-1 in their last four home games against a team with a winning road record. They are also 0-4 ATS in their last four games following a straight-up loss.

This will be a low-scoring game, but it is still much more likely that Houston will cover this big spread than not. Houston will thrive on efficiency in a slow pace and UCF will turn the ball over. I like Houston to win by double digits.

In the game following Houston’s only other loss this season, it held North Carolina A&T to only 46 points, 22 points below its season average. UCF averages a similar 72.1 points per game and if it’s held to a similarly below-average game, this Under is looking good.

UCF has struggled defensively in the last three games and its coach has even called it out recently in post-game pressers. Defense will be the focus for both programs and this game is destined for a slow pace. Surprisingly, this total is almost five points higher than the previous matchup closed despite the loss of Johnson for UCF.

The Under is 10-1-1 in Houston’s last 12 games following a straight-up loss. Find more College basketball betting trends for Houston vs. UCF. 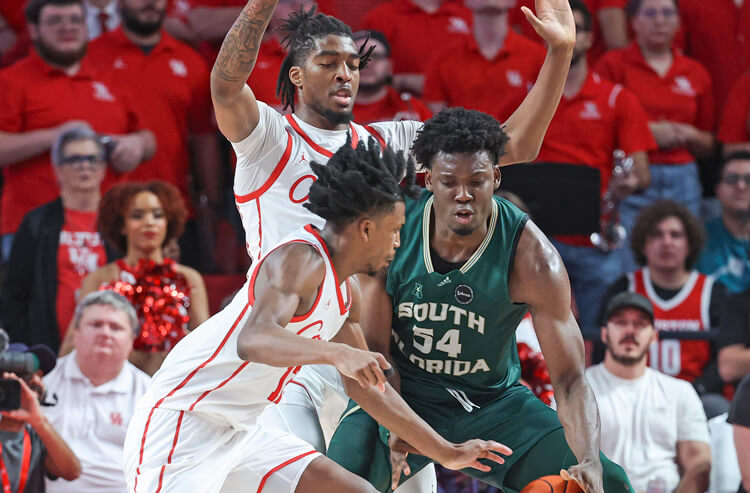 Houston vs UCF Odds, Picks and Predictions: Knights Can't Stand Up to Cougars' Armor
Provided by