Houston vs Tulane Picks and Predictions for January 28

The college basketball betting board for Thursday had a couple of big games postponed due to COVID-19, but two of the top teams in the nation are still taking to the hardwood, including the No. 6-ranked Houston Cougars who head to New Orleans to face the Tulane Green Wave.

Houston is 13-1 and enters this contest as 18-point road favorites with the Over/Under set at 127. We break down the college basketball odds with our best Houston vs. Tulane picks and predictions for January 28, 2021, with tipoff at 9 p.m. ET.

The Under is 22-8 in Houston's last 30 games overall. Find more NCAA betting trends for Houston vs. Tulane.

PointsBet USA pegged Houston -18 and dipped to -17.5 Wednesday night, then got to -17 this afternoon, where the number remains at 6 p.m. ET, three hours ahead of game time. The heavily favored Cougars are taking 78 percent of spread bets and 71 percent of spread money. The total is up a tick from 127 to 127.5, with ticket count and money both running about 2/1 on the Over.

Houston has gotten off to an outstanding start this season and is riding a six-game winning streak into Thursday's contest. The Cougars have also gone 9-3 ATS in their last 12 contests and have covered the spread in each of their past four games.

The main reason behind the Cougars' dominating season is their fantastic defense, which holds foes to just 36.9 percent shooting and 82.3 points per 100 possessions - both good for the third-best mark in the nation.

That said, Houston has struggled on offense, ranking outside the Top-250 by shooting 41.6 percent from the floor. While guard Quentin Grimes leads Houston with an impressive 17.6 points per game, he hasn't exactly been an efficient scorer, firing at just a 38.4 percent clip. As a matter of fact, three of the Cougars' top five scorers are shooting below 39 percent from the field.

That gives the Green Wave more than a glimmer of hope of covering this spread given their own tough play on the defensive end of the floor. Tulane limits opponents to just 89.8 points per 100 possessions, good for 24th in the nation.

Houston clobbered Tulane by 21 points at home less than three weeks ago, going 15-36 from deep in the blowout win. Houston is generally much weaker from long range, though, averaging just 8.3 three-pointers per game at a clip of 33.9 percent, and will likely have a more difficult time covering such a big number Thursday.

We've mentioned how good both schools are at defending and we're going to reiterate that point for our Over/Under bet.

Tulane has also been brutal at putting the ball in the bucket, ranking outside the Top 300 in scoring, averaging 63.5 ppg. Both teams also play at a snail's pace, with Houston 304th in the country in adjusted tempo and Tulane at 287th, according to KenPom.

While 127 might seem like a low output, these two teams often see totals in that neighborhood and still consistently cash the Under.

Tulane has gone 8-2 to the Under this season, while Houston is 22-8 to the Under in its last 30 games going back to last year. Don't hesitate to back the Under here. 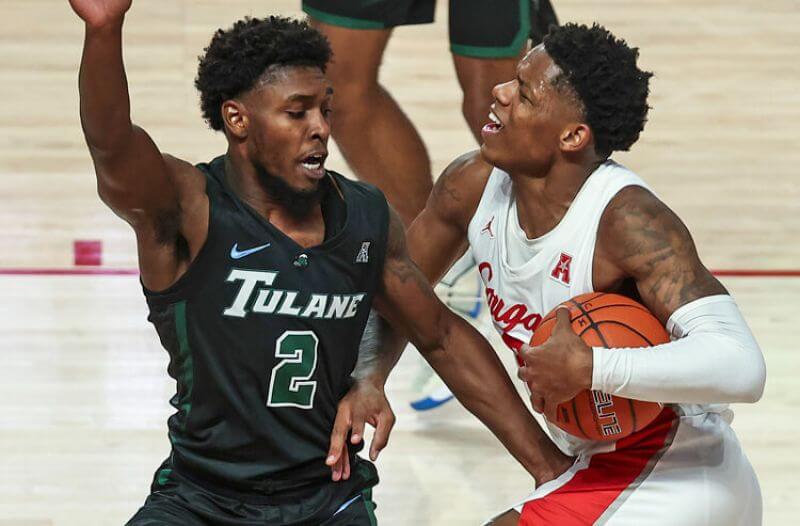 Houston vs Tulane Picks and Predictions for January 28
Provided by