The Vols and their top-rated defense have an SEC foe coming to Knoxville tonight, with the resurgent Bulldogs visiting. Georgia's made positive gains this season but our picks expect Tennessee to serve it a reality check tonight.

The No. 4 ranked Tennessee Volunteers look to continue their early season dominance as they welcome the Georgia Bulldogs to Thompson-Boling Arena on Wednesday night.

The Bulldogs are having a resurgent season under new head coach Mike White but will look out of their depth against a Vols side that is among the best in the nation.

The Vols opened as massive 16.5-point home favorites with the Over/Under at 135.5. Here are my best free Georgia vs. Tennessee college basketball picks and predictions for Janaury 25.

Georgia vs Tennessee picks and predictions

The Bulldogs team total for this game is set at just 59.5 but when you consider their offensive struggles and Tennessee's dominance on defense, the Under looks like a strong play.

The Vols are limiting foes to just 54.4 points per game, and it isn't like that number is amplified by games against weak, small-conference foes. They've held seven of their last 10 Power-Six opponents below 59.5 points.

Of the three schools that went Over that number during that span, Arizona and Kentucky are vastly more talented offensively than Georgia, while Vanderbilt also ranks significantly higher in adjusted offensive efficiency and shot just 38% from the floor.

A) Get a 33% profit boost on any college basketball bet today at DraftKings! Opt-in Now

The Bulldogs are on a two-game skid and are coming off an 85-82 loss to Vanderbilt at home. They shouldn't be too concerned about that, though, since they already have more than twice as many wins as they did all of last season and are 3-3 in SEC play after going a pathetic 1-17 in 2022.

Georgia has been competitive, with wins against Notre Dame and Auburn along with a slew of close defeats, but this is a team that will struggle in several areas vs. a Tennessee team gunning for the first Final Four appearance in program history.

The Volunteers are 15-2 SU and 11-6 ATS in their last 17 games. They recently lost to a vastly talented (albeit underperforming) Kentucky squad but have bounced back with consecutive double-digit victories on the road against Mississippi State and LSU.

Both of these schools play at a below-average pace, with UGA ranking 171st in the country in adjusted tempo and Tennessee ranking 195th.

Be warned, oddsmakers seem to have adjusted to how low-scoring Tennessee's games have been and might be sleeping on how effective the Vols are on the other end of the floor lately.

Sure, the Vols have the top-rated defense in the country, according to KenPom, but they also rank an impressive 31st in offensive efficiency despite the inconsistent shooting. A big reason for that is their hard work on the offensive glass, where they rank second in the country in rebounding rate.

Five of the Vols' last six games have gone above the total while the Over is 5-2 in Georgia's last seven contests.

The Volunteers are 7-3 ATS in their last 10 home games. Find more College basketball betting trends for Georgia vs. Tennessee. 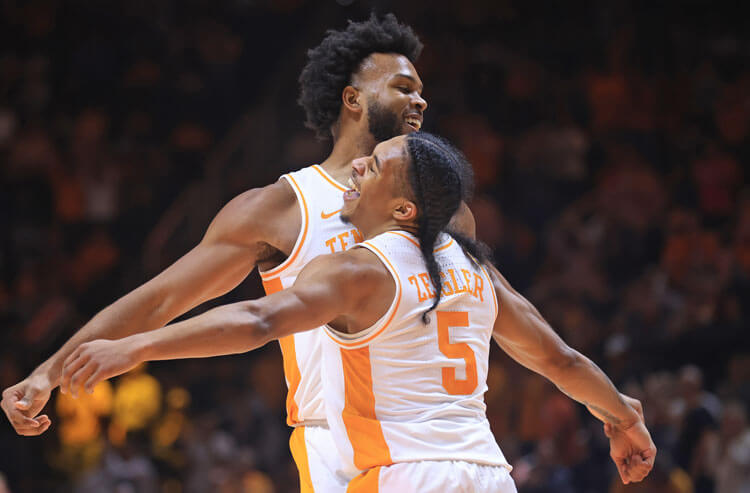