The defending champs came out flat last week but can find a get-right spot against a vulnerable Mountaineers squad. Find out why we're backing them to get back to their winning ways with our Baylor vs. West Virginia picks.

The No. 5-ranked Baylor Bears will try to get back on track after back-to-back losses as they head to Morgantown to face off against the West Virginia Mountaineers on Tuesday. Unranked WVU is fresh off a loss itself and won't find it easy to beat the defending national champs with college basketball betting lines opening with the Mountaineers as 6.5-point home underdogs for this Big 12 showdown.

Here are our best free Baylor vs. West Virginia college basketball picks and predictions for Tuesday, January 18, with tipoff at 5 p.m. ET.

This game opened with Baylor installed as a 6.5-point road favorite with the Over/Under at 138.5. Early money has come in on the Under, shifting the total to 138, while the line has stayed steady as of 10:30 a.m. ET.

The Bears are 16-6-1 ATS in their last 23 games as a road favorite. Find more NCAA betting trends for Baylor vs. West Virginia.

Baylor looked absolutely brutal last week, combining to shoot a pathetic 36 percent from the field and averaging just 58 points per game in home losses to Oklahoma State and Texas Tech. The Bears came into those contests as double-digit favorites and they are now just 1-5 ATS in their last six games.

Baylor entered last week as the No. 1 team in the country and was averaging 82.8 ppg on 49.5 percent shooting. This matchup really comes down to whether the Bears are closer to the team they were earlier in the season or the one that missed ten shots in a row against unranked Oklahoma State.

West Virginia actually dismantled that same Okie State team last Tuesday but followed up by getting hammered 85-59 on the road against Kansas. The Mountaineers have won 10 of their last 12 games but haven't looked good lately. In addition to getting wrecked by the Jayhawks, they also lost by 15 to Texas on New Year's Day and had to rally in the final 10 minutes to stage recent comebacks against UAB and Kansas State.

The Mountaineers have gotten strong play from guards Taz Sherman (18.9 ppg) and Sean McNeil (14.3 ppg) but they rank a modest 100th in the country in adjusted offensive efficiency according to KenPom and they sit outside the Top 300 in assists per field goal made. That poor ball movement will make it tough to score against a pesky Baylor squad that thrives off pressuring ball handlers and forcing turnovers.

West Virginia also really misses big man Oscar Tshiebwe, who transferred to Kentucky during the offseason. Without his powerful presence inside, the Mountaineers are just 227th in the nation in rebounding rate and will likely be killed on the boards by Baylor who ranks 12th.

The Bears might have been throwing up more bricks than Russell Westbrook last week but their overall body of work suggests that they are much better than that. Look for them to shoot better today but it will be their rebounding and defensive play which will lead them to a win and cover.

Both of these teams are coming off some awful offensive performances. We mentioned Baylor's shooting struggles last week, but WVU went just 17-63 (27%) from the field against Kansas.

The Mountaineers' struggles on that end of the floor go further back than that, with WVU averaging 65.8 ppg in its last nine games and the only contest during that span where it scored more than 71 points was against tiny Youngstown State.

After Sherman and McNeil, the Mountaineers scoring ability falls off a cliff, with Jalen Bridges (8.8 ppg) and Malik Curry (7.9 ppg) the only other players averaging more than 5 ppg. They sit outside the Top 200 with a 42.9 FG% while averaging just 99.2 points per 100 possessions.

WVU won't find it easy to get buckets against a Bears lineup that is long and athletic and ranks 11th in the nation in adjusted defensive efficiency. That said, the Mountaineers are capable of locking down as well, ranking 21st in adjusted defensive efficiency and holding opponents to just 30.7 percent shooting from beyond the arc. Back the Under.

Baylor came out of the gate very flat against Oklahoma State but typically plays very well in the early going. The Bears were averaging 39.8 first-half ppg with an average first-half scoring margin of plus-10.7 ppg before Saturday's game against the Cowboys.

Meanwhile, the Mountaineers have gotten off to some embarrassingly poor starts. They trailed Kansas State by 13 points at half two weeks ago, were down by 19 points at halftime against Texas, and even trailed UAB and Eastern Kentucky after 20 minutes. They also mustered just 25 first-half points versus Kent State and were fortunate that the Golden Flashes could only manage 22 points of their own.

Expect Baylor to jump out to an early lead in this one and back them on the first-half spread. 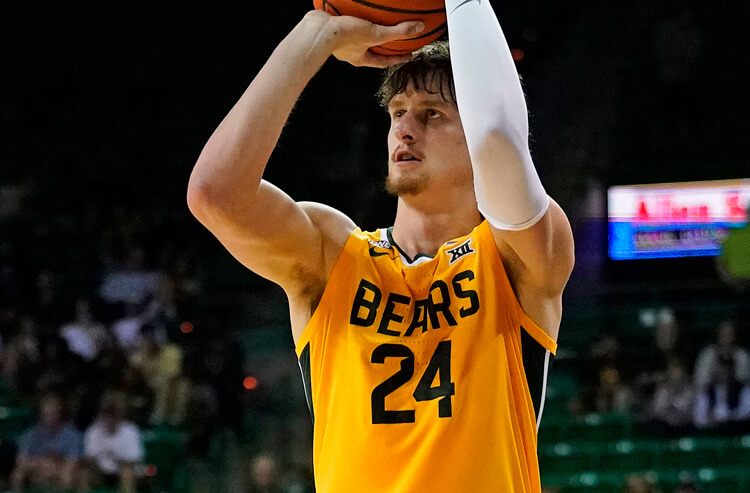