Season of the Square: Public bettors have been beating Las Vegas bookies for eight months

It’s like a nightmare scene from a movie, except in this case, sportsbook directors have lead roles, restlessly rolling around in bed while repeating in sleepy horror:

In Hollywood, the actors would wake up and realize it was all just a bad dream. But a few hours’ drive away in Las Vegas, it’s been all too real the last few weeks. And if you look back, the "Favorite and Over" horror show has been going on for quite a while.

“That pretty much describes the last eight months or so,” Jay Kornegay, who runs the Las Vegas Superbook as vice president of race and sports for Westgate Las Vegas, tells Covers. “It’s been a tough run. We know it can be streaky at times, but it just kind of feels like on this side of the counter, we’ve been on the challenging side.

“The big games are going against us: NFL playoffs, Clemson beating Alabama, the Super Bowl. For the Super Bowl, a lot of books were balanced going in, but by the third quarter, all that in-game wagering on the Patriots to make a comeback went against us.”

Now, the NBA Playoffs are piling on, as public bettors – the so-called squares – rack up winnings by betting on favorites and Overs, often parlaying those two options to double their pleasure. Much of the damage has been done by the top teams in each conference: West No. 1 seed Golden State and East No. 2 seed Cleveland (let’s be honest, Boston is not better than Cleveland, no matter what seeding says).

The Warriors, who have already advanced to the NBA Finals, are a perfect 12-0 SU and 8-4 ATS in the playoffs (5-1 ATS last six), and the Over is a scorching 9-3 in that stretch (5-0 last five). The Cleveland Cavaliers won their first 10 postseason games and, after failing to cover the spread in the first two, they then went on a 7-0-1 ATS tear. LeBron & Co. finally slowed down this week, losing Game 3 against Boston outright and failing to cover in Wednesday’s Game 4 win. The Over is 8-4 in the playoffs for Cleveland.
**video
“The last three weeks have been terrible,” Nick Bogdanovich, director of trading for William Hill US, which is based in Vegas and operates more than 100 books across Nevada, tells Covers. “The thing is, when the public bettors get on a run, they have a little more money to bet, and they get a little more dangerous. So if you get a prolonged run, you tend to notice the hits more.”

Jeff Stoneback, director of trading for MGM Resorts books in Las Vegas, said his shops – including home base at The Mirage on the Strip – have several big casino players taking the favorite and the Over on every game. And he cited one player – not a sharp bettor, but a big player – as an all-too-regular winner.

“I’ve got a guy who comes in for every NBA playoff game, betting $10,000 to $25,000 on favorites and Overs. So sometimes that’s $50,000 a night,” Stoneback tells Covers. “He has not bet one underdog at all, and it’s straight bets, not parlays. But all the parlays have been hitting too, and those add up.”

And it’s not just the final margin of victory and total points that public bettors are taking to the bank. By halftime, they’re cashing in on the same formula.

“We’re not only losing games, we’ve been losing first halves too. They’ve just been blindly betting first-half favorite and Over, much more than in the past. That’s been a big loss for us also,” Stoneback says. “The public has just cleaned up in these playoffs. Celtics-Cavs on Wednesday night was the only one we could say was a significant winner. We’ve had several significant losers.”

A big reason MGM books finally got a winner on Celts-Cavs Game 4: the two teams combined for 104 points just before halftime, the first-half total was 105, and Cleveland missed a shot that would have brought in another first-half over.

“We’d have been a big loser if that shot had gone in,” Stoneback says.

Bogdanovich said 2017 as a whole has generally been a boon for the squares and a bust for the books. Like Kornegay, he noted the NFL playoffs were a big loser in January, as was Clemson’s victory over Alabama in the College Football Playoff title game. Clemson was an underdog in that game, but everybody was on the Tigers in the championship rematch. The Patriots’ miraculous comeback for a 34-28 Super Bowl victory soiled William Hill’s ledger for February, as yet another favorite-and-over cashed.

“March and April, that righted the ship. March Madness was great, and baseball and NBA were good in April. But that’s obviously turned in May,” Bogdanovich says. “Baseball has been no good, with favorites and popular teams winning, and there’s been plenty of Overs too. And it’s the key Overs, the ones that look obvious, where the public says, ‘Wow, there’s no way this can’t go Over.’ When those go Over, you’re gonna get hurt.”

All three bookmakers agreed about what’s gone missing for far longer stretches than normal the past several months: unpredictability. That element of sports, where underdogs pop up more often to nab not just covers but outright wins, is generally what keeps prolonged streaks from happening and sportsbooks can absorb the short streaks.

“The unpredictability just hasn’t taken place as often in six or eight months,” Kornegay says, reminding that it’s not sharp players cashing all these tickets. “What we’re seeing is not so much wiseguys, it’s the general public. A lot of things lately have been playing out true to form. The perceived better teams have been winning these games. And parlays, our bread and butter, are the ones that are biting us on the behind.”

Kornegay, Bogdanovich and Stoneback have been in this industry a long time, so all certainly understand the cyclical nature of the business. But those cycles might last a week or two, maybe a few weeks in a football season, not – as Kornegay noted – from October right through the playoffs in the NFL. And certainly not followed by favorites and Overs ruling the day in the NBA playoffs.

That said, these sportsbook operators aren’t throwing a pity party, understanding none would be forthcoming anyway.

“I’m not looking for sympathy. I’m just trying to explain what’s happening. I’m not sure if I can explain the results,” Kornegay says. “We’ve seen streaks before, but I’m not sure we’ve ever seen a prolonged streak like we’re in right now.”

All they can hope for is that the NBA Finals bring a positive wake-up call to this extended nightmare. 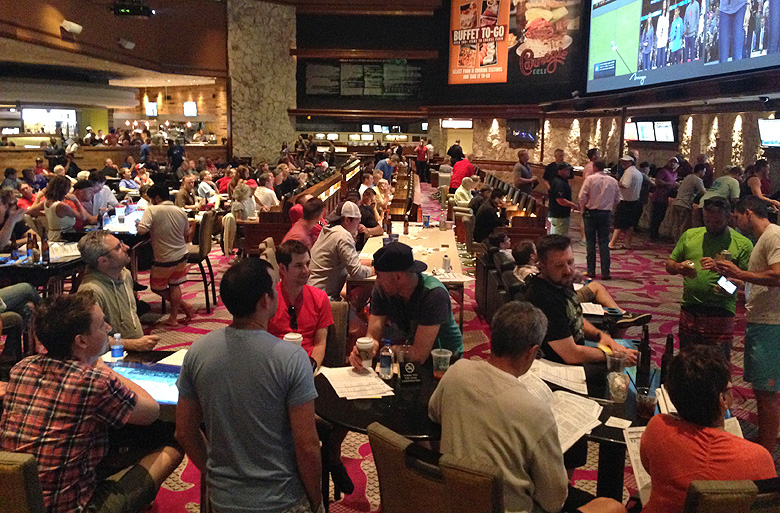 Season of the Square: Public bettors have been beating Las Vegas bookies for eight months
Provided by