Nuggets vs Bucks Picks and Predictions: Bucks Cruise With Stars Back

With Giannis and Middleton back in the lineup, the Bucks appear to have shed a midseason skid that saw them go just 8-9 in a 17-game stretch. With all of its star power back, our NBA betting picks expect Milwaukee to roll.

The Denver Nuggets (34-14) secured a quality road win on Tuesday night against the Pelicans and will stay on the road for a back-to-back with Wednesday night's game marking their sixth game in nine days.

The Nuggets have won ten of their last 11 and are 20-4 dating back to early December, and will look to keep the momentum rolling.

Ahead of them on Wednesday night are the Milwaukee Bucks (30-17), who have faced a rough stretch (8-9 in their last 17) amidst injuries to both Giannis Antetokounmpo and Khris Middleton. Both returned to action on Monday and are ready to go for this huge cross-conference showdown.

Continue reading for free NBA picks and predictions for the Nuggets vs Bucks matchup on Wednesday, January 25.

Nuggets vs Bucks picks and predictions

As of today, both the Denver Nuggets and Milwaukee Bucks are safe picks as serious contenders in their respective conferences, but when it comes to their play as of the last month or so, they've faced different strokes of luck heading into this showdown on Wednesday night.

They are playing cohesive, team-oriented ball (third in assist percentage) while also managing to take care of the rock (second in assist-to-turnover ratio). It's resulting in quality looks, ranking second in the league in both effective field goal percentage and true shooting percentage. And to top it off, they are playing proficiently on the boards as well, ranking sixth in rebounding rate during that span.

Opposite of them tonight is a team that has faced quite the opposite for the last month. Since December 21, the Bucks have gone 8-9 largely due to absences from Giannis Antetokounmpo and Khris Middleton. Their offensive has expectedly stalled out (26th in offensive rating) and their defense has dropped from second prior to that stretch to league average since.

But both Giannis and Middleton returned on Monday night and the Bucks exploded for 150 points in a win over the Pistons. Giannis turned in 29 points (20 of which came in the first quarter) and 12 rebounds, even chipping in a solid performance from three (2-for-4). Middleton operated off of the bench but chipped in eight points and four assists.

Jrue Holiday chipped in 16 points, seven assists, and four rebounds despite a poor 3-point shooting night. Holiday should be commended for his play while his two running mates were out of action, averaging 25.6 points and 8.7 assists in the last seven games while shooting 40.4% from three.

If Monday is any indication of what Milwaukee is capable of with their three stars at full health, then even the seemingly large number of -8 is not as big of a hurdle as it may seem.

A) Get three 25% profit boosts for any NBA game tonight at DraftKings! Opt-in Now

The Nuggets are 24-23-1 against the spread, good for the 14th-ranked cover rate in the league. As road underdogs, they have gone 4-3, and they have fared very well even with a rest disadvantage, going 9-5 in that split. On back-to-backs, however, they have gone 3-3.

Despite their absurdly impressive results in the win-loss column for the last month and a half, Denver has failed to cover in three of their last four and four of their last six. Prior to that stretch, it had covered in ten of its previous 13, possibly demonstrating a market correction.

The Bucks are 24-23 to the Over but have played to a league-best 16-7 to the Over at home (69.6%). They have also gone 10-6 to the Over against the Western Conference this year, which is a continuation of their 20-10 record to the Over in the same split last season.

Milwaukee has gone Over the total in three of their last four but had gone Under in the four prior. On totals of 230 or more (tonight's total is a lofty 231.5), the Bucks have gone Over in four straight and have gone 7-2 that way on the season.

Denver is 26-22 to the Under this season, good for the fifth-friendliest Under record this year (54.2%). On back-to-backs, however, the Nuggets have gone 5-1 to the Over — the second-best Over rate in that split this year. That is part of a larger trend, having gone 19-13 in that split since 2020.

The Nuggets have gone Under in seven of the last nine and have played in six straight games now with a total north of 230. They have gone 6-2 to the Under in their last eight totals at or above that mark.

On games with a total of 230 or higher, the Bucks have gone Over in seven of their last nine and in four straight. Find more NBA betting trends for Nuggets vs. Bucks. 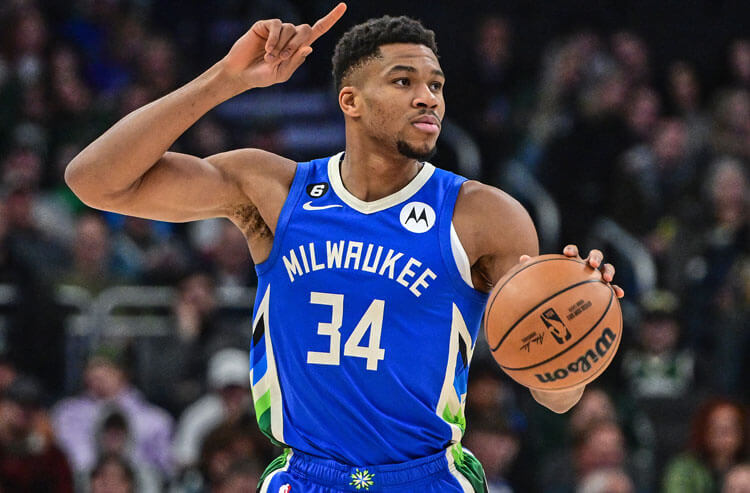 Nuggets vs Bucks Picks and Predictions: Bucks Cruise With Stars Back
Provided by