Damian Lillard's got a capable crew of scorers around him, so while the Nets throw all their limited resources at him, the rest of the Blazers will be able to make them pay. Find out more with our NBA betting picks.

The Brooklyn Nets are back to their old ways. The team looked to be taking a positive turn after making former head coach Steve Nash the fall guy. They appeared more interested in playing defense and giving more opportunities to talented players like Cam Thomas, who previously received DNPs on the bench. That hope has already faded.

On the other hand, the Portland Trail Blazers are an exciting surprise team with the third-best record in the entire NBA. Damian Lillard has proven that he is still in his prime and the Blazers need to be taken seriously. Look for him to get his teammates involved early and often.

Find out the best options with our free NBA picks and predictions for the Nets vs. Trail Blazers on Thursday, November 17.

Brooklyn looks closer to a rebuilding team than a title contender. Tensions appear to be building again, with Kevin Durant recently critiquing his teammates, insinuating that they aren't good enough.

Tonight feels like another ugly loss is on the way, and it will be at the hands of Damian Lillard. The 32-year-old star has reestablished himself as one of the best basketball players after missing a ton of time last season. Against a soft Nets perimeter defense, Lillard will have little issue getting to his spots and taking this one over.

Over his last three games, Lillard has seen the floor exceptionally well, combining for 30 assists. Portland is a young team with a lot of potential, and Lillard trusts them with opportunities to score more.

Brooklyn is surrendering the third-most assists per game to the opposing point guards this season. The Nets will throw everything they have against Lillard to slow him down, leaving teammates open consistently.

The Nets and Blazers have been underwhelming against the spread this year. The magic number for the Blazers tonight is 111.7. That’s the number of points the Nets allow per night, and when Portland hits that mark, it’s 5-1 ATS.

Portland has been exceptional against the spread this season, as odd makers are still not showing them the respect they deserve. The Nets are a ship that's sinking fast and has been brutal on this road trip, losing to the Kings and Lakers.

The -2.5 spread here feels entirely too repeatable for Brooklyn. The last game on a road trip is typically brutal, and the Nets dropped the previous two games by a combined 45 points.

The Trail Blazers are 5-0 ATS in their last five games playing on one day's rest. Portland is a competent basketball team with more reliable scoring options than the Nets. Brooklyn is reeling, surrendering 153 points to the Kings, the most in a single NBA game this season. Now they have to see "Dame Time" in Portland. Good luck.

While the Nets and Blazers have poor Over/Under records this season, tonight's matchup could be an excellent time to consider the Over. The Nets defense against the Kings was simply laughable, and they didn't contain the Lakers last Sunday, either. For the year, they rank 22nd in defensive rating and have given up the third-most points per game over the previous three contests.

The average Over/Under total for Portland going into a game this year is 114.2 points, 3.2 more than the 111 that Vegas figures Portland will score. The Nets won't win tonight, but they can’t have a less spirited effort than their past two outings.

Portland has a deep roster that will make it difficult for the Nets to get stops. Lillard, Anfernee Simons, and Jerami Grant are all averaging over 20 points per game. That's a lot of firepower that will likely drive the score up. They cover the Over easily tonight.

Over is 6-1 in Trail Blazers’ last seven vs. a team with a losing straight-up record. Find more NBA betting trends for Nets vs. Trail Blazers. 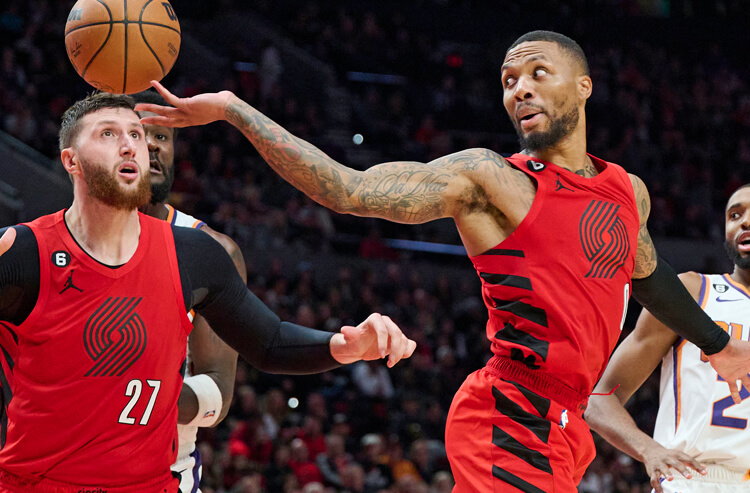