The Brooklyn Nets were priced between +1,300 and +1,700 on the NBA moneyline odds to defeat the Milwaukee Bucks outright on Tuesday afternoon.

As the cliché goes, every dog has its day. And sometimes, it’s a really big day.

The Brooklyn Nets went off as 18.5-point underdogs against the Milwaukee Bucks on Tuesday, and ranged from +1,300 to +1,700 on the NBA moneylines to win outright against the top team in the NBA. Given those long odds, the Nets had about a 6 percent chance of upsetting the Bucks.

If things weren't weird enough in the bubble, Brooklyn went on to shock Milwaukee 119-116. That gave way to some huge NBA betting paydays for bettors brave enough to trust their cash with a depleted Nets squad.

Bettors cash in on Nets moneyline

The Nets led almost the entire way against the Bucks, who limited their starters to 20 minutes or less in the loss. There weren’t a ton of Nets moneyline believers, but at such sizable odds, it didn’t take many cashouts to sting the bookmakers a bit.

Nick Bogdanovich, director of trading for William Hill US, had a typically succinct response: “Shrewd.”

Equally as shrewd were handfuls of bettors at other books. Johnny Avello, director of sportsbook operations at DraftKings, said his shops “had a few at $500 a pop, and numerous little ones.” FanDuel Sportsbook reported an $800 bet at +1,300, which won $10,400.

And in Las Vegas, SouthPoint sportsbook oddsmaker Jimmy Vaccaro tweeted out that one customer had $800 on the Nets moneyline +1,600, for a win of $12,800.

“No one played the Nets moneyline,” DiTommaso said.

ESPN’s David Purdum reported that the Nets’ victory was the largest NBA upset spreadwise since the Mavericks beat the SuperSonics as 19.5-point underdogs in April 1993.

While the Phoenix Suns weren’t nearly as big an underdog as the Nets on Tuesday, Phoenix was generally in the +300/+325 range on the moneyline for its contest against the Los Angeles Clippers. The Suns, who were 8.5-point underdogs on the point spread, led for a significant chunk of the game and won 117-115 on a buzzer-beating fallaway jumper by Devin Booker.

Surely, nobody thought to put much money on a Nets-to-Suns moneyline parlay, right?

As it turns out, FanDuel Sportsbook had one customer make just that wager, for $200, cashing out with a tidy $12,250 win – reflecting odds of about 61/1 for the two-team underdog play.

But wait, there's more, as it turns out. On day where underdogs went 6-0 ATS and 5-1 SU, one BetMGM customer had an $80 underdog moneyline parlay ticket on those five pups what won outright: Nets, Suns, Pacers, Heat, Blazers.

That ticket proved to be the biggest reported win of the day, at approximately $52,800, representing monster odds of 660/1.

Of course, where you have winning bettors, you’re going to have losing bettors. PointsBet USA director of communications Patrick Eichner said his operation saw a “significant number” of $1,000 Bucks moneyline bets – at a whopping -3,000.

But more so, Bucks moneyline and especially Bucks first-half moneyline options were thrown on to a lot of parlays, seen as a gimme way to get a few extra dollars.

“There were a bunch of parlays that were counting on Bucks first half,” Eichner said. 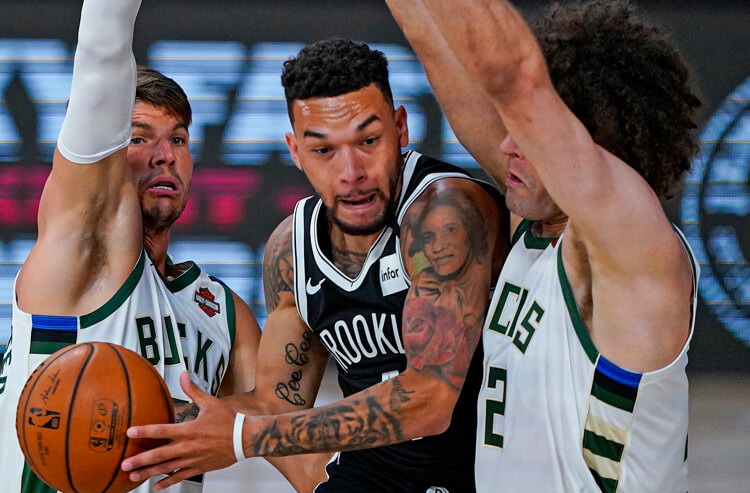