Professor MJ is a statistics professor at Laval University in Quebec City who offers sports betting advice based on his prediction models.

You don’t have time to feel sorry for yourself in the NBA Playoffs. The San Antonio Spurs know that better than most teams, and are coming off a crushing 126-99 loss to the Houston Rockets Sunday night.

The Spurs, who closed as 6-point home favorites, were blown away against the spread, failing to cover by 33 points. But, as one of the most experienced postseason teams still in the mix, basketball bettors expect San Antonio to bounce back in Game 2 Wednesday. And that faith is backed up by an impressive trend for teams coming off a one-sided ATS playoff loss.

I have found an amazing winning strategy by looking at all NBA playoff games since the 1990-91 season. Here’s a look at the number of bets won/lost when betting on teams that lost the previous game of the series by a certain margin ATS:

The overall record of the strategy is good, but nothing to write home about: 839-755 ATS. Still, a 52.6 percent win percentage is enough to overcome the vigorish since you need to win at least 52.4 percent of your bets when betting at -110 or at least 51.2 percent when betting at -105.

However, as you can see, the win percentages generally increase as we move down the table. More specifically, teams that have lost the last game by 12.5 or more points ATS hold a 271-213 ATS mark: that’s a 56 percent success rate. If it got destroyed by 22.5-plus points ATS, like the Spurs did Sunday, that record improves to 67-45 ATS (59.8%).

And what about those teams that didn’t rebound with an ATS win in the following game? Overall, teams losing against the spread on two straight occasions in a series have gone 278-251 (52.6%) in the following game since the 1990-91 playoffs. And, if you impose the restriction of only betting teams that have lost by at least 4.5 points ATS in both of their previous meetings, you obtain a 141-106 record (57.1%).

Sizing up San Antonio for Game 2 Wednesday, oddsmakers were only mildly swayed by Houston’s shocking blowout in Game 1 and have pegged the Spurs as 5.5-point home chalk. 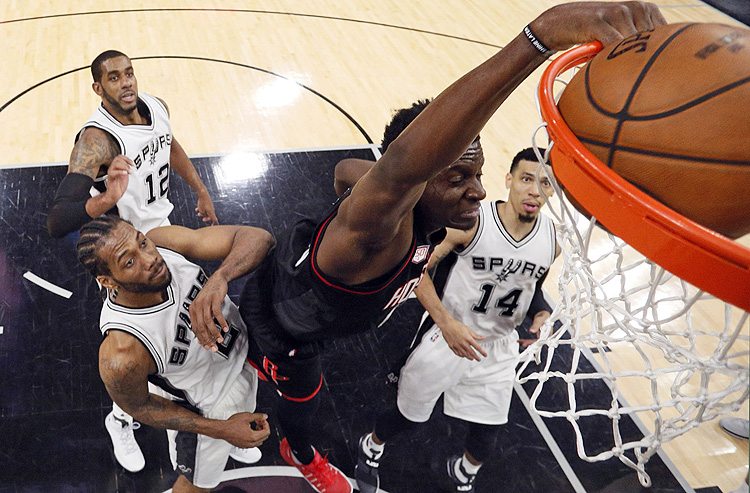