Jazz vs Warriors Picks and Predictions: Not Jazzed Up About Lauri's Line

Lauri Markkanen's been having a standout season, but the Warriors present a unique brand of defense he may not be as inclined to excel against. See why the Jazz's MIP candidate shouldn't see his progress continue tonight in our NBA picks.

Is the bloom coming off the rose for the NBA’s best story? After leaping out to a 12-6 start, the Utah Jazz have now dropped two straight to the Los Angeles Clippers and Detroit Pistons, both of whom were missing their star players.

Their post-Thanksgiving game against the Golden State Warriors might tell the tale, as they try to right the ship against a Dubs team that remains red hot at home on Friday, November 25.

Our NBA picks and predictions for Jazz vs. Warriors zero in on the keys to Lauri Markkanen’s breakout season, and why it may not continue tonight.

Jazz vs Warriors picks and predictions

Lauri Markkanen deserves a ton of credit for his play this season. He’s averaging career highs all over the board, including points (22), rebounds (8.5), assists (2.4) ,and overall efficiency (63.5% true shooting). He’s clearly made strides as a finisher and playing a role as part of a successful team concept for the Cleveland Cavaliers did wonders for his game-to-game mentality.

He’s also benefiting from being in a great team context. The Utah Jazz have committed to playing five-out basketball to a degree greater than any other NBA team this season, and the spacing his partnership with Kelly Olynyk affords him has transformed his game inside the arc.

Lauri is shooting 73% at the rim, nearly 10% higher than his previous career average, in large part because of Utah’s first-in-class spacing. It’s also contributed to him hitting a career-best 51% from the midrange per Cleaning the Glass.

Having both Markkanen and Olynyk makes it difficult for opposing teams to survive playing a traditional center, or even a slow-footed power forward. But that low-hanging fruit won’t be there against Golden State, who will be matching up against that Jazz frontcourt with Kevon Looney and Draymond Green.

Whatever else the Warriors have been struggling with this season, Looney and Green remain dynamite at defending the rim. At just 27%, Golden State allows the fewest attempts at the rim of any NBA team. For perspective, that number is more than 10% better than the worst teams, and that gap is quite literally what makes the Warriors the Warriors on that end.

Golden State is also one of the more effective transition defenses in the NBA for that same reason. With one of Looney or Green on the court at almost all times, they get organized and won’t easily succumb to the Jazz’s pet delay action.

Both Looney and Green are outstanding defenders in isolation and are disciplined switchers, so the confusion the Jazz sew against less formidable bigs isn’t likely to carry forward into Friday’s game. That’s why I think Markkanen is due for an off night.

Much like my prediction for Wednesday’s game against the Clippers, I continue to like this Golden State team when it’s healthy, rested, and playing at home. Their troubles begin when they’re forced to dig deep for bench minutes. Having been home now since Tuesday and with a full rest day for Thanksgiving, I’d expect Steph Curry and the Warriors core to play at or above their season averages in minutes.

As mentioned, the cornerstone of the Utah Jazz’s success is their commitment to playing five-out basketball. But the Warriors shouldn’t have much difficulty matching the Jazz in a shooting contest, nor matching up defensively with Utah’s funkier lineups.

Collin Sexton stepped up admirably last game to the tune of 17 points and 12 assists with Mike Conley sidelined, but there’s no replacing the steadying presence that Conley brings to this roster of misfit toys. If the Warriors shut off the tap in transition and at the rim, they should be in a strong position to cover.

The critical consideration here is that I believe the Jazz will find a way to do their part towards the Over at 237.5. The Over is 4-0 in their last four overall, and is also 4-0 their previous four when their opponent scores 100 points or more in the previous game.

That part is key. The Jazz do sacrifice something on defense by virtue of their spacing-focused offensive philosophy. They’ve been between a Bottom-5 and a Bottom-10 defense all season long, getting by on their commitment to running and 3-point shooting to keep up with opposing teams.

They do have optionality at the five though, with Walker Kessler proving to be a stout interior presence already at just 21 years old. His 4.6% block rate is 98th percentile among all bigs per Cleaning the Glass, and the Jazz are 7.8 points better on defense with him on the floor, both of which are almost unheard of for a rookie center.

Even though I expect the Warriors to do better than most limiting Utah’s preferred brand of basketball, I also think that Golden State, and Steph in particular, are going to run roughshod over this Utah defense. I’d lean toward the Over at this number. 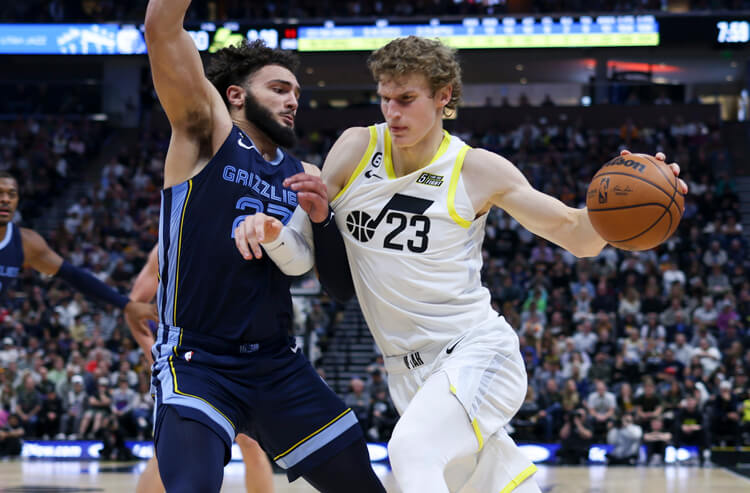 Jazz vs Warriors Picks and Predictions: Not Jazzed Up About Lauri's Line
Provided by